Taking the helm of the former Jovar Empire, the Joran Planet Alliance is the remaining territory that did not secede the Empire and join forces with Jem'rar and the Jovar Socialist Republic. Bent on leading through the ideas of republicanism, the JPA, weakened by The Split, focused on simply rebuilding and regrouping, hoping to gain an intergalactic position similar to the former Jovar Empire's. It's ultimate goal, however, remains quite simple: defeat the JSR, and reunite the Jovar species under one flag once more.

Though they succeeded the once-vastly powerful Jovar Empire, looking at the JSA in its present state, one would not be able to see the resemblance in the slightest. Its army and navy was crippled, and its financial wellbeing was nonexistent. Its many colonies lay in ruins, and constant threat of inevitable JSR invasion only made the outlook bleaker.

But all was not lost: in the midst of the vast turmoil and confusion, the JPA had been able to preserve what was most important to the Jovar as a race: Jora, Hgor, Auder-2, and Haelsier. To a degree, the JPA had one a battle over the JSR: not a physical one, but rather a psychological one. And, in the minds of the citizens, this was all that mattered.

There was something, however, that the denizens of the JPA desired: a republic. Initially, Vromm III rejected the idea. He knew from example, particularly in the case of humans before spaceflight, what a republic could potentially become. In particular, he focused on the old United States of America, and how over time, it became gradually less republican, and more oligarchical. But the people continued to plea for the republic they so dearly sought to have. Quoting the old Benjamin Franklin, Vromm finally gave in, saying simply:

“I shall give you what you desire, a Republic. But only if you can keep it.”


Shortly after the ratification of the new constitution, which effectively created the JPA, however, Vromm was assassinated by a rogue JSR terrorist, though no one could actually prove that he was indeed the assassin. Now leaderless, the new Congress was forced to pick a new leader. They almost unanimously picked the old, wise, and experienced Captain Jovar III to lead the nation. But Jovar was wise enough to know that this was a ancient mistake; he was a man of war, not of peace and politics. And frankly, the last thing the JPA desired was a war with anyone.

Much in parallel to the Weimar Republic that predated the JPA by several centuries, the nation quickly fell into economic recession, and a period of massive inflation. In stark contrast, their rival Jovar Socialist Republic quickly flourished under it's new socialist economic policy. This was do somewhat in part to the fact that no major bank would back up the JPA's currency, rendering it somewhat worthless on an intergalactic scale. Internally, the JPA's economy was in shambles, with many of it's people living under the average poverty line. Hunger, lack of proper housing, and disease became a quite prevalent normality in the Alliance. Even the once Utopian-like planets of Jora and Auder-2 became slums, do to a lack of proper housekeeping.

Jovar's popularity quickly plummeted, though in the first official elections no other candidates were widely popular either, thus securing the aged war hero a second term in office. It was in his second term that the JPA would soon begin to climb out of its economic recession and begin again to traverse on the road of prosperity. In part, this was due to Jovar hiring a completely new board of advisers to help guide him in governing a nation and a species which, frankly, did not have a long tradition of republicanism or democracy.

With a slew of new social and economic policies, Jovar was able to climb out of debt and inflation. In the first year of the new term, Jovar was able to increase production of all goods by nearly 85%. The military also increased in size, and the borders grew slightly with the addition of several hundred colonies. And most importantly to the Jovar, Jora and Auder-2, which contained 3/4 of the Alliance's population alone, were cleaned up and restored to their former Utopian presences.

Satisfied by the progress made within the republic, the aged war hero quietly stepped down from his position of president, as it soon became a stressful ordeal no longer bearable. He was soon replaced, and thankfully for the young republic, these new presidents continued on with the reconstruction policies sought after by Jovar himself.

However, to the west lied a not-so-satisfied power, which grew startled by the JPA's sudden successes. Although they still remained much more powerful than their republic counterpart, the JSR grew wary of the Alliance's intentions, and made quite sure of their desire to protect their assets, particularly in Osion...

The successor to the Jovar Empire surprisingly gained very little territory once owned by the JE. Most of it was either captured or simply joined the JSR by choice. To make matters worse, all of the Galaxon territories were also swiftly acquired by the JSR, with the aid of the Confederacy of Allied Systems.

The JPA, however, were able to keep three vital planets, in Jora, Auder-2, and Earth. Their smaller territory was easier two defend, an advantage for the much smaller fleet. Greater still, the URC, extremely close allies of the JE/JPA, allowed the Alliance to colonize 500 systems in the Cyrannus Galaxy, for the purposes of supplying and supporting the home empire far away in the Plazith Rim.

As the nation began to flourish in post-Split history, so too did her borders, which slowly expanded eastward, though severe competition for Jovar colonies grew along the JPA/JSR border. In the end, however, both nations were left satisfied by their territorial sizes, with the JSR having acquired their vast "living space," and the JPA having obtained enough starspace to keep it's meager population in contention.

The Alliance's military, while strong and mighty, is nonetheless notably weaker than most other nations of her size and stature, and much smaller than her rival/enemy, the Socialist Republic. This is in part due to the JSR's ownership of the Jovar Empire's original fleets, leaving the JPA with only reserves, or fleet commanders that mutinied from the JSR. However, the JPA has begun to combat this lack of military prowess by the construction of new, fast, and powerful capital ships, with the ultimate goal of replacing the aging Ardent-class star destroyers. 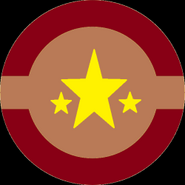 Insignia of the JPA Navy (identical to the Jovar Empire's)