Realms of the Gods

Life must be nurtured

Mouth of Ultimate One, unofficial leader of the Atlantica

Protector and shepard of all Quadrantia life.
The Atlantica known as Indris, better known as Mouth of the Ultimate One, Representative, or simply as the Mouth is a powerful entity bound to the Realms of the Gods and the Rambo Pantheon.

It is also said she is the only Atlantica who ever sees or speaks with the Ultimate One and has his blessings.

Idris came into excistance long before most of the other Atlantica as she was the first life created by the Ultimate One to aid him in creating his Utopian Dream.

The Utopian Dream eventually came into excistance with the creation and forming of the Quadrant Galaxies. Over time, Idris, who was a spoke person for the Ultimate One for mortals gained her nickname, the Mouth from the Aininyë. The Aininyë were a humanoid species created by the Ultimate One, in hopes they would seed the Quadrants with a variety of a life. They eventually did so, and those who ascended became known as the Atlantica and began inhabiting the Realms of the Gods. As such the Mouth, became the unofficial leader of the Atlantica as she is the only who speaks with the Ultimate One for his guidance. To preserve the peace among the Atlantica, and improve their own relations and cooperation she gained the power to summon all Atlantica for meetings, who most obeyed without questions.

With her guidance the Atlantica made peace with the Oikoumene and began working together with them. During their prime era, known as the Apotheosis- she welcomed the Oikoumene known as Libraé to the White City and guided her to the entrace as she was allowed to meet with the Ultimate One himself. After Libraé returned, a few weeks had passed and all the time Idris remained in meditation, waiting for the day she returns. Upon her return Idris asked if he managed to answer he questions so she could walk the path of the right direction. Libraé replied that she believed he had, but looked in strange direction with a smile- to both Barthandeal and Idris confusion. When Libraé was send back by the Arbitor, she sensed something accompaning Libraé, but couldn't really figure out what or who it was.

After countless of years, around the date known as 16 BQF- Indris decided to visit the mortal world and she decided to visit the planet known as the Rambo Capital. Wondering the endless shores, enjoying nature she met a irresponsible, stubborn troublemaker yet quite charming and attractive humanoid known as James Rambo.

James, at once asked Indris out for a date. Unsure what to do with such emotions she decided to accept it. After a diner, the two walked along the beach where James asked why Indris, who also looked like a humanoid, wore such an interessting choice of cloathing. Indris laughed, commenting on his own Academy uniform. James confessed he joined the Academy of Rambo Nation to follow his dreams to become a star-captain with a ship of his own to command. Intrigued Indris listened to him with all her attention and felt more and more attracted to him. He said he could join the Academy due to him being a humanoid. When James asked something about her own life, she remained vague upon it. Intrigued James asked if she liked their date and at sunset he kissed her.

The two continued to date a while more and even had interaction witch eachother, wich resulted in Indris becoming pregenant. Fearing that the Atlantica would condemn her for it, she kept it a secret and remained at James' appartment for a while. While James graduated and Indris giving labor in 15 BQF to their child, who they called Claire Misca Sancest was a beautiful daughter. Sadly, the other Atlantica eventually discovered it but forgive Indris for this "mortal feelings". Forced to return to the Realms of the Gods, she left both Claire and James behind, much to the concern and surprise of James. For the Nation, it seemed Indris simply vanished from excistance, an event that still haunts both Indris and James.

Though following how Claire and James lived, she wished to tell them about her and her Atlantica heritage, but wasn't allowed to go to the mortal realm anymore.

Decline of the Atlantica[]

Over time, she was unable to prevent Artmyris' rebellion and the decline of the Atlantica. When the Clash of the Gods began, she became instrumental in providing the Atlantica with the means of setting up a defense against Artmyris and his demon allies. Much to her horror, she witnessed the awakening of the Ultimate One who exiled Artmyris to the Void, an eternal prison. The Ultimate One instructed Idris to do better, as he disliked to interfere with "Atlantica" and "mortal" matters. As the Clash continued, she used her powers for another summon. During the meeting the Atlantica seemed to be divided, as some wished to combat these new threats, while others wished to remain ignorant of it. The meetings was fierce, but with no real results the Atlantica left in confusion, a first in their excistance.

Sadly her troubles were far from over, as shortly after both Selenyia and Komamura were killed by new enemies. These enemies turned out to be the returning Mornûnendur and the dreaded Desolation Hivemind. She learned as well that the evil and feared Xhodocto managed to infriltrate one of their own within the Quadrant. Angered, Indris decided to act and send Quetzemet to deal with the Xhodocto, while she send Barthandeal to send a warning to the Mornûnendur, as well as Horus to prevent the mortals of making a vital mistake by closing an important wormhole. Afterwards she and Barthandeal went to face the Desolation Hivemind, who were corrupting the Realms of the Gods.

During the battle, both Atlantica fought with great valor, but the Hivemind seemed to be more powerful and the Atlantica to be less due to their terrain losing. During one of those battles she had to retreat due to the overwhelming numbers as well as due to the reason she was wounded during the battle. After she healed the sudden appearance of Antedivulian, the master of the Mornûnendur offered peace wich the Atlantica accepted. Afterwards all hostilities seemed to vanish against the Atlantica and they began enjoying peace again.

Yet her troubles remaind, as the higher plains returned to peace, within the mortal world a desperate hunt for an Atlantican artifact threatened the balance of the Quadrants, as well as the life of her daughter, Claire Rambo. During the Hunt, the Atlantican fortress planet known as Aecor was discovered, much to the dismay of the Atlantica. To complicate matters, one of the demons known as Morgandaûr was also searching for it. 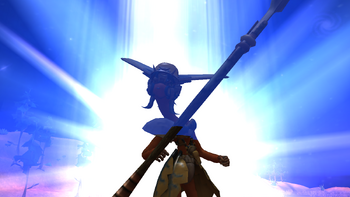 This Atlantica girl, though ancient with an ever lasting young spirit is known by the other Atlantica as the Mouth. As the first Atlantica created, she is the representative of the Ultimate One, to whom she is fiercely loyal to. Due to her position, she became the unofficial leader of the Atlantica with the authority to give them orders and to summon them when inquired.

Even though her age, she has a young and joyful appearance, always concerned with the well being of mortals she likes to have fun as well. She is very eager to learn, welcome to all who are friendly against the Atlantica and has a kind and loving personality. Sadly due to her mortal affair, she is forbidden to see her lover and child- an event that still haunts her.

As a weapon, she wields a large lance and a limited control over the elements that protect the Quadrants. She is very loyal to the Ultimate One and she would sacrifice her life for him if needed. She lives in the White City within the Realms of the Gods and is considered the most powerful of all the Atlantica. She is also often seen as the pupil of the Ultimate One and blessed by his blessings. She is closest with fellow Atlantica Barthandeal and Quetzemet, and in lesser extent with Horus and Cropler. She despises Artmyris and actually fears the Forgotten Dark Lord.

Within the Rambo Pantheon, she is only known as the representative of the Ultimate One and one of the least known Atlantica.

“Those special to me!”

“They deserve my honor!”

“Suffer the wrath of the Atlantica!”

“You have my blessings my child. You are my voice among the Atlantica, my eyes against my enemies and the trust to shepard the Quadrants in my absence!”

“My beloved love interresst, why did you suddenly leave?”