Borealis belongs to those who can exploit it.

See below
“The Polar Crystal Alliance is an offense to us. The Hegemony will bring glory to Borealis the only real way: ours.”

The Imalmah Hegemony was the empire of the Imalmah and one of the most influential criminal societies of the Borealis Galaxy after the Wranploer's empires.

The Imalmah Hegemony's origins are ambiguous thanks to the heavy amount of censorship implanted by its government. Its earliest known sightings by other species come from around 563 BC, meaning the Hegemony is around 3000 years old. The Imalmah expanded through the Arm of Wildness on the Wranploer's backs, taking opportunities they left behind and creating a big area of influence around the Arm. Imalmah slaver rings started to be formed around their territory, giving them a fierce reputation. The Hegemony was not present during the First Borealis Galactic War, where it remained neutral to the entire conflict, but it is implied they have caused terrorist attacks on the Wranploer Legion with the intention of weakening it for the old Polar Crystal Alliance. On the following years, the Hegemony remained neutral to other species, expanding their influence and siding with the Old Niaka Order upon the formation of the Niaka Special Forces.

The Hegemony had very minor involvement during the Second Borealis Galactic War. During the Borealis Grox War, the Hegemony launched an attack on the Ailhon Guild of the Egelielano with the intention of destroying it and looting its remains for themselves. However, thanks to intervention from the Niaka Special Forces, the conflict was solved peacefully and the Hegemony lend their support to the Polar Crystal Alliance. The Hegemony would later be one of the many empires present during the Symphony of Flesh and Steel, where they helped push into Grox territory to eliminate them permanently.

During the Ice Age, the Hegemony found themselves victim to multiple attacks from the Unified Nation of Ottzello during their rebel moments in the Polar Crystal Alliance. Fleet Commander Bakarl terrorized the Outer Core, most specifically the Rafows race, until he was stopped by Vekaron and his team. During the fifth year, the Imalmah homeworld of Xtronznarter was attacked by Agent Chi and the Children of Synthesis, which resulted in the deaths of all Imalmah Highmasters, causing the Hegemony to fall into disarray. Later, a killing blow was delivered by the Children of Synthesis, who swarmed into the Imalmah's worlds and destroyed the entirely of their population, so that their flesh could be used to help fuel the World of Corpses.

The Imalmah were crafty and deceptive creatures, allowing them to fool their enemies with clever tactics and traps. They also possessed the ability of reading through the body language of another being, allowing them to guess what they wanted or what they could do next. A trait of their biology which acted both as an advantage and as a disadvantage was that their brains were located on a stalk-like organ, outside of their skull. It was an upside because it made headshots against an Imalmah deal standard damage, but a downside because severing this stalk would kill the Imalmah instantly.

Imalmah society was notable for being oppressed and extremely censored. Entering and leaving Hegemony territory was a very bureucratic and bothersome process which discouraged aliens into venturing on their planets. Imalmah had a strong sense of superiority and often believed other species were less intelligent than them unless proven otherwise. Slavery was a key part of Imalmah culture, with their slaver rings being feared across the galaxy. Imalmah were ruthless and merciless with their slaves and often targeted more vulnerable targets such as independent criminals, drug addicts, or even pre-spacefaring planets. The Imalmah's aggression and lack of empathy for others gave them a terrible reputation across the galaxy, but it should be noted that more passive and friendly Imalmah existed, often rogues from the Hegemony. These rogue Imalmah were more commonly found acting as merchants in space stations or multi-species planets.

Imalmah under the Hegemony lived in practically standard environments. Cities ranged from heavy populated centers to rural villages and the population ranged from rich to miserable. Though, the rich were often more exploited by the Hegemony's government and as such, their wealth was often lower than in other empires. Imalmah were also known to be spread across multi-species planets and space stations, where they could acts as criminals, mercenaries or simple merchants. 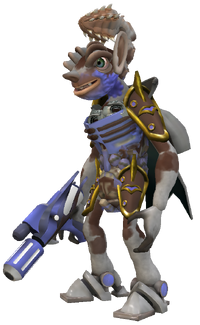 “I am committed to the will of the Hegemony.”

Fleet Commander Bakarl was one of the highest military authorities of the Imalmah Hegemony. Because of the Hegemony's lack of a developed military structure, most other races saw Bakarl as a simple successful pirate captain. He was under control of a powerful fleet and was famous for his various raids across the Arm of Wildness, and notably on the Rafows, natives of the Outer Core.

During the Ice Age, Bakarl resumed his terrorist across the Outer Core and was a constant antagonist to the Penumbra Unit. However, at the fifth year of the Ice Age, Bakarl was slain by Agent Chi after he attacked the Imalmah homeworld of Xtronznarter under Angazhar's orders.

“You are still not allowed on our territory.”

“Get out of our territory.”

“To the slave rings with you.”

“You demand subjugation and slavery. I do not tolerate your kind.”