Presence in multiple realities and timelines

The Icolian Assemblege is a faction of Icolians native to the Odysseia Region of the Cyrannus Galaxy. The Assemblege covers only a small region of space to the galactic north of the Jenassian Regency, though possesses a level of technological advancement that exceeds many of their more famous neighbours. These Icolians exist seperately from their cousins in the Quadrant Galaxies, but are known to act as one on many occassions.

The Assemblege exists in a region of space in which the fabrics of space time are very weak, allowing them access to different futures and timelines as simply as other races might travel through space. Like the Icolians of the Quadrants, the Cyrannian Icolians are highly xenophobic and it is incredibly rare for them to leave their meticulously patrolled space. However, in the aftermath of the Great Cyrannus War the Icolians began to leave their space with greater frequency, perhaps indicating that they are searching for something.

The history of the Icolian Assemblege is clouded in history with the details of their supposed split from the Quadrantian Icolian a matter of conjecture and debate. However, the Icolians themselves maintain that no split occurred and that the Cyrannian and Quadrantian Icolians are united in a way similar to the Neraida Gigamatrix. The Cyrannian Icolian are believed to be native to Icolia deep within their controlled space in the Cyrannus Galaxy, an area of the galaxy in which the boundaries between realities is very small, allowing the Icolians to freely travel between dimensions.

During the Dark Times, due to their presense in the north of the Odysseia region - they prevented the Jenassian Regency from expanding in that direction. In the fourth month of 03 NE Icolian forces intercepted a lone Jenassian cruiser who entered their borders which recently rotated. The Jenassian cruiser ran upon a mine, disabling her engines when suddenly, the Icolian arrived, giving them a two hour time-limit to leave their borders.

Unable to comply, the Jenassian captain tried to defend his ship and fired upon the Icolian cruiser. In response four more Icolian light cruisers appeared and began trapping the Jenassian cruiser in their energy web and destroyed the vessel and most of it's crew, though some escape pods managed to evade the Icolian. This act raised the tensions between the Jenassian and Icolian as the Assemblage were growing tired of the Jenassian interference and stubbornness.

The Assemblage is a highly xenophobic and alien civilisation that bares few similarities with any other Cyrannian civilisation. They are generally not understood by other civilisations due to their aggressive nature, refusal to engage in diplomacy and their rotating borders. The Icolians find it distasteful to interact with alien civilisations though often use captured reptilians and humanoids for slave labour in mines or warfare. There are three castes in Icolian society, warriors, workers and rulers, who maintain different appearances and different customs and social expectations. 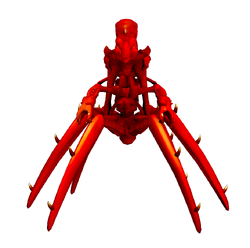 They are generally no reports of an Icolian coming face to face with an alien lifeform, but the following information can be summised. The Icolians are a crystalline insectoid lifeform with a transparent, though visually red carapace. They have two gleaming eyes, two arms and multiple spider-like legs. While they aren't believed to have a hivemind, an Icolian is essentially immortal, when the physical body dies, the consciousness simply latches onto a new host.

Icolians have three castes with varying degrees of similarities to each other. However, they all share the above features in common. All Icolians communicated in seemingly unintelligible chirps and clicks, though this language is in actual fact far more advanced than many others in the galaxy.

Though the Icolians occupy several different timelines and dimensions consistently, their space remains relatively similar in all of these individual universes in that they control large portions of space in the Odysseia Region of the Cyrannus Galaxy, north of the Jenassian Regency and the New Cyrannian Republic. Like the Quadrantian Icolians, the Assemblege's space is in a constant state of expansion and contraction, often forcibly annexing systems that they claim to be their own, despite having no claim in interstellar law.

The military of the Assemblage relies heavily on space combat, with Icolian Warships being one of the most powerful in the entire Cyrannus Galaxy, potentially losing out only to the Galactic Empire of Cyrannus and the Neraida Gigamatrix. The Icolians themselves also maintain strings of space stations in hyperspace itself, often launching attacks from these corridors on an unsuspecting planet. 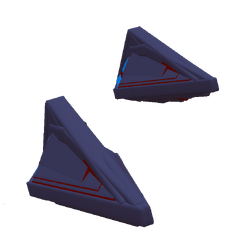 Exactly the same design used by the Icolians in the Quadrant Galaxies. The Icolian light cruisers are the most common and basic Icolian vessel. They are also known as "catchers" by other species due to their unique trait of creating some sort of energy web when teamed up with others of her class. This energy web can disable enemy ships, giving the Icolian time to conquer the vessel or easily destroy it. The light cruisers are 25 meter long and are capable of transwarp are known to be equipped with strong shields and phasers.

“They need a good Star Destroyer where the sun don't shine.”

“Diplomacy is always an option, even in exceptional circumstances.”

“Assimilation failed. Recognise the futility of your actions.”

“It is one thing to keep to your own realm, but they also see completely alien life to them as inferior? Sometimes I simply do not understand aliens.”

“I don't like these scum's attitude. They should learn we can raze them off the map if we decide to.”

“They look adorable! Can we keep one?”

Retrieved from "https://spore.fandom.com/wiki/Fiction:Icolian_Assemblage?oldid=630426"
Community content is available under CC-BY-SA unless otherwise noted.