Supremacy to our Melody!

General of the Hutter Kingdom

Hut'Pmec is a Hutter captain in service of the Hutter Kingdom. Slowly rising to his rank, this experient commander is cunning and dangerous, not to mention ruthless towards his enemies. He is a proud believer in Venocios, the Atlantica who made the Hutter's melody, a strict code of honor and pride.

He is loyal towards his ruler, King Huttelett III and is often seen as his unofficial front line advisor. He commands a D7-cruiser, the Huttlet.

Hut'Pmec is born in an unidentified time period on the Hutter homeplanet, Huttlangia. There he soon was thaught the way of the Melody, wich allowed him to join the Hutter militairy. Over time he graduated and was assigned as an gunner onboard Huttelett's ship, and fougt with him during the Second Galactic War (0 BQF) against the dreaded Imperial Alliance who wished to conquer the Quadrants for their own.

After surviving those events he became fundamental in helping designing the new Hutter V2 fleet, as they wished to be able to keep up with their "allies", Rambo Nation. In grattitude Hut'Pmec was given command of the D-7 battlecruiser Huttlet. He was unable to prevent the destruction of Tigma IV as he arrived to late with his reinforcements and as such he aided in the taking over of a Rambo K-7 listening station. Sadly later on in 02 NE/05 AQF he became involved in a battle against the Galactic Empire of Cyrannus when Mortikran and his fleet attacked and drove away the Hutter presence, losing their foothold in Rambo space and postponing a planned invasion of the Rambo Quadrant 89 Colonial Sector.

Hut'Pmec was stationed at the capital when the bounty hunter Zevracence stole an experimental Bird of Prey, but was unable to intercept the vessel. When the bounty hunter managed to disable the D-5 cruiser of Hut'Kraang, Hut'Pmec recieved orders to hunt down the thief and bring back the Bird of Prey. However Hut'Pmec lost sight of the stolen Bird of Prey when Zevracence took the vessel into Rambo Space, forcing Hut'Pmec to cross Rambo bordes under cloack, in result he could only use impulse and not warp. Hutter Command was furious that he lost sigh of the Bird of Prey and gave orders that he was only allowed to return back into Hutter space if he had the stolen Bird of Prey.

In 03 NE/06 AQF he was send by the Hutter Kingdom as dignitary for the official opening of Lianna station. Once onboard he spend quite some time talking with Proconsul Apollo of the New Cyrannian Republic. He asked questions about current fleet movements and how the New Republic was adjusting herself as the newest interstellar power within the Cyrandia Cluster. Hut'Pmec was also send to gather intelligence upon their stolen Bird of Prey, but none of the dignitaries knew anything about the whereabouts as it seemed the Bird of Prey hadn't been seen in days.

Later on, near the end of the meeting Ramashe made a small speech, informing the others that the Rambo were taking upon their old mantle as peace keepers again. Annoyed, Hut'Pmec reported this troubling report to his superiors. If the Rambo were going back to exploring and peace keeping again, the Hutters would risk exposure with their secret battlestation and battle fleet near New Republic Space south from the Rambo Inner Colonial Sector.

Shorlty after the meeting Hut'Pmec joined vice-admiral Ramcard in a joined task force to combat a Congregation cruiser who had appeared at the NX-Region shortly after Rambo Command lost contact with the USS Enterprise. Hut'Pmec took his D-7 battle cruiser and two D-5 cruiser to engage the dreaded and feared cruiser. However within one volley of the Congregation cruiser's cannons, it managed to desiable the Hutter ships and two of the Rambo ships. The second volley was directed at the USS Dallas and Hut'Pmec and his fellow Hutters were now left to the mercy of the Congregation.

After returning to Huttlangia, the capital of the Hutter Kingdom he was faced with the news that his King had been killed by the elven Sinleri Prince, Kael’Thalas Bloodwing. After listening to his reasons and that of the demonic Liloth, he was persuaded to accept the Prince as his new leader, or his people would face the wrath of the Sinleri. During the second month he was surprised to witness the summit where other species and individuals gathered to all pledge themselves loyal to the Quadrantia Prince, all who feared the expansion of both the Galactic Empire of Cyrannus and the ever presence of Rambo Nation. Founding new faith in the words of the Quadrantia Prince, Hut'Pmec began vital in training the new Kingdom members in the use of the Hutter vessels, though prevented the use of the new D-8 class other then Hutters and Sinleri.

Hut'Pmec is a loyal, cunning and dangerous Hutter officer. Though strict to his fellow Hutters, he shows an active dislike for non-Hutter species, to point of being just rude. Though he holds a certain degree of respect to the Rambo, he is disgusted by Cyrannians and the Xiaans.

Hut'Pmec is ruthless for his enemies, not hesistating to destroy them if they have no use for him. Though he also knows when to take hostages for interrogation.

“You are worthy of my Honor!”

“The Melody predicts your destruction!” 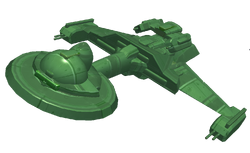 The Huttlet is a D-7 class battle cruiser, named in honor of deceased captain Huttlet who fought during the Second Galactic War. Many Hutters, including Hut'Pmec see commanding a D-7 class as a great honor and take a huge amount of pride in it.

The Huttlet is equipped with the state of the art phasers and disrupters of the Hutter Kingdom, as well as a large armanent of photonic torpedoes and ofcourse a cloacking device. Using the cloacking device means dropping the shields and being unable to use warp speed.

“Haha, try to capturre me you worthless smug!”

Retrieved from "https://spore.fandom.com/wiki/Fiction:Hut%27Pmec?oldid=649735"
Community content is available under CC-BY-SA unless otherwise noted.