Hut'Kraang is a male Hutter, often simply called Kraang; is a captain within the Hutter Defense Force but often also acts on his own, a privilege given to him by the Hutter Chancellor. Born at Tigma IV he was raised as a true Hutter Warrior and has a great sense of honor.

Born in 78 BQF at the Hutter colony known as Tigma IV he was raised a warrior ever since childhood. When he joined the Hutter Defense Force, he was given command of an unnamed D-5 class. He first saw action during the end battles of the Second Galactic War in 0 BQF. After the allied forces were victorious a few years later he aided the Rambo during a battle in the Great Cyrannus War but grew dissatisfied with the Rambo due to their "kind" tactics in battle. Kraang believes you should destroy any enemy, and chrush them will send fear and respect throughout the rest of the enemy' ranks.

Much to his dismay, he was not present when the Hutter Defense Force attacked a Rambo R-7 station. Sadly, in the same year (02 NE), during the Quadrantia Disorder, the Galactic Empire of Cyrannus decided to punish the Hutters for such an attack and under command of supreme commander Zillum the Empire destroyed Tigma IV- homeplanet of Kraang. Furious by the loss of his family he vowed to take revenge on Zillum. Later on he intercepted a message by Claire Rambo who was tracking down an artifact known as the Zevian Skull and decided to track them down and obtain the artifact for the Hutters themselves.

Eventually Kraang reached Quadrant 21 and tracked down the freighter which transported Claire to Quadrant 82. Decloaking the D-5 cruiser disabled the Caizini freighter of S'Rell with a single torpedo. Taking both Claire and S'Rell captive he ordered the destruction of the Caizini freighter. Afterwards he ordered both Claire and S'Rell to be taken to the brick while the crew of the Hutter cruiser set a course to the Q21-Q82 wormhole. 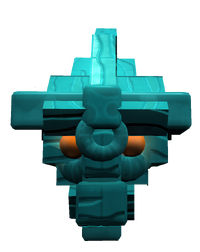 Arriving at the wormhole Kraang and his crew were surprised how busy it was at the wormhole, with ships coming and going to Quadrant 82 as well as three Secoolian ships being present. Learning that Claire her star destroyer, the Infector was travelling to Javan Kraang decided to do the same. After passing the wormhole Kraang was informed by the Hutter Defense Force that the planet they were after was named Kreeta, located in the unclaimed territories of Quadrant 82. A lawless and unmapped area. Changing course Kraang and his crew set course. During the travel the Infector managed to locate them and attacked. Disabling a warp nacelle Kraang was shocked to witness the birth of an anomaly, which turned the space in a bright light and flames. Able to use an emergency warp jump Kraang arrived at Kreeta!

Shortly before arriving on Kreeta Kraang lost his conscious and as a result the ship went spinning out of control. When the ship exited warp they were intercepted by a New Rambo Resistance fleet and he was brought to Kreeta Base for interrogation. After a month in prison the Empire under command of Mortikran attacked Kreeta. During the fight Kraang and his crew managed to escape when they re-conquered their D-5 cruiser. Escaping the battle he returned to Hutter Space to report current events.

He remained at Tigma III for most of the time, patrolling the Rambo/Hutter borders. In the 4th month of 06 AQF/03 NE a new kind of class was stolen by bounty hunters. Intercepting the vessel he was unable to stop it as his own D-5 cruiser was disabled first.

Shortly after the Viral Outbreak at Koerband in the 1st month of ,7 AQF, Hut'Kraang approached the Q89-Q82 wormhole in Q89 to execute a new plan of his. Hoping to gain a new and powerful star ship to command he needed to travel to the Unclaimed Territories of Quadrant 82. To his surprise the USS Victory, a Constellation-Class under command of captain Robert Lefler patrolled the area. Before the Victory could act Hut'Kraang's D-5 cruiser and two fighters decloaked and disabled the Victory before entering the wormhole. 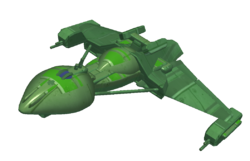 Kraang is a bold and ruthless captain, not hesistating to sacrifice other ships and would even attack allied vessels if they got in his way when hunting for prey. He is a cunning and respected captain within the Hutter Defense Force and is an expert in using de-cloack hit and run tactics. During one of his battles he lost an eye.

He has little love for his enemies, and any loss in battle he sees as a damage to his own honor. He especially dislikes anyone hailing from the Cyrannus Galaxy, viewing them all as arrogant, greedy and without warrior honor. He wears a Hutter armor in battle.

Intercepted by the Ifrit-class Infector (02 NE)

Retrieved from "https://spore.fandom.com/wiki/Fiction:Hut%27Kraang?oldid=699556"
Community content is available under CC-BY-SA unless otherwise noted.