The Grox Imperial Fleet is the military force of the Grox Empire, composed of billions of ships and trillions of soldiers. 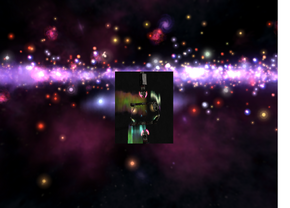 A brain in the center of a galaxy.
Add a photo to this gallery

Singularity Brains are similar to Stellar Engines, they are machines which collect radiation emitted off the accretion disk that surrounds supermassive black holes in the centre of galaxies, where the gas is heated to over a million degrees. Hawking radiation is also collected, and the cores are also an excellent source of exotic matter and antimatter. As it is located in the centre of galaxies, hypermass objects such as tiny singularities and cosmic strings, tend to sink to the centre of the galaxy, which are captured in an electromagnetic lattice, which is used to compute information from wavelengths of gamma rays emitted by the black hole. Although the Grox are not the only empire to use black hole brains, very few others do.

This gives a singularity brain three main abilities, one is a giant simulator of matter and energy, using the AI, for industrial purposes, next as a power source which is linked via Alderson pathways to stars nearby near the core (similar to the DCP's Interstellar gridways). Finally, it is also like a giant weapon (similar to The Culture's Gridfire), where it pinches a shadow brane in subspace, creating powerful compression waves that travel through space at FTL, a weapon capable of disrupting hyperspace travel and destroying unstable stars.

The Grox Meta-Emperor is in fact, a Singularity Brain. He was a Grox once, but had emulated himself into the mainframe surrounding the black hole. 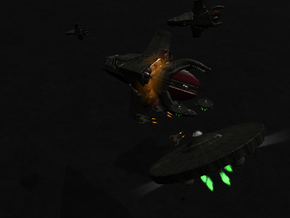 Three Grox Star Destroyers with dreadnoughts and Grox fighters emerging from a hangar.
Add a photo to this gallery

Inspired by weapons such as the Apalos worldship of the Girdo Empire, these gigantic ships of the "Super Star Destroyer" type are the most recent addition to the Grox Imperial Fleet, only appearing at the start of the New Grox Wars. They were originally being built in the Milky Way Galaxy, but were unfinished when Grox Space was invaded so production was moved elsewhere. It is believed that the Grox had shared some technology with the Shadows earlier in the Imperial Civil War, and has two similar technologies, a layer of bioarmour and the ability to phase in and out of hyperspace easily, a function far greater than a cloak. Its Spatial Compression Wave may have been inspired by Gridfire, and can effect ships in Ghost phase.

Grox Star Destroyers are intended to function as mobile bases, and a single one can overwhelm nearly any enemy fleet. Star Destroyers can have a complement of dozens of Dreadnoughts, hundreds of Warships or thousands of Fighters.

The Apalos recently caused the Grox Empire to merge with the Milky Way's Borg Collective (a distant offshoot of the Grox), both assimilated each other simultaneously, although now one entity, most of the inhabitants of the Milky Way refer the Cubes as Borg cubes instead of Grox cubes. 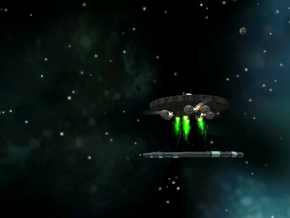 Ominous mothership.
Add a photo to this gallery

The Grox Mothership is a terrifying starship, used by the Grox Empire since the beginning of the first Grox Wars. Although they are rare (only a few million exist), if one shows up in a system, any inhabitants there are most likely doomed. It is armed with multiple Staff of Death cannons, which turn all non-Grox life and technology into grey ooze, destroying all ecosystems and ships on the planet it is aimed at, and can even be targeted against specific ships in a space battle.

Motherships are also heavily armoured, and are able to resist anything less than a hit from a Planet Buster. However, any attempt to fire a Planet Buster at a Mothership will likely result in failure, due to the dozens of superlaser turrets constantly ready to shoot down any approaching projectiles. Even worse, attempts to escape a Mothership's wrath will fail for any ships using warp drives or hyperspace, as its graviton spheres will prevent either form of propulsion from working. 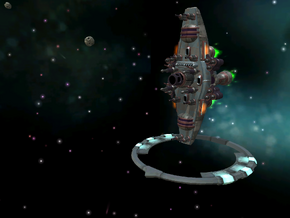 Dreadnought.
Add a photo to this gallery

Grox Dreadnaughts are probably the strongest craft that is considered 'beatable' by most empires. Most fleets planning on engaging a massive fleet of another powerful empire will probably have numerous dreadnaughts within them. 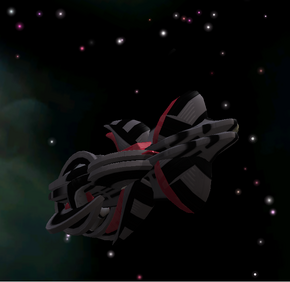 Powerful experimental ship.
Add a photo to this gallery

After the alliance of the Grox and Gar'Skuther, new technologies have appeared. The Grox Annihilator is capable of many destructive powers. It has been seen in production but not in use. 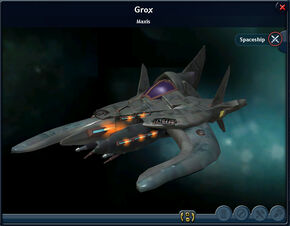 Backbone of the fleet.
Add a photo to this gallery

The Warship is feared by many, and is used as the main assault ship of the Grox. Often they are found escorting Grox Motherships. A smaller variant, the Fighter, is more numerous but weaker and less poweful. Both types, however, are more than a match for the ships of all but the strongest fleets. Grox Fighters are usually unmanned Drone ships, while Warships may have several soldiers on board. 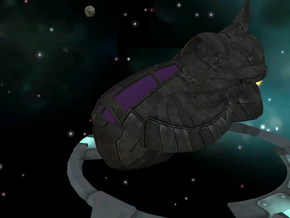 Heavy Warship for space assaults.
Add a photo to this gallery

The Warship Mk II is relatively new in the Grox Imperial Fleet, so very few empires have suffered at its hands. They are often found as backup in small fleets accompanying warships and fighters. They have a relatively large cargo hold for transporting troops.

A few Grox ship classes are no longer in use.

Cruel Hand of the Grox Edit

The Cruel Hand of the Grox-class ships were designed to inspire fear in the enemies of the Grox Empire, and when the form of a giant Grox skull or skeletal hand (of which a Cruel Hand could be either) emerged from hyperspace, entire fleets would be terrified. These ships were known to latch onto enemy ships' hulls and tear them apart, and sometimes a Cruel Hand would grab two ships using tractor beams and crash them together.

The main disadvantage of a Cruel Hand of the Grox was that it was slow, so the best way to destroy one was to send swarms of fighters and bombers against it to wear down its armour. Only a few million Cruel Hands ever existed, and when they were nearly all destroyed with such tactics during the New Grox Wars, the Grox decided not to build any more.

During the Tigris War, the Grox had to make ships out of scrap material and the remains of other spaceships. Their size, shape, weapons, defences, and even propulsion systems all varied. Nearly all of these ships were of greatly inferior quality to the traditional designs.

Only one of these ships, the Daman, survived the war. A typical example of one of these ships, it was 890 metres long yet armed primarily with point-defence blasters and railguns, its only offensive armament being an antimatter bomb launcher. It carried a few hundred Grox survivors to Universe 66501, where it ceased to be a part of the Imperial Fleet as the Grox were able to produce Warships, Dreadnoughts and Motherships again.

Took before escaping the infected planet.
Add a photo to this gallery

Grox Infection Pods are common weapons utilized by the Grox Empire. It is part biological, but with cybernetic intergration. Infection Pods land on planets, their roots penetrate the crust, and using cybenetics, convert elements and minerals into new growth. An infection pod grows rapidally, especially when nanotechnology is concerned. They fly autonomously, however, they are sometimes accompanied by a contingent of Dronox troopers, Scanflies, Insectrox, Scavengers and time bomb-bearing Mites.

It is difficult to stop an Infection Pod from spreading, a planet buster was once the only option. But counter-invasive nanotechnology as well systematic glassing can remove an Infection Pod. Famous battles involving the pods include Infestation and the battle of Bahaha 500, both included the defeat of the Infection Pods. 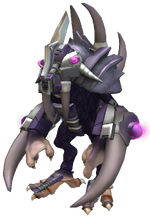 The Conqrix are the primary ground forces of the Grox Imperial Fleet. Originally used to purge planets of life, this role has since been taken over by the Staff of Death, so now Conqrix are typically used to crew Grox ships, defend Grox bases and perform various special missions.

The Conqrix were originally non-sapient creatures that were upgraded (much like the Grox) with cybernetics an incorporated into an artificial group mind along with the rest of the Grox Empire.

There are several types of Conqrix, in three categories:

Grox Drones are individual Grox, armed with a beam rifle and protected by regenerative ablative armour and regenerative deflector shielding. They are no longer used outside of Grox cities - instead, they've been replaced by Conqrix - since several losses were incurred in the early New Grox Wars due to superior ground forces easily being able to slaughter the relatively weak Grox Drones.

The Grox use three vehicles to collect spice and defend their colonies:

The vehicles are all very strong and highly adaptable - for example, the Oceanic Grox can hover above ice and even swim through lava. Their weapons are not as powerful as those found on spaceships, but they have a far greater range than those of the Conqrix (around 300km in the case of missiles).

Retrieved from "https://spore.fandom.com/wiki/Fiction:Grox_Empire/Imperial_Fleet?oldid=744857"
Community content is available under CC-BY-SA unless otherwise noted.