Battle For The Milky Way

DCP invasion of the Draconid Imperium

When the Delpha Coalition of Planets decided to take action on the members of the Xonexi Allies in the Milky Way, one obstacle was apparent to their plans for securing the Milky Way: The Draconid Imperium. Before they attacked the Katar Sector, the DCP along with the Kindred Coalition planned to occupy the closest territory to the sector - dubbed Tholfame-22 by the Imperium - It was a risky move given their rival's powerbase. But for one of the last of the Goa'uld, there was an opportunity he could barely resist...

Falling back to the edge of Draconid space in the northern rim of the galaxy, forces of the Talon Aetheral Corps - reinforced by forces dispatched from Andromeda - drew up a fortified line to counter the advancing DCP fleets. 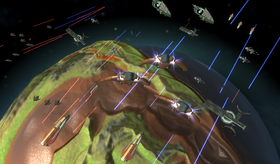 The Coalition assault under System Lord Ambisagrus faced severe resistance over the planets of the Anadrosi system. Battlefleets under the personal command of Commodore Tarvalon Seranius, who opened the defence with a barrage of hyperspatial missiles and gravity-assisted cannon volleys that impacted the larger DCP vessels. Understanding that the DCP vessels relied on their immense firepower, the Solinkidor Admiral Entala Sin-Shorr ordered for the larger ships to stay in the shadow of adjacent planets and moons in order to project their munitions along nonlinear trajectories though hyperspace while smaller frigates and strike cruisers drew the fire of the DCP ships. Surface-to-orbit batteries assisted the defending Talon forces in weakening DCP fleets.

After several hours of fighting both within Anadrosi and the neighbouring systems, the tide turned as a volley crippled Ambigasrus' flagship. Seeing the value of the System Lord, Draconid forces dispatched marine teams to it as well as other important vessels. Although crippled, the crews of the damaged vessels put up a valiant resistance against members of the Talon Marine corps, but ultimately failing to protect the command crews as marines ultimately captured Ambigasrus on his command bridge, who surrendered with little resistance.

Ambigasrus, along with several hundred DCP and Kindred Coalition officers and crewmen were taken to internment camps established within Tholfame-22's outer systems.

Since his capture, the System Lord Ambigasrus has been kept confined to a prison cell deeper into the Tholfame-22 sector. Because of his status as one of the Kindred Coalition's commanders, the Draconid Imperium had given him preferential treatment: His cell was heated, he had been given a comfortable bed, a healthy diet and plenty of reading material to keep his mind occupied. For him however, that was offset by the fact that he had been stripped of his armour, his kara'kesh and was forced to wear a navy blue boiler suit. It was not all bad, as the outfit had a few decorative motifs to it, possibly so he could be distinguished from more rank-and-file prisoners of war and marking him as a commander of the enemy faction.

He had been brought into an interrogation room within a building next to the internment camp. He had been given a simple chair in front of a marble-topped table. To his left was a large mirror. In though a door in front of him came Aedan Eleron Sarenemor dressed in an officer's dress uniform. He took a look at Ambigasrus and appeared to display disappointment as he moved to sit in the chair opposite the System Lord.. The only other people who were with him in this room were two reptillian soldiers whose armour denoted them as members of the Draconid Imperium's Talon Marine Corps.

The Aedan set his eyes on the last System Lord, and as he sat down in his seat. the Aedan spoke in a rather cutting tone, clearly not happy that he would have to spend this time with a System Lord."This is an interesting situation. I never expected to set eyes upon a System Lord after their extinction"

Ambigasrus gave a wink, as if it was to say he knew more than the Aedan did about the status oh his species, whether or not it was true. "Yet here you are" Eleron continued "Confined as a prisoner, as I imagine a number of your kind have experienced."
Ambigasrus smiled, "In actual fact, former captives were nearly all executed."
"There may be hope for you" Eleron continued "if you cooperate" Ambigasrus continued; "Humans, they replaceone form of tyranny with another."
"Is that a bad thing?" Eleron asked in response. "Granted, their history is turbulent, but they have become something much more than they could have under your kind"
"My kind gives them faith and certainty. Something they crave but cannot fathom."
Eleron gave a disdainful look to this reply. "Yes, the image you tried to impress upon the galaxy is is quite well-known about." He then began to write something down "But, sadly I suppose, those days are over." Eleron continued to push his point. "Like it or not, humanity has slipped through your grip long ago"


Ambigasrus attempted his best to hide his irritation, knowing Eleron was trying very hard to provoke a response from him. He took deep breaths, and kept silent.

"That is of course, if it were possible to completely eradicate an idea. When you didn't come as gods you impressed yourselves as demons and nightmares."
"So, what do you have in store for an old bad dream like me?" Ambigasrus replied, a little sarcastic. "I have not been put to death, I assume humanity has already blunted its axe after centuries without us... Unless we have something you want."

Eleron sat forward in his seat and smirked. "I know you do not desire death, it is common, especially among beings who find themselves endangered." A sly look then emerged in his eye "But as I am sure you have wowrked out, freedom has it's price."
"Oh, too kind and soft to extinct a race?" replied mickingly, feigning disappointment. "The humans might be, but you Draconis. I know what your kind is capable of. And I think we both know the masterminds behind these Xonexi allies."

Eleron sat back in his chair. "It was the French Empire that came forward with the proposal...but I see what you mean. Thus. I can grant you asylum, perhaps a planet for you to rule over of your own volition. A gift, if you do something for us"
"I cannot resist" Ambigasrus replied, Eleron could see the greed in his eyes; to a System Lord, any power was like gold on a stick. He knew this well. He tapped a panel on a communicator resting on his ear, all the while keeping eye contact with Ambigasrus "What comes next is to be off the record. Turn off surveillance, leave only a token protector"

One of the guards nodded and stood at ease. They walked to the door and gave once last look to the two of them before quietly closing the door behind herself. Once that guard was gone, Eleron leaned in.

"I ask that you become an informant for us." he asked "The Allies require every advantage we can find. What better than a System Lord? Provide us with the Coalition's movements, numbers, whatever you can. When this war ends, You wil lgain power once more."
Ambigasrus knew the risks but the reward was too enticing "The DCP would be quick to get rid of me once their campaign is over. Its a deal, Aedan. You are the ticket."

Kowwing the System Lord was in his palm, Eleron leaned forward with a cunning smile and held out his hand "Only you and I will know."

Suddenly, it was a blur. Eleron felt a slight pain, followed by severe disorientation. There was no struggle, his guard wasn't even aware. Ambigasrus smiled to himself. Humanity had outgrown his race, but now he had a new one to think about. His guard turned around, a little warry of what just happened. "Are you all right, Aedan Sarenemor?" they asked, which took him by some measure of surprise.

"Yes, I have had a little too much to drink." Eleron replied "It was a surprise party. Tell no-one of it." The guard could smell it on his breath, and assumed no more. Draconis were known for their fondness for drink, and had a reputation of creating some of the gigaquadrant's stronger blends. So it was easy to assume that the Draconid aedan, out of peer pressure or stress, had drank more than what he thought would keep him sober.

"Then I will return Lord Ambigasrus to his confinement" the guard replied. They wlaked over to Ambigasrus, who looked a little dazed and picked him up by the arm, taking him though a door back into the containment cells that he had been staying in these past few days. Eleron watched, and for a moment, smiled ever-so-slightly.