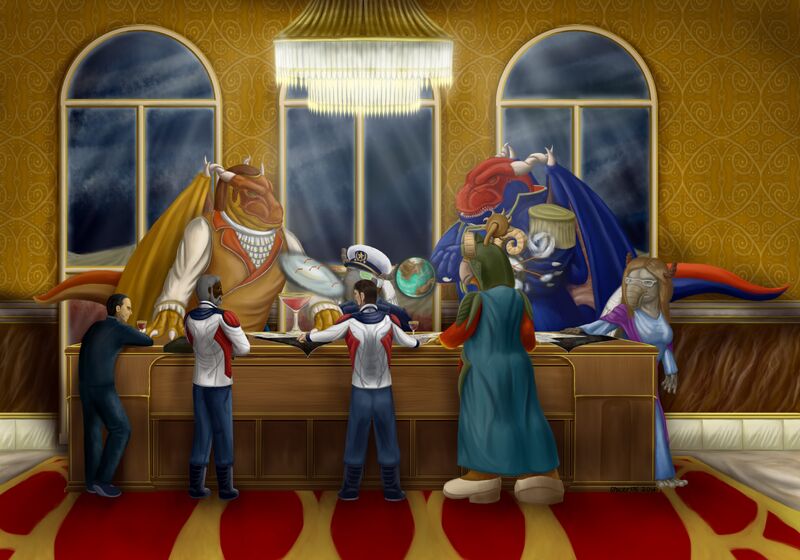 Representatives from the Draconid Imperium, France, and the Tybusen Intergalactic Allied Federation discuss the details of the Alcanti Triad Treaty.

ANIMATED by a desire to meet the necessities of a defensive war, provoked by an attack of Delpha Coalition of Planets (DCP) against either of them,


RECOGNIZING the instability of the Gigaquadrant and the need for cooperation against outside threats,


CONDEMNING the recent acts and policy of the DCP as ambitious, imperialistic, and blatant abuses of power,


The Draconid Imperium, the French Republic and its colonies, and the Tybusen Intergalactic Allied Federation (TIAF) have agreed to uphold the provisions of this treaty.

1. The Draconid Imperium, France, and the TIAF recognize the Delpha Coalition of Planets as a threat to the security of their respective populations and the stability of the Gigaquadrant as a whole. While well intentioned, the methods of the DCP are indistinguishable from that of an aggressor and should be answered as such.

1.1. Furthermore, the Draconid Imperium, France, and the TIAF recognize the allies of the Delpha Coalition of Planets as potential enemies. These nations, belonging to a greater geopolitical entity known as the Seven Starr Alliance, are:
1.2. Given the diplomatic positions of these nations, it is unclear whether they would adhere to their alliances with the DCP in the event of war. While they are potential enemies, some might also be potential allies.

2. Consequently, the Draconid Imperium, France, and the TIAF shall henceforth participate in a binding military alliance which shall be referred to as "The Triad" for the purposes of this treaty. The conditions of this alliance are enumerated below.

2.1. If any of the Triad or its allies are attacked by the Delpha Coalition of Planets or its allies, the Triad will mobilize as one with all of its available forces, alliances, and resources to attack the DCP in accordance with ARTICLE III of this document.
2.2. Until the dissipation of hostilities, the Triad agree to share and research technologies which will offset the technological advantage of the DCP in accordance with ARTICLE IV of this document.
2.3. Similarly, the Triad agree to share any intelligence regarding the disposition, extent, and technological advancement of the DCP and its allies which is already in their possession or shall come into their possession.
2.4. The Triad recognize their unshared allies within GITO, the Andromedan Galactic Commonwealth, and Orion League as potential mutual allies.

3. In accordance with Provision 2.1 of this treaty, war will be declared unanimously and with the assent of all three members of the Triad.

3.1. Immediately upon declaring war, Draconis, French, and TIAF forces will form a unified chain of command headed by the Lord-Admiral of the Imperial Talon Navy as Commander-in-chief.

3.2. Immediately upon declaring war, the Triad will call upon their allies in order to create a substantial anti-DCP coalition.

3.3. Once the war is underway, the Triad commit to pushing their industries to maximum and to provide surplus in support of their allies.
3.4. During the war, the Triad agree to allow open passage through national-owned territory, wormholes, and hyperlanes to allied forces.
3.5. The Triad recognize the following symbols as representative of their alliance, to be painted on direct combat assets for easy recognition:

3.5.1. On starships and other aerospace craft, the colors silver and dark blue; a roundel with three concentric rings, painted blue-white-blue.
3.5.2. On ground vehicles, appropriate camouflage is to be used;
3.5.3. On all craft, vehicles, and pieces of equipment, a three-pointed star encased in a broken circle.

5. The contents of this treaty shall be kept absolutely secret.

Paragvatus of the Draconid Imperium,

Prime Minister of the French Republic,

Federation Ambassador to the Draconid Imperium,

In the presence of

Lord-Admiral of the Imperial Talon Navy,

Commander of the TIAF Assault Armada,

“Have we preserved peace, or made war inevitable?”

“I wonder how future generations will look upon this document. Will they see it with the same idealism as the Cyrannians have, as a relic of a more barbaric age––a rusted nuclear weapon sitting in a museum which could at a time have destroyed the world? Or will they understand why it was necessary, having known its terrible power and the evils it was meant to prevent?”

Retrieved from "https://spore.fandom.com/wiki/Fiction:Great_Xonexian_Schism/Alcanti_Triad?oldid=732083"
Community content is available under CC-BY-SA unless otherwise noted.