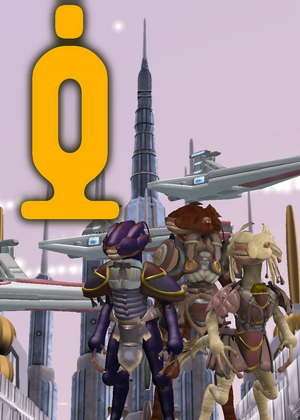 President Apollo sat on a stool placed on the stage outside the executive office of the United Republic of Cyrannus. It was a frosty morning with small droplets of snow falling to the endless city below. Apollo rubbed his hands together and tapped on the voice amplifier in his hands to ensure that it was in working order. As he looked out into the crowd below, he smiled. Clearly their good spirits kept them warm. From behind him, Athan Apostila approached and whispered into the President's ear.

Apollo sighed deeply before he stood up and patted Athan on the back.

Athan smiled weakly and began to walk toward the Executive Building. Apollo fastened his scarf around his neck and walked toward the podium facing the crowd. Just before he arrived, his wife Gianne placed a kiss on his cheek and began to prim her husband's suit. Apollo smiled and took Gianne's hands into his own.

Apollo winked at his wife as she walked toward Laoi and Kara who sat behind the podium. Clearly completely bored. Suppressing a laugh, Apollo turned toward the podium and waved toward the crowd, who applauded enthusiastically. Apollo could see just about any species he could think of, Libertus, Adelphi, Alavar, Rambo Serindia and even the odd Basileus. Apollo held the voice amplifier to his snout and began to speak.

Once again, the crowd applauded. His tone notably lighter, he continued.

From the stage on which Laoi, Kara and Gianne sat a tall vaguely purple being. The new President walked toward the podium, waving at the crowd as he walked. Gianne had a noticeably annoyed expression on her face, but Apollo hid his quite well as he shook the new President's hand. As Apollo sat beside Gianne, the President addressed the crowd.

Half an hour later, Guolivian had finished his speech and Apollo and his family boarded a shuttle leading to Capricaerón where Apollo hoped to live out his days in peace with his young family. The war was over, the galaxy was at peace and the future was bright. All was well.