Fighting the Grox, leaving relics across the galaxy

Durning the time that the Federation was founded, the Grox had control over the entire Galactic Centre and even had strongholds in the bases of the two Galactic Arms. This meant that exploration ships from the empires that would later make up the Federation had to quickly skirt around the edge of Grox Space to reach the opposite arm, where (if they survived) they had to form alliances with local empires who would give them somewhere to stay. After the missions of these few lucky ships were complete, communication between the arms was carried out via trade ships with twosystem drives that could travel between star systems in different arms without having to fly through the Galactic Centre.

Eventually, several dozen trade routes were formed that allowed for a constant flow of both messages and people between the different empires, and the Second Galactic Federation was soon formed. Different ship designs were created by engineers and military scientists throughout the galaxy at the capital of the Belatra Kingdom, Telan, and when they were produced the Federation had its own singular space force - the Grand Galactic Fleet was formed. The designs were passed on to the capitals of major empires in the neighboring two arms, who then produced their own ships according to the standardised designs.

The Grand Fleet explored the other two arms of the galaxy, and defended Federation worlds from hostile empires - often by bombing them into surrender and then bringing a more peaceful government into power which would then choose to join the Federation. However, this peace did not last forever.

Launch of attacks by Grox Probes on several Federation worlds

(destruction of the Atelania; Grox victory)

“We are the Grox. Lower your shields and surrender your ships. We will add your technological distinctiveness to our own. You will be exterminated. Resistance is futile.”

The Grox had been mostly ignored and viewed only as a threat for the few pioneering exploration ships, with a series of raids against the Zuckhs and Tsajaginykar having been easily fended off when the Grand Galactic Fleet was called in to defend them. Then, in 3800 BC, they suddenly started attacking the Federation with greater strength than had previously been seen. Grox Probes arrived over some of the closest Federation worlds to the Galactic Centre and their fleets of assault ships destroyed the barely-defended colonies.

In retaliation, the Federation launched an offensive on two major fronts - each front being one of the Galactic Arms. This assault, the Outer Colonies Campain, was extremely successful. The Grand Galactic Fleet scored hundreds of victories and over 4000 systems were wiped clean of the Grox, leaving less than one-twentieth of their original empire remaining.

However, the Grox had a secret weapon - the Conqrix. Along with invading battleships, the Grox Probes carried Conqrix Infection Pods, which quickly buried themselves into the ground of targeted planets. The Conqrix Pods employed shielding techniques that made them difficult to destroy from the air with anything less than by dropping antimatter bombs near them or by simply carpet bombing the area. The former required incredibly expensive weaponry that was currently being used against Grox colonies, and the latter was difficult while the Grox ships were flying around and defending the Conqrix.

The Federation had only one choice: the formation of a Grand Galactic Army to conduct ground-based missions against Conqrix troops while the Grand Galactic Fleet fought the Grox in the sky. The Grand Fleet's ships were withdrawn from Grox Space and sent to defend against the March of the Conqrix.

The Federation's efforts were in vain. The Conqrix were successful in weakening the alliance's industrial infrastructure, and soon the Federation collapsed. The member races of the Federation were eradicated all of the way to the tips of the Galactic Arms (with a few small hidden remnants surviving) and galactic society was utterly destroyed. The Grox were now lone amongst spacefaring races in their galaxy, but they were crippled by the Outer Colonies Campaign and returned to the safety of Grox Space in order to rebuild their empire. 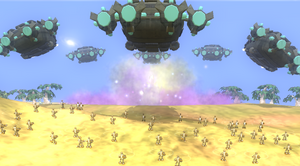 Cyberion troops deployed in the First Battle of Ummale, the first major ground battle against the Conqrix. 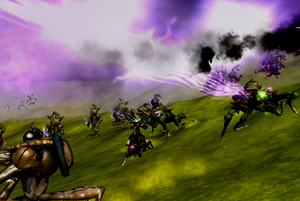 The Battle of Eskes, the last major engagement of the Second Grox War. The ground battle was a victory for the Federation, but the Grox ultimately won with air superiority.
Add a photo to this gallery

Although the Federation was no more, many of the Grand Fleet's ships remained as wrecks and derelicts across many planets of the galaxy. During the First Phase of the Girdo Galactic War, many new spacefaring civilisations discovered the remains of these ships and incorporated the technologies (and even the designs) into their own space forces. The Fleet's flagship, the Atelania, was not located until as late as the Post-Grox Crisis, after which the Girdo Empire battled opposing forces to try to find whatever technological secrets may have laid within its corpse. None were found, but more information about the Second Galactic Federation was retrieved from what remained of its data storage facilities after 6500 years. Finally, the rest of the Grand Galactic Fleet's ships, along with surviving Cyberion soldiers in stasis, were discovered by the Empire during its Intergalactic Era and incorporated into the Imperial group mind.

The Second Galactic Federation presumably had dozens if not hundreds of member races, but records of only a few of them still exist. Some species from earlier times that are known to have survived until and beyond the time of the Second Girdo Grox War, most notably the "Quadrupeds", may also have joined of the Federation. Of the known species of the Girdo Galaxy, the Belatra, Cyberion, Madrosor and Eskesians were significant members of the Federation.

Eight ship classes - five capital ships and three starfighters - are known to have been used by the main Grand Galactic Fleet.

There were three types of ship weapons:

Most sublight propulsion systems were divided into two types:

Finally, a ship's crew were roughly divided into four types:

Retrieved from "https://spore.fandom.com/wiki/Fiction:Grand_Galactic_Fleet?oldid=755340"
Community content is available under CC-BY-SA unless otherwise noted.