“They call me Gorf. Gorf does what a Gorf does, and that is a lot.”

Gorf is a curious Dream Energy creature born after the death of Laminoula'Fuerq who serves as a supernatural companion of the famed Apollo after taking a liking for him. A creature who seemingly makes little sense, he serves as a protector and an amusement for the Libertus' family and friends.

Gorf was created following the destruction of Laminoula'Fuerq during the Second War of Black Fog. The god-like being's essence was shattered by his death, with one of these shards falling into the Cyrannus Galaxy and growing sentience, becoming Gorf. Following its birth, it began exploring the galaxy in search for a companion. Gorf eventually had an encounter with Apollo of the United Republic of Cyrannus, and wanting to play with him, he teleported Apollo to several places, from the United Republic of Cyrannus to wilds planets, to the Confederacy of Allied Systems and to the Rambo Nation. After being teleported to Empress Ramashe's palace, Gorf and Apollo ended up seeing a Xhodocto, before Apollo was teleported back to his home, with the creature disappearing from sight.

After not being seen for months, Gorf reappeared to Apollo during the Dark Times, where he secretly sneaked into the Republic Remnant's flagship, the Last Hope. Gorf quickly became friends with Laoi Cretacea and Kara Inviá, Apollo's children, as well as their pet Dvottie.

During the Antiquity Pursual Campaign, Gorf appeared to Rela Loupál and stole the shard of Dream Energy she was about to recover from the ruins of a Vida'Rra planet, causing him to grow into a more mature form and become considerably more . Following the death of Gianne Inviá, Apollo was relocated to Empress Ramashe's palace along with Apollo's children. For the following months, he would alternate between spending time with Apollo at Mou'Cyran and with Laoi and Kara, being somewhat of an omnipresent presence in their family.

During one of Laoi and Kara's travels, Gorf snuck into their spaceship in order to stay by their side, and the trio would encounter the Cogsangui named Thaur Vicliquam floating through the void in stasis. The dreamy entity prevented the warrior from attacking the two young Libertus by knocking him out, and afterwards, they would calm him down and eventually bring him to Mou'Cyran with them. This meeting would eventually lead to the creation of the Unified Order of Cognalorilos, much to Gorf's ignorance. Later on, he would take both Apollo and the scientist named Dané Elenya into an unexpected adventure across space, barely escaping the likes of Zillum and Tyrómairon himself along the way. With the outbreak of the Second Great Cyrannus War, Gorf has become quite restless over the safety of Laoi Cretacea and Kara Inviá, being particularly bothered by the idea of them being in danger.

Gorf would become vital for the defeat of Mar-Júun by helping the Aldárae Order retrieve the Spear of Ramielum, and later saved the existence of the New Republic Remnant; when Apollo and his last officers were cornered by Zillum, Gorf attacked the Mortalitas and ultimately sacrificed himself to both incapacitate him and send the Republic to safety with his essence.

This was not the end of the creature, however; following the end of the Great Battle of Orbispira, Gorf was brought back to life by Chaneonix as a 'gift' to Apollo for his contribution in the defeat of the Empire. The mischievous blue creature remains by the side of Apollo and his family to this day.

Gorf takes the appearance of a blue furred creature who, at a distance, could be confused to a Grox. Despite being sapient, he never wears any kind of clothing, though it does not take long to notice he has nothing to hide. Since joining Apollo's family, Gorf has bony spikes across his spine, hole on his cranium and claws on his fingers, serving as his own equivalent of a metamorphosis. It is believed exposure to Dream Energy allows Gorf to grow into more mature states.

Gorf is described as having a perpetual air of indifference for the opinions of the individuals around him, doing whatever he pleases and when he pleases and rarely asking for permission, often speaking in broken or childish sentences which could be considered non-sequiturs at best. He has developed a deep connection to Apollo, much like a supernatural familiar, and he currently spends the entirely of his life around him and his family, acting as a mix between a pet and a jester. Gorf has also taken a liking for the family Dvottie Tigarlu, apparently being able to communicate with it as if it was a person like him. So far, no one has come to find out what exactly Gorf is meant to be, including Gorf himself, who seems ignorant of his Dreamy heritage.

In the event his friends are threatened, Gorf will come to their rescue by using his dream energy powers. He has been seen teleporting millions of light years in seconds, and can release blasts of essence from his mouth as an offensive tactic. Gorf seems to be far more agile than his lazy behaviour may indicate, been seeing dodging gunfire from Imperial agents with perfect precision. While he has never been seen wounded, it can be assumed he has the same regenerative powers of all dream energy beings, which would allow him to shrug off most minor blows.

Descending from Laminoula'Fuerq, and Rhigeo Fuerq by extension, Gorf has within him traces of the billions of Vida'Rra souls used in the latter's creation. It is known that among them was the Vida'Rra scientist named Ramielum, who was the developer of the Spear of Ramielum which held the power of permanently destroying Shu'wokerama's Vanguards. Gorf is vaguely aware that he is "made of many peoples", but he is not aware of the details of his own nature.

“Yes, you're our friend. I hope you help the children adapt to their new life.”

“A miraculous, but huggable creature” 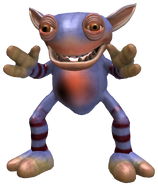