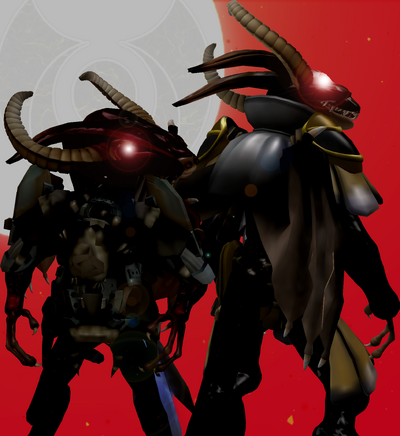 “Slowly, the golden gears turn and the machinations of hope and faith begin to set into motion. There shall be a new dawn indeed, but not one that belongs to the Highlords or their conjoint organization. No, instead it shall be the people who lead themselves into the golden age!”

The Andromeda War had ended, preserving the lives of quintillions of species and individuals all across the galactic plain. To retain this sense of security and peace, the Andromedan Galactic Commonwealth arose from the three single greatest powers of Andromeda itself; the Draconid Imperium, the Divinarium, the Brood of War. However, they persist to try and control their future, to lead the Andromedan people under their mighty claws and fists. Little do they know the future does not belong to them, the future has no place within the hands of warlords and zealots. The future belongs to that of the Andromedan people themselves, it is their choices and not those of the Highlords that shall lead the galaxy to prosperity and peace. This is the teaching of Crispy, the leader of Crispy's Insurrection.

The greatest enemies do not reside within the shadows of the cosmos, but within the comfort of one's own empire. To believe otherwise would be foolish and arrogant, but then again, why else would one's own people rise up against them if they did not possess such traits? The threads between friend and foe are now trodden carefully, for a single slip could shatter the glass that was built to protect, transforming into shards designed to harm.

The Dawn of Gold[]