The Nightmarish Dalek
“THIS UNIVERSE WILL BE COR-RUP-TED.”

Genesis of Nightmares, otherwise known as the Corrupted Dalek Incident is the name given to the Corruptus attack on Apalos and its subsequent consequences led by the entity known as the Nightmarish Dalek. An unlikely combination of extremely advanced technology and extremely powerful essence, he would prove to be one of the most dangerous nightmare demons the First Gigaquadrant had ever faced, and only through the combined effort of numerous factions and powerful individuals would it be saved from the potential rise of a demonified Dalek Empire.

To read the incomplete, roleplayed dialog of the story, see this page.

Gaining knowledge of the power employed by the old Dalek Empire, the Corruptus God Shu'wokerama corrupted one of their strategists, who was abandoned in a desolate world in a vegetative state. This demonified individual, who would become known as the Nightmarish Dalek, was then tasked by its demonic master to spread destruction across the Gigaquadrant by unifying its race under it, which it would begin doing by launching an assault on Apalos in order to find the location of his Dalek kin and a Genesis Ark.

Realizing the threat posed by a Dalek under the control of the Corruptus, Apalos created a small team of battle-hardened individuals with experience in fighting both the nightmarish power of the Corruptus and the overwhelming technology of the Dalek Empire: Titanozor, Ryen and Hachiman. Simultaneously, the Nightmarish Dalek begun corrupting more of its kind, brainwashing them into servitude and turning them into loyal followers of the Corruptus. Disguising themselves as prisoners, the team went after the Nightmarish Dalek and encountered him as he attempted to persuade more of its kind into following him; the demonic being proved itself almost impervious to their efforts to harm it, but their combined power and that of the non-corrupted Daleks forced him to retreat, with these rescued Daleks pledging to bring the Nightmarish Dalek down no matter the cost.

The allied Daleks revealed the Nightmarish Dalek and its minions were seeking a Genesis Ark, a prison containing an entire army of Daleks in suspended animation, and in order to access it, it would require the aid of a being able to manipulate time; a member of the race of First Ones known as the Time Lords was the first thing to come to its mind, and the immediate goal of the Corruptus was to find and enslave one of them to their bidding. At this time, Apalos and its group were approached by the famed Ioketa shaman Tuolog, who had foreseen the consequences of allowing the Nightmarish Dalek to succeed in its plan and sought to find the Time Lords himself, so that he could keep them safe from the Nightmarish Dalek's reach.

As the Corruptus returned to the location of the Genesis Ark, Apalos and its team gave chase. They would be confronted by a fleet of corrupted Daleks, all brainwashed into serving the Nightmare, and would have been exterminated had not for the arrival of the allied Dalek's own fleet, who managed to bring their fallen brethren down: considering the Nightmarish Dalek an offense to their race, they had united as many of their own as they could to stop him from corrupting the Genesis Ark. Apalos and their allies eventually found said Ark, hidden away within an ancient First One space station lost to time, where the Nightmarish Dalek began extracting Tuolog's essence from his body in order to open the Ark once and for all.

As armies of Daleks fought their own fallen kin and their demonic masters, Titanozor, Ryen and Hachiman confronted the Nightmarish Dalek one last time. The servant of Shu'wokerama laughed at their insistence, claiming the Ark was already on a timer to open, and that they would all witness the birth of a new Dalek Empire, forged by demon flame and made only to serve the whim of Shu'wokerama. A mighty battle ensued as the group used all of their skill, all of their power to face off against the Nightmarish Dalek and his nearly invincible form, though much to their surprise, they found they were not alone in this struggle; the Nightmarish Dalek was subject to being slowed down in time, courtesy of the Time Lords who, from a distance, lent their own aid in the battle against the insidious creature, allowing the group to tear holes through its travel machine until it was rendered no longer functional. 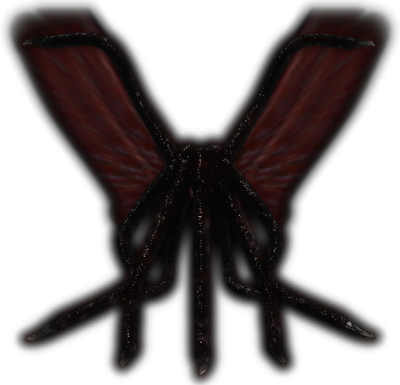 Overcome with rage, the Nightmarish Dalek's true form emerged into their view as it burst out of its travel machine, growing in size at a frightening rate as it achieved a Null State; what was once a shambling mass of tendrils became a formless behemoth, with a pair of wings resembling that of a ghastly moth made out of searing demonic flame, from which meteors of entropic essence rained down and obliterated everything beneath them. This mass of pure evil floated over the Dalek and Apalos forces, devastating all within its sight in a blind frenzy, though it had revealed its true weakpoint - its Corruptus Heart - upon leaving its travel machine. With Titanozor's God Hammer, Ryen's power over the Light, Hachiman's Dream Energy and Tuolog's Chronoscopic powers, the Nightmarish Dalek was blasted out of the air, letting out one final, blood-curling shriek as its form turned into dust, bringing an end to its threat once and for all.

Upon the destruction of the Nightmarish Dalek, the Corruptus Demons infesting the station fled, leaving only the Daleks to fight and kill one another. The Ark, about to be opened, could no longer be closed; faced with this fact, Apalos and Tuolog instead chose to destroy it, killing all the Daleks held within it. This, in turn, infuriated the "allied" Daleks - who sought to free their kin for their own reasons - though they could do little as both their maddened brethren and Apalos began killing them. By the end of the mission, every Dalek in the station had been killed, corrupted or otherwise.

The team, successful in their task, went on their separate ways as Apalos both took control of the First One station and made efforts to restrict knowledge of the incident to anyone not involved: the less the Gigaquadrant knew that it had barely evaded a cataclysmic war against a demonified Dalek Empire, the better.