No concept of commerce

~1,200,000 years old
“I know not of where they came from, but what I know is that they have plagued my people for too long. Their spores and fungi devour the minds of men and women alike, regardless of race, turning them into little more than zombies. And once they invade your nerve system, the only cure is death. The plants fiends must die, or my galaxy will never have peace.”

Ganthorea was the name given to the hordes of alien plants native of the Karstul Sector of the Borealis Galaxy. One of the modern galaxy's most mysterious factions and also among the most hostile, the Ganthorea were in an eternal, unrelenting chase of what they referred to as absolute eternity, consuming worlds and turning their populations into mind-controlled thralls in the process through the use of their parasitic spores and mosses.

Sporting Alvino ancestry in their genetic structures, the Ganthorea was made up of many kinds of bloodthirsty plant aliens who were highly adaptable for near any situation. Their great age and absorbing of various worlds belonging to advanced factions had granted them advanced technology themselves, making them on par with the modern Polar Crystal Alliance if not more powerful. Nothing could stand before the Ganthorea on its quest for absolute eternity, and it would make any who attempted to go against them bow before the presence of the Princess, the Queen and the Doctor who began it all a million years in the past.

The Ganthorea was created roughly a million and two hundred thousand years ago by a scientist named Brekiel Ganthor, an individual of a now long extinct species who inhabited the Karstul Sector of the Borealis Galaxy. His former race was caught in a conflict with the dreaded and ancient Alvino Brood and found themselves slowly devoured and destroyed by them. Brekiel would begin studying the Alvino through series of biological samples his empire managed to recover from successfully repelled invasions, and the doctor would come to be fascinated by their unique biology. However, at one point, he was mysteriously driven insane during his research, and to this day the few aware of his existence wonder what happened, with a favored theory being that Regnatus' whispers reached his mind through the samples he had collected. What is known for certain is that, through series of experiments, Brekiel turned himself into a half-plant abomination, merging his genetic code with that of the Alvino in order to become an hybrid of great power, and he proceeded to do the same to the rest of his people, mutating them into hordes of servants who were unable to stop him.

The Alvino themselves found their forces victimized by Brekiel's powers, with thousands of Alvino drones being absorbed into his twisted brood until the Alvino decided to retreat and no longer return to the sector. Using the technology the Alvino had left behind, Brekiel's servants began expanding through the stars until they became one of the galaxy's greatest powers at their time, rivalled only by the Rovegar Matriarchy and the Kondrakar Dominion, who would become the plant mutants' main rivals. Thousands of years of war between the three factions led to all of them being weakened, including Brekiel's servants who retreated back to their home territories, though the Rovegar still found themselves under constant attack by them, some which led to the assimilation of some of their Matriarchs who would be turned into Queens of the plant brood. The Rovegar would come to name Brekiel's servants Ganthorea after their incessant chanting of said name.

Lurking in the shadows of the Polar Crystal Alliance during the Ice Age, the Ganthorea hoped to eventually attack and consume them, getting revenge on their Rovegar enemies in the process. However, due to the schemes of Vileraz IV, the Alliance - with the aid of numerous extragalactic allies - launched the first strike, hoping to exterminate the Ganthorea before they could be a threat. What followed was a war lasting for a full year, where the Alliance and its collaborators clashed with the living fleets of the hive mind while the Penumbra Unit hunted down their leaders. Upon the death of Brekiel Ganthor, the Ganthorea lost their sapience and were reduced to frenzied animals, free to be exterminated by the Alliance - however, their remnants were instead annihilated by the Kondrakar as they re-emerged from the shadows of the Eastern Arm, with many of their former worlds being reduced to ash by the nightmares of the Corruptus.

The Ganthorea was a hive mind, with all aliens serving under the empire were linked together by a powerful psychic power, having no individual thought or personalities. The only exceptions to the ruler was the Doctor, the creator and supreme master of the Ganthorea and the Monarchs, a pair of specialized drones created out of Rovegar matriarchs to serve as the Doctor's advisors and lieutenants. The hive mind governed all, meaning there were no individual governors and rulers for planets or sector, with things such as ranks being non-existent. The leaders of the Ganthorea were:

The Ganthorea, as a hive mind, had no such things as political leaders. Drones were separated into worker, warrior, protector and support castes, all which did their tasks in maintaining the empire. Workers drones were responsible for building colonies, maintaining them and creating equipment to be used by both themselves and the other castes, while warriors were drones crated for the purpose of attacking and consuming other worlds, generally outfitted with the empire's most advanced weaponry to do so. Protector drones specifically remained on Ganthorea worlds in order to act as a defense line for their cities and the comparably harmless workers, and support drones were a caste responsible with maintaining the well-being of all the others by offering medical treatment to injured drones, sentries and scouts for warriors and additional support to defenders lest they be defeated in battle.

Aliens absorbed into the hive mind of the Ganthorea were not seen differently from any other caste and were assigned to one of the four as soon as their minds were completely taken over. Having no individuality, the Ganthorea showed no religious allegiance whatsoever, even for their doctor creator who was merely seen as the greater drone of the hive. Ganthor Drones who were somehow separated from the hive mind revert into animalistic states and, if not assimilated back to the brood, eventually died out altogether as their nerves slowly withered and ruptured.

The technology of the Ganthorea was a combination of old Alvino Brood technology, which by itself descended from that of the Kormacvar, and technology looted from both the Rovegar Matriarchy and the Kondrakar Dominion, making the mutated plants one of the galaxy's most advanced modern natives. Their ships were usually of great size and bulk, made to accommodate great hordes of drones and were outfitted with powerful shields, turbo lasers and antimatter explosives. However, most spaceships in the Ganthorea's arsenal were actually suicidal cargo vessels built with the main intention of transporting ground forces through rapid deploys or by downright ramming into other spaceships in order to invade their interiors.

Ground forces of the Ganthorea were outfitted with weapons of Rovegar descent, with the plants often seen wielding large vibroweapons akin to the Matriarchy's famed Witch Gauntlets. Ranged forces attacked by wielding either coilguns or artillery fire akin to those of the Kondrakar, their weapons all loaded with the spores and mosses which would dominate the minds of the enemy and turn into into zombies loyal to the absolute eternity. The process of mind-control took place when Ganthorea spores entered the bodies of the victim, where they proceeded to travel to the center of their neural system and rooted themselves there, eventually growing into seeds which served as catalysts of the Ganthorea hive mind. 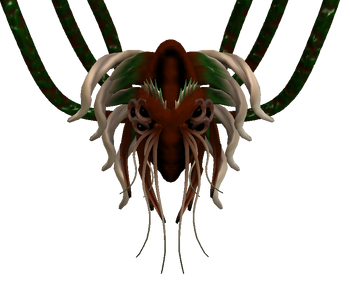 Doctor Brekiel Ganthor was the creator of the Ganthorea, the alien scientist of now forgotten race who turned insane upon studying the Alvino Brood's biological traits. Indoctrinated by Regnatus after being exposed to Alvino spores and one of his hundreds of thousands of backups, Brekiel turned himself into a titanic plant of immense power, able to create a hive mind which extended through the stars of Borealis and hungered for the flesh of those not yet absorbed into it. Brekiel's goals were to completely assimilate the galaxy into his hive, having long been warped into serving his own agenda rather than following what Regnatus wished. 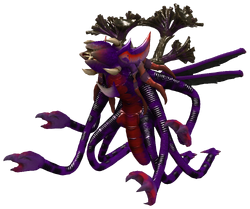 The drone known as Queen-caste Ganthar was a former Rovegar Matriarch who was absorbed into the Ganthorea, turned into a personal servant and "bride" of Doctor Brekiel. It was her assimilation into the mutant plants' hive which led to the eternal war between the Rovegar and the Ganthorea, though in the modern era, only the Matriarchy's most high ranked members remembered Queen Ganthar's existence and relevance. Sporting incredible psychic powers, the Queen was a figure who stood behind the scenes at all times, leaving the Ganthorea's public affairs to her surrogate daughter. 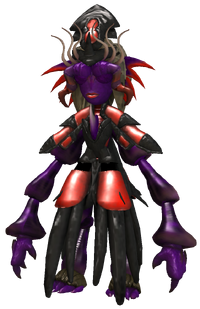 The drone known as Princess-caste Ganthar was the only publicly known of the Ganthorea's leaders and likewise served as the plant empire's main face in intergalactic affairs. Power-hungry and naturally sadistic, the Princess had been the nemesis of numerous Rovegar Matriarchs through the ages, having come to cause the death of many of them during history. Manipulative and malevolent, the Princess was among the galaxy's most dangerous individuals and her defeat remained as one of the Polar Crystal Alliance's topmost priorities during the War of the Ancient Three.

“The Matriarchy has warned us of the Ganthorea, and indeed, we have detected them lurking around our borders. We had our deals with hordes of locusts before, and if we defeat the Alvino, I will assure you, these monsters do not stand a chance against the Polar Crystal Alliance. If they attack us, we will retaliate, and we will destroy them.”

“Insolent creatures. It has been so long since we first encountered, and yet you persist. I will enjoy burning your worlds to a cinder, I will laugh as you wither and die.”

“Not once have I had the displeasure of meeting blades with the Ganthorea and, in all honesty, I hope I do not have to anytime soon. We tell stories about them at night to children who do not behave themselves, that they'll be taken in the dark by them. ... Stories that I will not be telling my own children.”

“From what little I can gather, I tell already that they something to be feared. Greatly feared.”

“Dark outcomes for the future of Borealis involve the Ganthorea at many turns of events...”