The inhabitants of Cyrannus have greatly advanced technologically in the past few decades, evolving from seperated empires into large galactic communities. Perhaps the most famous of those inhabitants, the Great Thirteen Races of Capricyránae, all existed at different technological levels until recently, as their technological skills begin to merge.

The Galactic Empire of Cyrannus is one of the great political powers of the First Gigaquadrant, not only in terms of infrastructure and size, but also technologically, possessing similar technological capabilities to other "Tier 1/Class 8" civilisations, like the Civilisation (particularly member states such as the Delpha Coalition of Planets), and the former Krassio (before their transcendence) and Grox Meta-Empire. Astroengineering of vast power sources such as stars and hypermatter (the latter of which is scarcely harnessed outside Cyrannus) allows the inhabitants of the Empire to handle higher-mass and energy-based technologies as well as unimaginable computing power, not possible for less advanced civilisations and can probe greater dephs of the universe for scientific and philosophical endeavour. In fact, it appears that Cyrannus is currently undergoing a "Hyperspatial Revolution", comparable to the Agricultural, Industrial, and Megastructural Revolutions of planetary and interstellar societies.

To keep the page from being too technical (and the difficulties speculating alien and more advanced technologies), technology shall be done in application format, although a more scientific classification exists below:

"Laser" weaponns are not technically lasers in that they do not primarily involve coherent beams of photons. Instead, a turbolaser fires a charge of charged particles (essentially plasma). Most turbolasers are triggered to undergo nuclear fusion upon impact, which is a vast improvement over more primitive plasma weapons which cause little more than thermal or radiation damage. Such weapons, known as "laser cannons" to distinguish them from the more powerful turbolasers, are still used by the Empire in some situations.

Turbolaser and laser cannon technology can be included in either particle beams or projectiles. When in projectile form, turbolaser bolts often resemble truncated beams, but the visible portion is actually a wake of ionised plasma behind the bolt itsef.

Several other weapons similar to turbolasers are also in widespread use. Ion cannons are comparatively low-velocity (or rapidly-decelerating) and non-explosive devices, designed to disable deflector shields and cause electromagnetic interference by overloading circuitry. Proton torpedoes are fusion weapons like turbolasers, but have a full missile casing and are designed to be highly manoeuvrable.

Superlasers, despite the name, are not typical particle weapons like turbolasers; instead, they are beams of hypermatter, which is composed of particles that become unstable in the three dimensions of realspace and therefore quickly decay with a powerful burst of energy.

Hypermatter torpedoes are to superlasers what proton torpedoes are to turbolasers. Particularly powerful ones could potentially damage hyperspace where they are detonated, but the Empire does not used them for this purpose. This is especially true for the latest generation of hypermatter weapons, which are being miniaturised in an attempt to make powerful infantry technology. 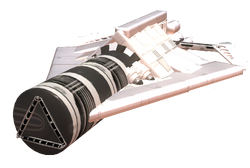 The "Matter Cannon" descends from a combination of high-energy weapons which are used widely around the universe. A focused stream of quark-gluon plasma and hypermatter is fired at ultrarelativistic speeds, followed by a coherent beam of gamma radiation timed in order to catch up with the massive particles a few nanoseconds before reaching the target. The gamma-rays, along with their usual mechanism of damage by ionisation, are also stimulated to produce particle-antiparticle pairs that themselves have enough energy to continue travelling near to the speed of light. At these speeds, even a few grams of matter hit the target with a petaton of TNT equivalent in kinetic energy, which is followed by the thermal and ionisation damage of the quagma and remaining gamma radiation.

Developed to combat threats such as the Cognatus in the Pre-Imperial era, interdiction fields are a form of subspace weapon used to distort hyperspace. The damage therefore interferes with faster-than-light travel, often rendering most forms (some wormhole drives are less affected) very difficult to impossible in that region, and this can be made to last for months or even years. Should pirates create an illegal trade route, a simple "graviton sphere" in subspace should put an end to it. If a homeworld needs defending from invaders only using hyperdrives, a temporary "sandbar" in subspace should wall away from the problem, allowing defending fleets to arrive.

Tests of very powerful interdiction fields have created anomalies in subspace, tearing a hole into realspace temporarily. These have disrupted or even destroyed stars (although typically more unstable varieties rather than main sequence dwarfs), because the subspace fissure pours in large amounts of unstable hypermatter into the star's core, rapidly increasing the rate of fusion. If this happens to a sufficient extent, the star will be rapidally aged, allowing its extreme gravity to overtake its outward radiation pressure. The resulting implosion causes the core to rebound against upper layers, creating a nova or supernova. This weapon has earned its fame throughout Cyrannus as the "Sunbuster".

On much a much smaller scale, work is being conducted to make more precise hyperspatial manipulation from the basic priniples of interdiction fields. Initial developments have resulted in faster-than-light tractor beams that can work over interplanetary distances, while further advances are likely to result in effective telekinesis.

Vortex torpedoes fire micro black holes, which are created by several ways; often by catapulting high-density materials towards each other at close to the speed of light, or byfocusing powerful lasers onto a single point, both of which can produce a volume with high enough energy density to form a black hole.

Micro black holes decay very quickly due to the release of thermal radiation, and therefore need a constant feed of energy to maintain them. For casing, a black hole needs to be kept in a hollow sphere with uniform gravity on all sides, and to maintain equilibrium during acceleration, the black hole and case both need to be electrically charged.

Many projectile weapons in the Empire have non-phasic deflector shields, allowing them to penetrate further into targets or even (if self-propelled) attack a target several times.

A hyperspace missile is a weapon that is designed to bypass physical defenses in realspace by reaching its target from hyperspace, often within the target itself. First developed in the modern era (or popularised at least) by the Delpha Coalition of Planets, some members of the Onuris Alliance, particularly the previous United Republic of Cyrannus, began to use these devices. They may or may not carry a payload (even these weapons can carry a local hyperspace shockwave), which could be anything ranging from the exotic, to more commonly used antimatter-catalyst conversion weapons and fusion bombs.

A transphasic torpedo continiously shifts energy states to confuse the sensors for adaptive deflector shields. While there are lots of definitions for transphasic technologies, a typical transphasic torpedo releases this energy in the form of virtual particles by pinching the quantum foam that underlies reality away from its metastable vacuum state using exotic matter (not unlike warpdrive technology). The sudden release of energy not only provides an effective subatomic weapon but also temporarily warps minor stresses into spacetime that can easily destroy molecular structures when space relaxes. Very useful against nanotech-shields and weapons, as well as organic structures.

A railgun is a simple but effective kinetic weapon that requires no payload. The missile is launched from an electromagnetic rail which accelerates into high speeds, a useful weapon to pulverise exposed hulls and ship equipment when the target's shields drop.

Non-phasic shields are the powerful time of deflector field, like all force fields they work by nullifying the effects of kinetic impacts and absorbing directed transmissions of energy by discharging the forces within matter such as electromagnetic fields. Most shields are phasic or multiphasic, meaning that they constantly need recharging from the ship when bombarded by enemy fire, however, non-phasic sheilding somehow feeds on itself, perhaps by taking energy from spacetime itself, making it much tougher to bring down that other times of deflector.

For centuries, stealth technology worked by using meta-material that bend light around physical objects rather than absorbing or reflecting light. In more recent eras starships used nanotech "utilityfog" which absorbed light then bent a holographic picture behind the ship and relayed it to the front, but this system was never perfect as the nanotech foglets needed constant sources of power, a ship coudn't cloak and use much firepower at the same time. In recent years, scientists discovered ways of locally bending space using gravitational technology around physical objects. This also has the effect of bending directed energy around the craft as well, it is still difficult to achieve this with smaller craft.

All civilisations in the universe need to expand, and the larger they are, the faster materials and people must be transported.

Most large Imperial ships possess the ability to create and traverse individual wormholes, providing instantaneous arrival at potentially any destination in the Gigaquadrant. However, due the energy requirements involved, the use of hyperspace is often used for shorter distance travel.

Hyperspace is an alternate state of existance that can be accessed by the Empire for faster than light travel. A common hyperdrive is capable of allowing a ship to traverse the galaxy in the space of only a few hours, though it depends on how advanced the hyperdrive in question is, for example, the hyperdrive on an Imperator-class Star Destroyer would allow the ship to travel much faster in hyperspace than a civilian ship.

Miniaturised hyperdrives are being developed that allow for individual teleportation, and instanteous mental communication through hyperspace is also becoming more common, but both are currently restricted to elite and experimental military units and will likely remain there for the near future.

The materials that the Empire employs have to be lightweight but extremely resilient against the stresses of space travel. The hulls on starships need to survive the jump into hyperspace, as well as space debris, high radiation levels, and of course, enemy weapons fire. The Empire has yet to employ more exotic states of matter, however, the alloys it uses are manufactured with the strongest chemical bonds possible, in materials such as duranium and tritanium. Although this is fairly typical among interstellar civilisations, this is not a bad thing; such materials have proven their versatility. Nanomolecular machines are also used a lot in the construction of starship compenents, and some warships use these as a form of regenerative armour.

Superconductors that are capable of "quantum locking", frictionless transportation, as well as antimatter storage at both high and low temperatures, are used on a large scale for the handling of reactive substances and the mechanisms in spacecraft propulsion.

Retrieved from "https://spore.fandom.com/wiki/Fiction:Galactic_Empire_of_Cyrannus/Technology?oldid=680163"
Community content is available under CC-BY-SA unless otherwise noted.