01 NE
“Some of the Imperatore's detractors do not fully understand the extent of our power, lulling themselves into a false sense of security. The galaxy, they say, is vast, spanning across countless lightyears comprising thousands upon thousands of stars - surely, there must be somewhere one could hide from the Empire! They are not completely wrong. Cyrannus is indeed boundless, even more so than other galaxies - far too large for an ordinary organisation to oversee. Unfortunately for them, however, the Imperial Intelligence is no ordinary organisation.”

The shadowy Imperial Intelligence is an enigmatic force that operates behind the army, navy and various other branches of the Imperial Military. Often known as "ImpIntel", Imperial Intelligence is made up of countless agents, strategists, spies and experts at deception making it an organisation that is both feared and respected across the galaxy. Under the direct command of the Emperor, and secretly his followers, Tyrómairon instead leaves command of the organisation to a mysterious Bisistar known as Moranonúngur, though notable operatives also included the deadly Caranye Valaeris, prior to her defection to the Republic in 15 NE, and the Qiranit Radeon Agnassana. However, it is often said by those within the Empire that the best agents of Imperial Intelligence are those are who never seen.

Imperial Intelligence is arguably the most controversial organisation within the Empire, with its extensive population of spies being a major source of paranoia among the other nations of the First Gigaquadrant. However, it is also the deadly and feared reputation of the Empire's unscrupulous agents that spark fear in the galaxy's natives. Much like their Emperor, Imperial Intelligence plans for every possible scenario and consistently works to ensure that the Empire comes out on top.

The origins of Imperial Intelligence lie in both superpowers that fought in the Great Cyrannus War, with both Republic Naval Intelligence and its Confederate counterpart combining their intelligence pools and resources under the directive of Tyrómairon's Bisistar enforcer Lord Moranonúngur, who used his people's natural aptitude for subterfuge to greatly expand the reach and influence of the newly formed Imperial Intelligence agency.

Early operations in the first years of the Empire's rule over Cyrannus include the creation of the Gigaquadrant-spanning pro-Imperial cult Asdran'Ari and the fanning of the flames of rebellion within the Imperion in the Quadrant Galaxies at the hands of the infamous Agnassana.

Upon the outbreak of the New Cyrandia Wars, which included a campaign against the Empire by the newly formed Vasubandian Rebellion, Imperial Intelligence was tasked with protecting the Empire by infiltrating potential Imperial enemies and work against them from within. Due to the high feelings of paranoia surrounding Intelligence, conspiracy theories also abound that Intelligence is one of the actors involved in the recent destabilisation of Gigaquadrantic powers, a suggestion that the agency's more public representatives are quick to coyly deny. With the formation of the Imperial Inquisition, agents of Imperial Intelligence often worked in consort with their new Inquisitorial colleagues, leading to some tension between the two organisations. Meanwhile, a new secret weapon was recruited to join the agency, the young Ortella agent known as Caranye Valaeris, who distinguished herself as one of Intelligence's most trusted assets.

With the onset of the Cyrannian Cold War between the Empire and the New Cyrannian Republic, Imperial Intelligence fell under the aegis of Ela-Mu-Ní, who became known simply as the Director. Working closely with Agent Caranye and the Imperial Intelligence AI Eternal Enigma, the Director orchestrated the collapse of a Resistance cell on Antemurale, though both he and Caranye grew disillusioned with the Empire upon the onset of the Second Great Cyrannus War in 15 NE, which resulted in Valaeris defecting to the Republic. Her departure dealt a considerable blow to Imperial Intelligence, and granted their adversaries in the New Republic Strategic Intelligence an advantage as galactic war erupted across the Cyrannus.

For good reason, Imperial Intelligence is unquestioningly the most feared intelligence organisation in the long galactic history of the Cyrannus Galaxy, maintaining a vast and arguably impenetrable system of agents active throughout Imperial space and undoubtedly beyond it. Indeed, it has been theorised by Grand Mandator Taev Vosaetiur that Intelligence operates agents on every world in both the Imperial and Republic sphere of influence, including sleeper agents programmed to live seamless lives within the worlds on which they are stationed, only to be activated at a moments notice by their superiors. Imperial agents are equipped with the very latest in Imperial personnel technology, including terrifying stealth ships that are a feared sight throughout the Gigaquadrant.

“Power is not a means to an end - it is an end. The object of power is power.”

Agent Agnassana Neroth'aina is one of the highest ranked agents active within Imperial Intelligence. A former Mandator of the Cyrannian Radeon, Agnassana's ambition and desire for greater power brought her to attempt to assassinate her political enemies in the Mandator Council, which gained the attention of the Emperor himself. Stripped of her position, Agnassana was instead directed to Imperial Intelligence, where she has begun to show her new loyalty to the Empire. However, she is no less self-serving than in her past. She is a ruthless, power-hungry woman who is ready to commit horrible atrocities to further her goals and that of the Empire.

“The Empire is ascendant. A blind lobotomy patient can see that.”

Justiciar Curwe is a female Basileus who serves as both an agent of Imperial Intelligence and a Lord of Tyrómairon's Phaedric Order, granting her a level of unseen influnece within Intelligence that is rivalled by few. A deceptive, charming and unquestioningly loyal individual, Curwe has been at the centre of many of Intelligence's most risky operations, such as the manipulation of the Asdran'Ari cult as well as subterfuge within many of the Empire's more unfriendly rivals. Curwe's position of Justiciar is carried over from her service in the intelligence agency of the old Basileus Imperium.

Agent Agrehele is a female member of the elusive blue-skinned humanoid race known as the Listhar, a species whose natural skills at subterfuge and deception are considered second only to the Bisistar. Embodying these traits and indeed the ideal of the perfect Imperial Agent, Agrehele is a fervent believer in the Emperor's vision of the galaxy and has very little time for those who work against this vision, being instrumental in the arrests of hundreds of dissidents within Imperial space during the first years of the Empire's reign over Cyrannus.

“I love assassinating assassins. They're always so shocked.”

Caranye is a female Ortella who served as a special agent of Imperial Intelligence prior to her defection in 15 NE. Carayne was considered the most deadly operative of Intelligence by many, and was skilled in the ways of assassination and infiltration making the young Ortella one of the Empire's secret weapons. Thanks to the infamous permeability of Imperial Intelligence throughout the Cyrannus Galaxy, Caranye was afforded the ability to traverse the entire galaxy with an almost debonair disposition, confident in her former loyalty the Empire but also her own sense of superiority over the myriad of enemies faced by the Empire in the Gigaquadrant at large.

As one of the most important organisations operating within Imperial space, Intelligence is supplied with a seemingly unlimited supply of resources from across the Emperor's gigaquadrantic domain. Agents employed by Imperial Intelligence are often equipped with state-of-the-art technology to aid in their role as infiltrators, including the use of holography to disguise their appearance. This however, stems from the practice of intelligence agencies in Cyrannus since the days of the Federation of United Worlds, with the modern Imperial incarnation of these agencies being far more advanced, particularly in the field of stealth starships used to track down and destroy the enemies of the Empire. Unlike the Imperial Inquisition however, Intelligence agents rarely engage in large-scale battles and instead are more adept at influencing events from behind the scenes. Nevertheless, many agents with a particular proclivity for martial arts aspire to join the ranks of the Inquisition.

“Give me supply lines, a Star Destroyer, information from Imperial Intelligence and a troublesome civilisation and I'll have them singing the Imperial Anthem by the close of the week.”

“No wonder there is so much mistrust in the Gigaquadrant with organisations like this.”

“Never attempt to win by force what can be won through deception. That is both my philosophy and that of Imperial Intelligence and it has served the Empire well.”

“Clearly, Intelligence agents are just as deadly and unaccommodating as their Inquisitor rivals.”

“I do miss my days in intelligence. Though I enjoy the new perks brought on by the Inquisition, there was a simplicity to the Intelligence that made it...charming.” 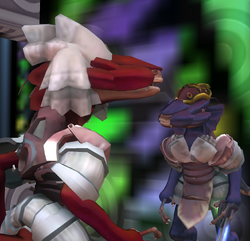 Justiciar Curwe convincing a Basileus Cardinal of Asdran'Ari to serve the Empire. 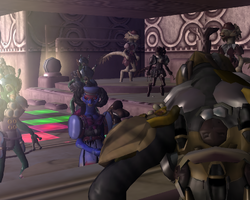