Cyrannian
“No force in the cluster can challenge the might of the Imperial war machine.”

The Imperial Military is the marshal force of the Galactic Empire of Cyrannus, established in 01 NE by Emperor Tyrómairon. Though Tyrómairon retains direct control over the military of the Empire, day-to-day runnings of the vast military complex is overseen by Imperial High Command stationed on the endless Imperial capital world of Orbispira. After the Emperor's rank of commander-in-chief, the Imperial Admiral of the Navy is the next highest rank followed by other high ranking generals and admirals of both the Navy and the Army.

Though the Navy and the Army are arguably the most important branches of the military, no less notable is Imperial Intelligence, an often shadowly organisation with elite agents who ensure the Empire's dominance in galactic affairs. Imperial Intelligence is one of the most feared organisations in the Gigaquadrant, with even members of the other branches of the military fearing the relentless agents of "ImpIntel".

Functioning as both a physical and mental power, the military is a truly massive organisation with dozens of trillions of officers, enlisted personnel and ground troopers firmly establishing its place as the galaxy's sole hyperpower.

“Within a few hours, democracy had been smashed, two superpowers relegated to the history books and an Emperor now ruled with a vast military machine answering to his orders alone.”

Though established with the declaration of the Empire, important elements that would later be seen in the Empire's military could be readily seen in the final years of the Cyrannian Republic. As the Great Cyrannus War raged, massive shipyards churned out planet-annihilating Star Destroyers while troops and officers intensely loyal to the Republic joined the ranks of the Republic's naval, army and intelligence services. However, when the Great Cyrannus War met its conclusion, both the United Republic of Cyrannus and the Confederacy of Allied Systems were wiped from the face of the galaxy and the new Imperial power inherited not one, but two massive militaries. Though the Republic Military was the single largest forebear of its Imperial successor, senators no longer had control over their sector's military forces, which instead fell to the new position of Mandators, a political and military title synonymous with governor.

Though most in the galaxy believed that with the war over, the Empire would wind down its assembly lines, the opposite proved the case with the Imperial military expanding exponentially. Justification came from the Outer Rim, a region of the galaxy which often ignored the government of the Republic, instead turning to criminals in what was seen as a hotbed of rebellion and dissent. However, for the Imperials, this era had ended.

In light of the conflict between the Empire and Rambo Nation as well as attacks by terrorist organisations such as the Confederacy of Free Planets and the Capricorn Remnant Alliance, the Empire continued its massive military build-up. Though this was primarily of benefit to the Navy, which gained the Imperator-class Star Destroyer, the army also saw the development of deadly new war machines and battledroids while Imperial Intelligence continued to recruit agents in its nefarious attempts to sow disorder across the non-Imperial Gigaquadrant.

The main ground force of the Empire, the Imperial Army maintains garrisons across the galaxy and is infamous for its use of titanic war walkers and endless legions of intensely loyal Imperial Stormtroopers. In a variety of operations, the Army works closely with the Imperial Navy and Imperial Intelligence, with a friendly rivalry existing between the navy and the army in part due to the perception many in the army hold that the navy is controlled by the upper echelons of society. The Imperial Army's resources are infinite with its might and power being enough to project Imperial dominance throughout the galaxy.

Officers in the army often wear white uniforms, compared to the grey uniforms of the navy and the black uniforms of Imperial Intelligence. Though stormtroopers represent the most visible sign of the army on an Imperial planet, battle droids make up a large percentage of the fighting units of the Empire while Imperial walkers remain the pride and joy of the commanders that pilot them.

The army is headquartered on the Outer Rim planet of Antemurale.

The shadowy Imperial Intelligence is an enigmatic force that operates behind the army, navy and various other branches of the Imperial Military. Often known as "ImpIntel", Imperial Intelligence is made up of countless agents, strategists, spies and experts at deception making it an organisation that is both feared and respected across the galaxy. Under the direct command of the Emperor (and secretly his followers), Tyrómairon instead leaves command of the organisation to a mysterious Bisistar known as Moranonúngur, though notable operatives also include the Basileus Curwe and the Lishtar Agrehele. However, it is often said by those within the Empire that the best agents of Imperial Intelligence are those are who never seen.

Imperial Intelligence is arguably the most controversial organisation within the Empire, with its extensive population of spies being a major source of paranoia among the other nations of the First Gigaquadrant. However, it is also the deadly and feared reputation of the Empire's unscrupulous agents that spark fear in the galaxy's natives. Much like their Emperor, Imperial Intelligence plans for every possible scenario and consistently works to ensure that the Empire comes out on top.

“Halt in the name of the Cyrannian Imperial Navy!”

The Imperial Navy is the naval force of the Galactic Empire of Cyrannus, fielding millions of warships, science vessels and countless military personal. The Navy maintains Imperial control across Cyrannus and beyond. The Imperial Navy was primarily formed from the Republic Navy, which served the United Republic of Cyrannus until the aftermath of the Great Cyrannus War. Since then, the navy has expanded enormously, becoming one of the most feared armed forces in the history of the First Gigaquadrant.

The Navy is under the direct control of the Emperor, who is represented with the use of a Imperial Admiral, currently Zillum. Like the Republic Navy before it, the Empire employs fearsome and ultra-advanced wedge shaped warships known as Star Destroyers, however many other ship types are also used to some extent.

“The executors of my will.”

“The bane of countless star systems. Order through fear is no way to rule.”

“The military promotes peace, order and civilisation in the galaxy. I shudder to think what it would be like without it.” 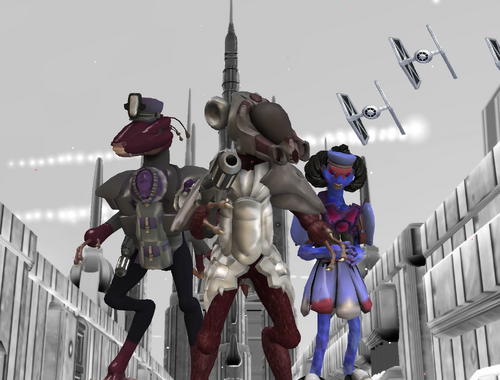 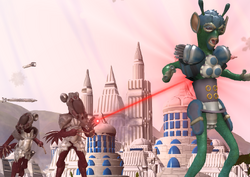