The French Quadrant Colonies, also referred to as French Quadrantia, compose an administrative region of France located in the Quadrant Galaxies. They were established in 2797 as part of France's ongoing efforts to spread its influence to other galaxies.

The French Quadrant Colonies were first fronted in 2795 as a purely economic venture by Michèle Bélanger, the Minister of Economy of France, in a proposal to the French National Assembly. Bélanger and her office had spent time surveying the economic conditions of various galaxies and had noticed the unused potential of the Neutrality Zone and the space around the Ramsoria Run Trade Route.

The proposal called for the creation of several colonies along the trade route under close supervision of the French National Government and included a detailed plan as to how these colonies would grow into a burgeoning trade empire in the Quadrants. After much debate and scrutiny, the proposal was approved, and in 2797, the colony of Galactica was founded near Ramsoria Run. Unknown to the French, the Drodo Empire had also established a presence nearby, and their accidental meeting engendered a short colonial war which lasted a grand total of eight days.

Despite this rocky start, French Quadrantia and the Drodoian Quadrant Colonies began a fruitful trade relationship. Later that year, they founded the Neutrality Zone Trade Organization with the aim of carving the Neutrality Zone between their respective spheres of influence. During the conference, the French also announced their intentions to build the French Quadrantia Trade Route. Having garnered enough investors during the conference, they were able to go through with the project. It was completed a year later, in 2798. 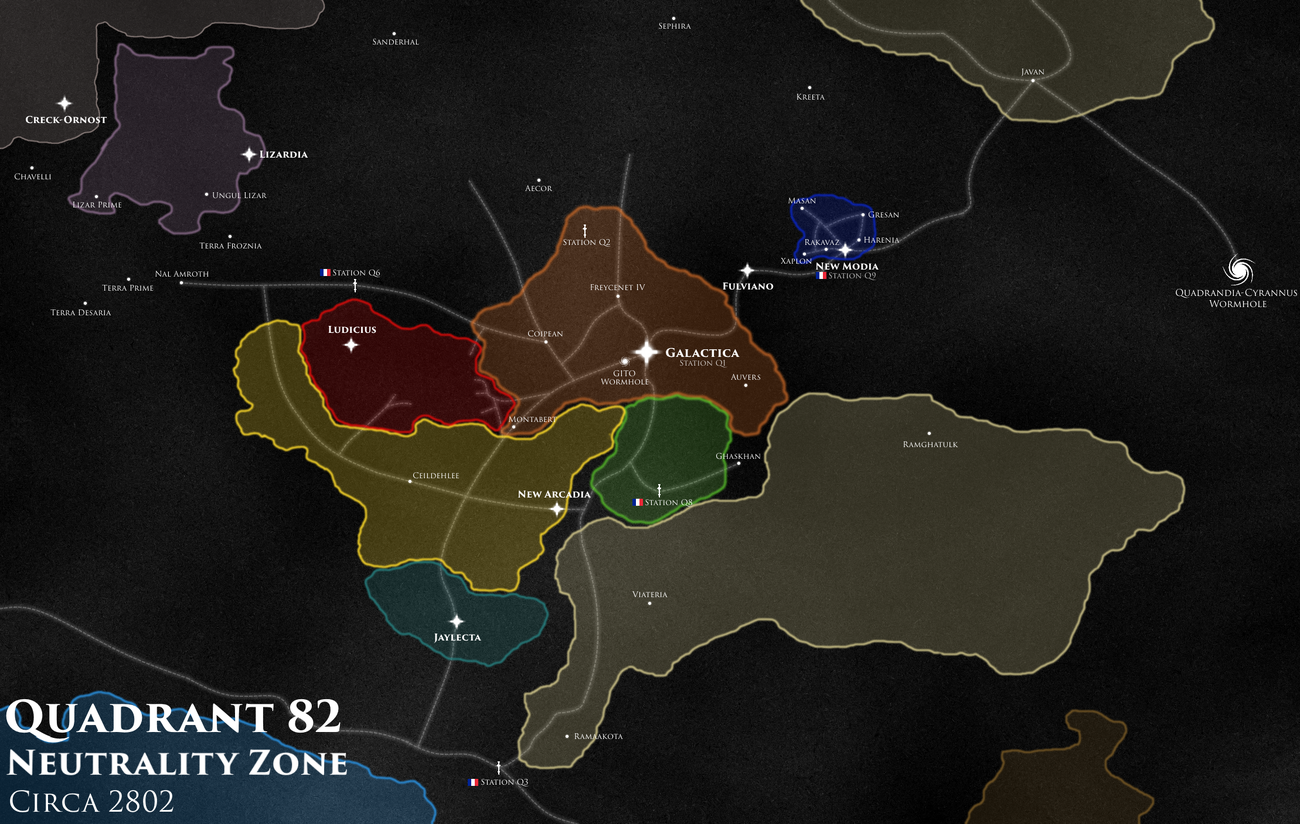 Completed in 2798, the French Quadrantia Trade Route is one of France's most important assets in the region. It provides a link between the Ramsoria Run Trade Route and the Draconid Imperium wormhole, and it is through there that traffic from Andromeda must pass in order to trade with Quadrant 82. France exacts a small toll in exchange for entrance to the hyperlane, making it an important source of income. The 1st Colonial Group maintains the route and patrols it out of several military bases along it, including three Nante-class stations.

Though the government of the French Quadrant Colonies is supposed to be something akin to a representative democracy subordinate to the National French government, it functions very much like a company. It is overseen by an executive office, the Governor of French Quadrantia, which is appointed directly by the French Parliament with approval from the President and Prime Minister.

The colonial legislature, on the other hand, is elected by the local population. It is composed of the General Assembly, representing the population of the colonies at large, and the House of Commerce, elected by influential business sectors and individuals. Both houses de jure have equal power over legislative action in the colonies. Though it is strictly illegal for individuals and companies to use currency to influence votes in the General Assembly, bribery and corruption is rampant. Even the agencies dedicated to rooting out foul play are routinely paid off to look the other way. As such, the government of French Quadrantia is dramatically slanted towards business and imposes very few regulations on it.

While France has a very large socialist economy where the government has command over factors of production and trade, the Quadrant colonies field a very active mixed economy which primarily uses the Drodoian Colonial Dollar as an official currency for foreign and domestic exchanges. The government of French Quadrantia still has control over most of the colonies' resources and provides for its citizens the means to live, but an increasingly large group of private citizens are taking advantage of the booming economic conditions to enrich themselves through investments in French and foreign markets.

Ever since their founding, the Quadrant Colonies have been enjoying highly concentrated economic growth and are lavishly wealthy as a result. They have command over the Ramsoria Run Trade Route which gives them access to markets all over Quadrant 82 and beyond. This has allowed them to cultivate a burgeoning center of commerce on planet Galactica and to spread their interests throughout the Neutrality Zone and Unexplored Regions.

Through the Neutrality Zone Treaty Organization and trade agreements with such nations as the Mardvaeli Republic and Greater Hal'Sk Empire, France has been able to further consolidate a significant portion of the region's wealth into the French Trade Network.

“We are bound to do great things together.”

“You have made an enemy of the French. That is not a wise move.”

Retrieved from "https://spore.fandom.com/wiki/Fiction:French_Quadrant_Colonies?oldid=693422"
Community content is available under CC-BY-SA unless otherwise noted.