The French Mirus Colonies, also referred to as French Mirus, compose an administrative region of France located in the strategically-significant Mirus Galaxy. Established in 2795 in the aftermath of the Dominatus War, the colonies are composed of France's many military bases and conquered territories in Mirus, as well as newly-formed civilian infrastructure as part of a push by the French government to broaden French influence in the area.

By the year 2792, the expansive Drakodominatus Tyranny underwent a massive slave revolt which crippled its industry and ability to supply its troops. Taking advantage of its weakness, the Tyranny's enemies––including the human Orion League––declared war on it and began a hard-fought war to bring an end to the Dominatus. Eventually, they were pushed out of Andromeda, followed by Bunsen and the Milky Way, until finally, in 2794, the allies entered the Tyranny's home galaxy of Mirus.

The Mirus campaign was one of the most fiercely-fought in the history of the Gigaquadrant, but the Tyranny was finally vanquished and its territory split up between the victors. The sectors nearest to the galactic center, named Godric's Arm after a fallen human commander, went to France. The territories were dead worlds, the carcasses of civilizations, their populations having been reduced to mindless drones in service of the Tyranny's war machines.

In 2795, the French Parliament ordained the creation of the French Mirus Colonies, "a political entity comprising a temporary military government of conquered territories of Mirus." After heated ethical deliberation in the French National Assembly, the French Parliament gave the order to euthanize the population of biodrones and to appropriate the Tyranny's infrastructure. Work that had begun on finding methods to repurpose the Tyranny's factories in the Milky Way was eventually finished in Mirus, and slowly the French-owned territories were turned into enormous manufactories, churning out equipment and materiel that would be used throughout the French Colonial Empire or sold to other nations.

The French Mirus Colonies are unique in that the vast majority of its territory is under direct military control. Only Sector 2 falls under the jurisdiction of the civilian government. This makes sense, as it is the only sector with a civilian population. The other sectors are lifeless expanses, the remains of dead empires destroyed by the Dominatus during their rise as a Mirusian power, replaced by machinery to service their ambition.

These machines have been rebuilt and automated by the French Armed Forces, turning the Mirusian territories into an enormous chain of manufactories with a greater industrial power than the rest of the French Colonial Empire put together. 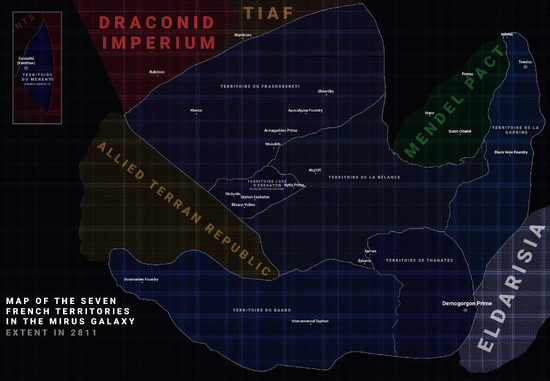 The French Expeditionary Corps constitutes the presence of the French Armed Forces in the area. At its peak during the Dominatus War, the formation contained 90% of France's deployable troops, including many reserve units towards the end of the war. Five years later, the French Starfleet still maintains a substantial presence in Mirus. Based out of a series of Nante-class stations positioned strategically along Godric's Arm, various elements of the Starfleet come to train and engage in wargames far from the prying eyes of rival civilizations.

“We are bound to do great things together.”

“You have made an enemy of the French. That is not a wise move.”

Retrieved from "https://spore.fandom.com/wiki/Fiction:French_Mirus_Colonies?oldid=646179"
Community content is available under CC-BY-SA unless otherwise noted.