Created by Charles Murray and Dinoman82

The French Exeter-class is a modification of the Rambo Nation vessel of the same name. It was acquired by the French Quadrant Colonies in 2798 as part of a technological exchange with the Rambo, and has since come to represent France's growing colonial presence throughout the First Gigaquadrant.

The Constitution line of heavy battle cruisers is one of the most well-respected series of starships ever fielded by Rambo Nation. Upgraded and modified through the centuries, they saw much of Rambo history, acting as exploration vessels and as heavy firepower when it was needed. In 2796, a new modification to the class, the Constitution Exeter sub-class, often simply referred to as Exeter-class, brought a sleeker design, updated shields and warp core, and a cloaking device to the Rambo arsenal.

The Exeter-class, inherently a military craft, quickly became the most common battle cruiser in the Rambo Starfleet as all Constitution-class V2 Mk II's were refitted to fit the design of the class. Due to instabilities with the class' warp core and cloaking device, the class was pulled within a year and was replaced by the Constitution Refit Class Mk. IV.

In 2797, the French French Quadrant Colonies opened an international arms market on their regional capital of Galactica, creating a forum where military materiel might be traded and sold. Later that year, officials from Rambo Command visited the market, looking for an affordable omnirole fighter. They inspected various designs like the French Mirage Roi, the Eurofighter Hurricane, the American Super Revolution, among others. A week later, examples of these were sent to a Rambo military facility to be tested by Rambo pilots. In the end, the oft-forgotten Franco-Roreinian Mirage Cascabel won out, chosen for its flight characteristics and affordability.

In terms of payment, the Rambo offered up several of their older starship designs such as the Exeter, Miranda, and Columbia classes. After thorough review by French engineers and commanders, the Exeter-class was chosen on the grounds that France lacked an all-round colonial vessel and was struggling as a result. This view was particularly held by Marshal Aurélien Ortiz of French Quadrantia's 1st Colonial Group who had repeated voiced complaints in the past.

The Exeter-class was heavily modified to French purposes and slowly began to be implemented on a small scale. Ortiz, impressed by the craft's performance, petitioned to the colonial legislature that more be ordered. By 2799, they had swelled the ranks of the 1st Colonial Group and allowed it to extend operations beyond what had been previously thought practical. Its speed, size, and considerable firepower were greatly appreciated on the frontier. Ortiz's strong endorsement and the craft's performance led to the French Starfleet adopting it as the primary French colonial vessel later that year, and it has had a strong presence in French colonial efforts ever since.

With the help of Rambo engineers, the French extensively modified the Exeter-class to fit their purposes. While it remained a military craft in design and function, it was outfitted with a variety of facilities to broaden its use on the frontier. The resulting craft is still 289 meters in diameter and is divided between four distinct parts: the saucer, the neck, the hull section, and the nacelles. Turbolifts, comm systems, and transmatter system provide communication throughout the ship. Crew and guest quarters are found mostly in the saucer section and the neck, though there are less of these than in the Rambo Exeter-class, as the French incorporated numerous automation techniques that reduce the crew necessary to operate the class from two hundred personnel to just thirty. The extra space freed up by automation was given mostly to weapons systems. The bridge, a Rambo-style command center of the craft, is located at the center of the saucer section and has easy access to the rest of the ship by its own turbolift.

In the hull section are numerous cargo bays and a hangar which opens to the rear of the craft, capable of accommodating small craft like the Agamemnon shuttle and Mirage Roi.

For its size, the Exeter-class can unleash an impressive volume of fire. It inherited Rambo phaser arrays which are distributed along both sides of the saucer section, effectively enabling the ship to fire in all directions. The torpedo bay, tooled to launch standard issue French antimatter torpedoes and other such missile weapons, is located in the neck and is able to fire in two directions: forward and aft.

The main deflector dish is located at the front of the hull section and glows a bright blue even when not active.

For sublight propulsion, the Exeter-class uses a system of thrusters distributed about the ship, allowing it to orient itself and accelerate in every direction more easily than any other French ship. Given this, it comes as no surprise that the class is valued for its mobility.

The class also replaces the Rambo warp drive with a French hyperdrive built especially to fit the class which resides in the hull section. It is fed into by the nacelles, essentially enormous hypermatter containers capable of storing enough fuel for long voyages through hyperspace. 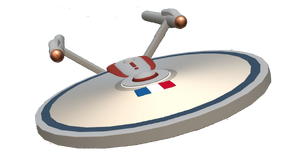 Retrieved from "https://spore.fandom.com/wiki/Fiction:French_Exeter-class?oldid=638479"
Community content is available under CC-BY-SA unless otherwise noted.