The French Starfleet, officially the Armade française (English: French Armada), is the stellar navy of France.

The doctrine of the French Starfleet has changed considerably in the past few years with the advent of reliable hyperspatial weapons, most notably the Angelfire anti-starship missile. These weapons moved the focus of warfare into hyperspace, stretching engagements over thousands of light years. In these contests, the chief deciding factor is the amount of missiles fielded by either side and how quickly those missiles can be intercepted before they reach their targets. Thus, France also developed numerous countermeasures like hypermatter-based close-in-weapon-systems and hyperspatial anti-air missiles which can intercept both strike craft and hyperspatial missiles at a short range. However, such defenses will easily be overrun if presented with too large a barrage of missiles.

All starships belonging to the post-Dominatus War generation are tooled especially for hyperspatial warfare, possessing these technologies as well as sleeker and more efficient designs which reduce their signatures in hyperspace. The Centenaire-type hyperdrives especially were designed to mask their emissions, thus making French ships harder to track and lock on to in hyperspace fog.

That is not to say that modern French ships cannot fight in realspace. All of them are still equipped to handle conventional warfare scenarios. In fact, some hyperspatial weapons, like the Garand I cannon used by the Adrianne-class cruiser, play on the different properties of hypermatter and serve different purposes in hyperspace and realspace.

France's greatest strength is the Torrent, currently one of the most advanced omnirole fighters in the Gigaquadrant, and the Archange-class battlestar. When used together, those two pieces of equipment are supremely formidable foes, though their high price makes them few in number. Filling in a missile and strikecraft defense role in the French Starfleet are the Adrianne-class cruisers which are affordable and efficient starships, but are merely average in performance by Gigaquadrantic standards. Finally, the Exeter-class light corvette and its derivatives fulfill lighter patrol, screening, and reconnaissance roles within Starfleet operations. 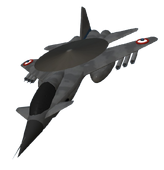 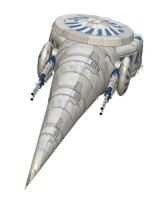 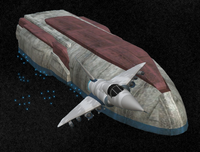 A French Mirage Roi at the famed Battle of Manticore.

French and Fjord starships converge on a Mashriqi battleship during the East African Civil War.

An Orleans-class carrier launches fighters in 2796.

Elements of the First Colonial Group on patrol in 2798.

Retrieved from "https://spore.fandom.com/wiki/Fiction:France/French_Starfleet?oldid=737572"
Community content is available under CC-BY-SA unless otherwise noted.