The Cognatus were an alien alliance which was created by the ruling empire of the Cognati. They had complete control over dozens of galaxies and often destroyed empires along their path of divine retribution.

Few empires were lucky enough to be accepted into the alliance, all of which can be seen below. The Cognatus controlled over 60 million colonies and having ultra advanced technology, the Cognatus were among the most dangerous empires in the universe.

However, their union became divided after the Intergalactic War, with the vast majority of the Alliance becoming swallowed up by the even more powerful Catharsis, while a small, yet still powerful, faction survived in Cyrannus, becoming the Cognatus Remnant

In the immediate months prior to the beginning of the Intergalactic War, the Cognatus Alliance began exploring the Unknown Regions of the Cyrannus Galaxy, searching for long lost Atlantica and Thirteenth Tribe artifacts and constructs. Eventually, they came across a world sacred to both the Cognatus and Rambo Nation, who would also eventually discover it. When they did, the Cognatus were furious and began a genicidal campain against the United Republic of Cyrannus and Rambo Nation.

This war would last for years, and all sides would face extreme casualities, though the Cognatus continued their genocides regardless. Eventually, the Cognatus brought the Cyrannian Republic to it's knees, attacking their homeworlds of the Twelve Colonies. As the battle raged on, the Cognatus became aware of a sacred portal of the gods. When they finished uncovering it, they entered the portal, into what they believed was the Realm of the Gods. However, the Thirteenth Tribe redirected the portal to exit in Catharsis space, where the vast majority of the Cognatus were consumed by the Purity Virus.

However, some survived this fate and lived on in the form of the Cognatus Remnant, which abandoned their zealous ways and became allies and later members of the Cyrandia Alliance, helping their former enemies against threats like the Confederacy of Allied Systems and the Cyrannian Neraida.

The Cogsangui were the military leaders of the Cognatus, known to be deeply committed to the Cognatus gods and their cause. However unknown to the alliance, they are fair, respectful and ironically the most tolerant race. Cogsangui are very intelligent and can generally speak many languages and write superbly, this is mostly to do with the education system which is strangely one of the greatest in the universe.

The Defiler were the smallest and lowest of the Cognatus races. They were generally not a threat, however, the Cognati often sent hordes of them charging relentlessly toward an enemy. Despite their fear of the other Cognatus races, they were often seen fleeing from a fight. 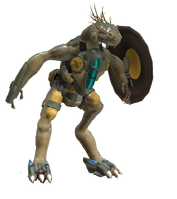 Scavengers are still, like their Defiler rivals very low ranked and mistreated.They are naturally without emotion and have sworn their already large space forces to the Cognatus army. They originally opposed Cognatus rule, however they were tamed by the more powerful Cognati armada.

The Nequam, are gigantic, idiotic brutes whose only function in the Cognatus is to cause fear, they are seen as vermin by the Cognati and most of the other races in the Cognatus, but the sheer force of their strength is the only thing which keeps in the Alliance. Before they entered the alliance, they were not even sentient. But the strength of the creatures themselves persuaded the Cognati to uplift them.
Add a photo to this gallery

The most famous and notable individuals of the Cognatus Alliance prior to its destruction will be listed here.

Thel'Vicliquam is the Captain of the Cognatus Assault Carrier the "Shadow of Liberty". Not much is known of his early history and he was first revealed and sighted during the early stages of the Intergalactic War. He seems to be over 228 years old.

He carries a double bladed electric sword and a small pistol, his purple armor indicates his long time service and he wears a small cape. His helmet he made himself. He also seems to be a past friend of The Warrior of the Hieroarchs. His second in command is Rtas'Shagili.

The Cognati Ultra Rtas'Shagili is the second in command of the Shadow of Liberty and a good friend of Thel'Vicliquam. Proudly of every decision he makes he follows Thel´Vicliquam everywhere, but he sometimes argues with him if he doesn't agree with him. Rtas'Shagili also has a tendacy to underestimate his enemies, which was later shown when the Cognatus Fleet had to withdraw from the Rambo Capitol Planet during the Final Battles of the Intergalactic War.

He later had to face the fact he left his captain behind, but was not punished. He remained an Ultra and is still second in command of the Shadow of Liberty.

A Cognatus Captain, he served the Cognatus Alliance and was first seen when he attacked Rambo Nation and URC forces on the Shrine of Selenyia, which was recenlty discovered. However he underestimated both the URC and the Rambo and was captured. After capture he refused to tell his name and was known as the Unknown Cognati Captain to Rambo Nation, as they send him to the Ramghatulkiaga Orbital Prison.

He sat there for over 3 years and was frequently interrogated. However, not revealing a thing he was freed by the Confederacy and promised to serve them. However this was a ruse as he had no intentions of serving with heretics.

Taking command of the Mortalitas Dreadnought Burning Heretic he attacked the Rambo Prime Space Station, which monitored the Wormhole Plataue. Hiring a bounty hunter known as Zavracence he learned of the Rambo Nation Ivaleä Sensor Arry which could contact his species so he could return home. But the bounty hunter betrayed him and Captian Ramcard of the USS Dallas captured him and send him back to Ramghatulkiaga Prison.

“The Gods have shined their light on our union”

“I'm ashamed on the path my people took to honour the gods. We hope to improve our standing in Cyrannus today by learning the mistakes of the past.”

“A large and genocidal empire, I'm glad they've chosen to turn away from their past toward a brighter future.”

“You were incompetent, and got what you deserved.”

Retrieved from "https://spore.fandom.com/wiki/Fiction:First_Cognatus_Empire?oldid=755836"
Community content is available under CC-BY-SA unless otherwise noted.