Sector within the Endless Space

“Far out in the uncharted backwaters of the First Gigaquadrant lies a small, populous and fertile sector. Known amongst those that inhabit as the Finduila Sector, home to many and ripe for the taking!”

The Finduila Sector, also known as the Provinciae Finduilica is a small sector within the void known as the Endless Space. Historically, the sector was rather isolated and thrived and was in relative peace until the arrival of the Galactic Empire of Cyrannus who conquered the native powers and began exploiting the fertile sector to provide food and water for the Imperial territories within the Cyrannus Galaxy.

The sector is home to humans, who once fled Earth but also to humanoids, non-humanoids and cyborgs species.

The Finduila Sector came into excistence with the creation of the Universe. Early records indicate the sector had space faring species as early of 549 in the humand calender. By 2100 the fleeing humans of the Kingdom of the Netherlands settle down in the Finduila Sector and become one of the major powers in the central areas. By 2500/400 BQF the sector recieves visitors from the Quadrant Galaxies known only to the natives of the Finduila Sector as the Crusaders of the Stars though they vanish around 2300/200 BQF when a race known as the Harvesters wipe out their colonial sector, destroy the wormhole to the Quadrants and fight the Dutch for another 80 years before leaving the Finduila Sector.

In the following years, new powers emerge yet their is mostly peace until 2804/06 AQF when the Galactic Empire of Cyrannus from the Cyrannus Galaxy arrives and conquers most of the central powers, raising the Legatus Finduilica as the dominent power under rule of the Rector provinciae, Schlimm Eklig Statthalter.

The Finduila Sector provides a diversity of planets and native inhabitants. Large area are devoted of life, like many sectors within the Endless Space. Though rather isolated from the rest of the First Gigaquadrant it does have active wormhole connection to the Quadrant Galaxies and the Cyrannus Galaxy. It also seemed to have housed the presence of the original Aldárae Order before it went defunct. 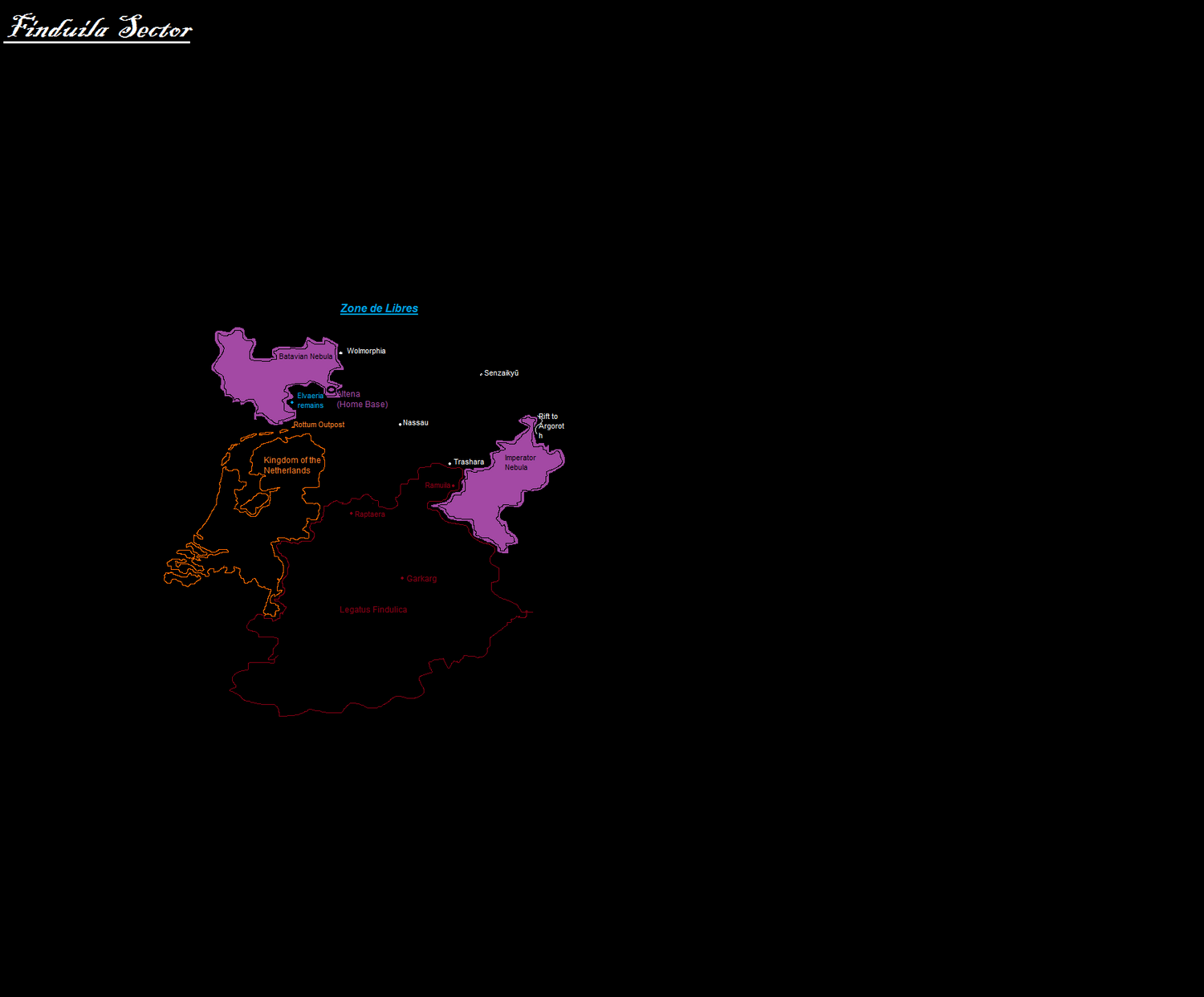 The Zone de Libres lies in the center of the Finduila Sector and houses various non-affiliated planets where various races live in rather harmony with each other. This can either be on fertile planets or on back water planets home to criminals and thugs.

Bordering the Zone de Libres in the north-west is the Kingdom of the Netherlands while south of that, south-west of the Zone lies the ever expanding Legatus Finduilica. Formerly the Dutch naval forces provided stability and inspections for the Zone but with them being placed under vassal by the Legatus, the Empire now rules over the Zone de Libres as well, though faces challenged to uphold order and peace in the area.

The sector houses a diversity of species, amongst them humans! The featured png files require the Dark Injection Mod and the CamBenColor Pack! The Png files are examples reflecting a possible appearance of their species. Planets like Nassau are considered welcome and open to all species and is often involved in criminal dealings.

Retrieved from "https://spore.fandom.com/wiki/Fiction:Finduila_Sector?oldid=740609"
Community content is available under CC-BY-SA unless otherwise noted.