Preservation and restoration of endangered and extinct Species

none, use plants as currency

Chaotic Good
“For the Collosus of Life, we hunt down the polluters!”


The Stalkers are spawns of Faz'ra, born from his eye clusters. They are the founding species of the Fernia Alliance, alongside the Runen. Due to them, the Fernia Alliance share an hivemind. They are known to be masters of scourge, using it healing, teleportation, offense, defence and many more... 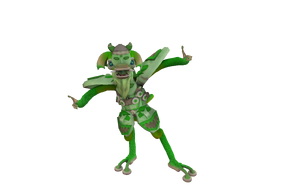 “We protect wildlife in our domain.”
One of the main species of the Fernia alliance of tribes. Like the stalkers, they are masters of the scourge, but to an lesser scale. They are also known to be deeply spiritual, and excellent spear users.


The Vargal are a race of semi-sentient, giant wolfs. They are used as mounts by the Runen, or as scouts. Unlike what many believe, they aren't pets, but coöperate with the Fernia Alliance willingly.


Giant Bats are flying units used by the Runen. They also serve as areal transport for both Runen and Vargals. They are not sapient, but are part of the Fernia Hivemind none the less. They cannot use the scourge, but unstead attack with a special sonic attack, with can changes the emotional state of the target if the Bat chooses to.

The Fernia Alliance of Tribes was formed when the Runen Tribes forged an alliance with the Stalker race, the children of Faz'ra. They protected the Fernia domain from harm. Recently, they have sended scouts to others parts of the Wester Forests and Tropical Lands, hoping to find new allies.

The races of the Fernia Aliance are very open to other cultures, and will gladly accept new species into their tribes. They prefer diplomacy above war. While they are mostly vegetarians, they are also keen hunters and snipers. They kill their prey quickly and without pain, believing that otherwise, Faz'ra will shun them (and he indeed does).

The Fernia Alliance of Tribes worship the colossus Faz'ra as the god of Life.

The main weapon of the Fernia alliance are spears. They are used for trowing, stabbing, and even cooking.

They understand nature and it's beauty.

We are sure plants rot here these step, so let the Hunting begin.