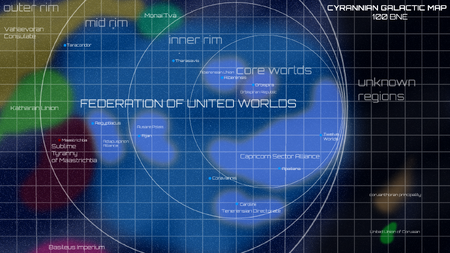 Predecessor to the United Republic of Cyrannus

The Federation of United Worlds was an interstellar union of civilisations styled as the galactic government of the Cyrannus Galaxy between 6000 BNE and 53 BNE. Born from an era of galactic disunity resultant from the fall of the First Republic, the Federation presided over an age of peace for the inner regions of Cyrannus, during which time civilisations such as the Capricorn Sector Alliance rose to the forefront of galactic politics. In contrast to successive governments, the United Republic, the Empire and the New Republic, member states exercised considerable internal autonomy.

Formed on Orbispira at the dawn of the fifth millennium prior to the establishment of the Empire, the impetus for the formation of the Federation is generally regarded to have been the Mid Rim Wars between the Sublime Tyranny of Maasthrictia and an alliance of worlds including Orbispira and Rijan. The Federation was variously regarded as both an important player in the continuation of galactic concordance and an ineffective hulk biased toward the interests of the often ravenous Core. While considered by most historians to be a galactic government, in reality, the Federation's borders aligned closely with modern boundary between the Mid and Outer Rims. Indeed, with the rise of the Libertus-dominated Capricorn Sector Alliance, the most powerful of the Federation's member states, the Federation began to fade into irrelevance. In 53 BNE, Chancellor Caelia Varo of Capricaerón—who had dedicated most of her eleven-decade political career to Federation reform—successfully introduced sweeping reforms to the Federation Congress, forging a unitary federal republic: the United Republic of Cyrannus.

Standing for millennia, the Federation is seen as the origin-point for the strength of the galactic governments which have since defined the modern history of Cyrannus. Indeed, the legacy of the Federation remains strong, particularly with the rise of the Reformist political faction of the New Republic Senate, members of which are often defined by their efforts to reform the Republic from a centralised government to a Federation-esque alliance of autonomous worlds.

“It may have been ineffectual, but times were simpler.”

“You should have died back then, things would be easier for me today...”

Retrieved from "https://spore.fandom.com/wiki/Fiction:Federation_of_United_Worlds?oldid=768971"
Community content is available under CC-BY-SA unless otherwise noted.