“Where was your bravery and smug sense of superiority when we gassed your people by the billions during your Great War? The Tralor people will never bow to your false Emperor any more than we will accept defeat this day!”

The Fall of Lanat Prime was a risky, though ultimately successful campaign by the Galactic Empire of Cyrannus to exert more control over the Mirus Galaxy, aided in large part by rebel Tralor seeking to overthrow the current leadership of the United Lanat Empire. In the two Cyrannian standard years since the signing of the Cyrannica-Tralo'aear Concordat, relations between the Galactic Empire and the United Lanat Empire have remained relatively stable, bolstered by Imperial intervention in many of the rebel campaigns against Lanat dominance in the Mirus Galaxy. However, little that was planned to come of the Concordat actually came about, replaced by political suspicion and warfare in the outer reaches of the galaxy away from the central territories surrounding the Galactic Core and the ULE capital of Lanat Prime.

With the ULE becoming increasingly isolationist, Captain Tector Decimius decided to approach the highest tiers of the Imperial hierarchy in the hopes that a new future could be decided between the two powers, one in which the existing ULE would be more amenable to Imperial demands. After much deliberation, the Emperor agreed to condone the risky mission, though doubted that all of its lofty goals could be successfully brought about. Nevertheless, the Fall of Lanat Prime would be remembered as a turning point in the history of both the Lanat Empire and the Mirus Galaxy as a whole. 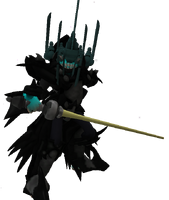 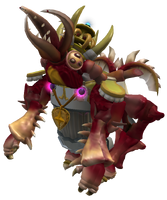 Emperor Aoblix: Emperor of the ULE 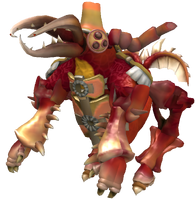 Infiltration and a Powerful AllyEdit

Over the next several weeks, the Empire would begin to infiltrate the inner levels of the United Lanat Empire's political hierarchy, a task which would prove to be tediously slow by Decimius' standards, who grew frustrated with the natural level of suspicion that Tralor often feel toward strangers. Nevertheless, slowly but surely more individuals within the deep recesses of the Lanat Empire began to slow signs of amenability to a possible regime change. However, there also existed potentially troublesome individuals loyal to Emperor Aoblix, many of whom came close to repealing the Empire's dark plot only to be silenced by agents of the newly formed Imperial Inquisition. On the bridge of the newly christened Praetorian-class Star Destroyer Chimaera, Captain Tector Decimius stood waiting as the void of hyperspace surrouded his bridge. Suddenly, a dark figure clad in black armour emerged from the doors located at the aft of the bridge. Briefly looking behind himself before again turning to the window, Decimius greeted the new arrival.

Inquisitor Chi Chodecra nodded in acknowledgement before striding to the window in front of Decimius. The captain was not fond of this new addition to the mission, suspicious of the motives of this new agent of the Emperor, who was on leave from his assignment in the Rambo Nation protectorate.

The dark Inquisitor began quietly laughing to himself, to the discomfort of those on the bridge.

Bursting out of hyperspace, the Chimaera held position behind one of Lanat Prime's moons only to be surrounded by ULE warships. As Decimius smirked deviously, the cackling voice of the Tralor commander burst through the bridge of the Star Destroyer.

Before Decimius could respond, the Tralor commander cut off the communication and fired on the Chimaera, which reflected the first barrage with its powerful shields. Turning to face the Lanat-class Destroyer, the Chimaera unleashed its rapid-fire superlasers, which bypassed the shields of the smaller vessel and annihilated with the intensity of a thousand suns. With unspoken glee, Decimius ordered the Chimaera to approach Lanat Prime, his eyes fixed on the large ULE defense fleet in fixed orbit around their homeworld. Despite the power of the Chimaera, the odds were tipped in the ULE's favour. Suddenly, with a simple gesture of his hand, Decimius gave the order.

One by one, dozens of Imperial Star Destroyers of various designs dropped out of hyperspace, forming a massive line of the Empire's top ships around Decimius' flagship. The two fleets faced each other for one, intense minute, before Decimius gave the order to fire. Lances of green turbo- and superlaser fire emerged from the Imperial fleet, which impacted against the opposite fleet under Emperor Aoblix's command. The battle began to tip in the ULE's favour, before another fleet dropped into normal space behind the Imperial fleet. To the delight of the ULE fleet, it was another armada under the control of their kind, but it soon became obvious that it was not friendly to the Emperor.

A transmission was sent to the loyal Tralor fleet from Nekroch., who spoke of Aoblix's crimes against the Tralor people and his rightful place as Emperor of the United Lanat Empire. When the transmission ended, several ships in the loyalist fleet turned on their allies and began fighting on behalf of the Imperials and Nekroch's forces, while on the planet's surface, many citizens loyal to the regime of old turned against the planet's authorities. Lanat Prime quickly descended into chaos, with Aoblix ordering all troublemakers and traitors to be sent to the nearest detention camp to await torture and execution. However, within the next few hours it became clear who the victors of the conflict would be. Orbit over the planet was clogged with the wreckage of ships from both sides, though unfortunately for Aoblix, the battle did not result in his victory over the interloper and his Imperial supporters.

Within the next two days, orbit over Lanat Prime was successfully under Imperial control, with ground forces engaged in lengthy assaults on pro-Aoblix cities and fortresses across the planet. Within the week, Emperor Aoblix's forces were routed by constant attacks by both Imperials and those loyal to Nekroch. Touching down near the besieged Imperial Palace, Captain Tector Decimius, Inquisitor Chi Chodecra and Nekroch, accompanied by a large Imperial legion managed to burst their way through the palace doors and confront the last of Aoblix's supporters. His energy sword ignited, the Inquisitor demanded the surrender of the guards protecting the Emperor, who roared in defiance as a firefight broke out. Charging forward with all their fury, Aoblix's guards cut down many Imperials before finally falling to a combination of Decimius' accuracy with an Imperial carbine and the Inquisitor's skills with a sword. Finally, the Imperials had surrounded Emperor Aoblix, now seething in a cold rage enough to send chills down the spine of even Captain Decimius.

Reaching into his pocket, the Inquisitor placed a holographic device directly in front of Aoblix. To the surprise of even the Imperials in the throne room, a holographic image of Galactic Emperor Tyrómairon himself appeared. Speaking with a voice as cold and dangerous as the empty void, the Emperor of Cyrannus scrutinised his Tralor counterpart.

Defiantly, Aoblix spat at the hologram. With a gesture of its incorporeal hand, Tyrómairon's hologram knocked Aoblix to the floor. Those in the room were clearly stunned that the Emperor could muster such power even while tens of millions of light years away in the Cyrannus Galaxy.

Raising his hand, Emperor Tyrómairon lifted Aoblix a full two metres above the ground. As Decimius and Nekroch watched with widened and fearful eyes, Aoblix attempted to release himself from the Galactic Emperor's invisible stranglehold over his throat.

His holographic arm outstretched, Tyrómairon flicked his wrist, audibly snapping Aoblix's neck. As the fallen emperor's lifeless body slumped to the floor, Tyrómairon's hologram turned to face the Inquistor and Decimius. Both Chodecra and Decimius sank to one knee deferentially.

Nekroch's eyes were full of fear as he stared at the lifless body of Aoblix. Composing himself, he stepped forward and cleared his throat.

Ignoring Nekroch as he genuflected, the Emperor once again tuned his attention to Decimius and the Inquisitor.

As the hologram dissipated, Nekroch ordered his personal security detail to remove Aoblix's corpse from the room. Taking his seat on the throne, Nekroch sent out a transmission to all Lanat military personnel, declaring the end of Aoblix's rule and the beginning of a new age of prosperity and conquest for Tralor kind. Hailing the Empire as saviours from Aoblix's corrupt and ineffective rule, Nekroch claimed that any individual who attempts to damage to Imperial holdings would be executed. All across the Lanat Empire, news of the events at Lanat Prime spread quickly garnering a mixed response from those who listened.

Though a minority claimed that Nekroch's rule would bring about a new era of glory for the Tralor species, others claimed that he was an Imperial puppet without honour and would therefore face the fury of those truly loyal. Despite these opinions, Nekroch would soon sign a treaty with the Empire which ostensibly began a new relationship between them but in actuality placed the Lanat Empie as a protectorate of the Greater Cyrannian Empire. Reaction to this turn of events was even more controversial, with Tralor War Hero Tul and his followers claiming that the treaty was illegitimate. Regardless of these opinions however, the Fall of Lanat Prime would be considered a turning point in the history of the Mirus Galaxy an would ultimately set about a series of events which would forever change the face of the United Lanat Empire...

Retrieved from "https://spore.fandom.com/wiki/Fiction:Fall_of_Lanat_Prime?oldid=680919"
Community content is available under CC-BY-SA unless otherwise noted.