Various
“Gods who create gods. And even these gods have gods.”

The beings known as Essentials, also known as Fundamentals, Ethereals and rarely Omnipotents are various races of creatures who were born from the various Essences existing in the universe. In a contrast to their technological counterparts, the Ultraterrestrials, the Essentials did not evolve from regular races and then achieved technological ascension. The Essentials instead were created at full power by a number of different Essence godforms.

Similar to the Ultraterrestrials, the Essentials usually see themselves as above "mortal" races and tend to ignore them. However, some races have shown benevolent relations with mortals, and others have shown a great desire to destroy all life in reality. The Essentials are, unlike the Ultraterrestrials, rarely united and tend to fight each other frequently.

“Ordered existence is the sweetest lie. When the confines of your reality shatter and tear away, what will you do when the Emerald Sea is all that stands before you?”

The Khi'anriax, also known by the name Heirax, are a race of generally formless and immense beings that serve as the Essentials of Aberric Energy. The Heirax have a considerable disdain for much of the Gigaquadrant - their one desire is to see it all brought down and dragged into Marrow to merge and become one with the Plane of Chaos. The Heirax have tormented and enacted galaxy-wide slaughters and genocides in the Eupherion Galaxy for hundreds of millions of years, and have only been rarely witnessed in the wider Gigaquadrant. The Heirax are the creators of the Ozax demons, using them as proxies to invade other planes of existence.

The Heirax had no solid form in their true form - and as 8th dimensional beings, their true forms were often incomprehensible and could not cross over from Chaos into reality. The Heirax were, nonetheless, horrifying to behold - they rarely manifested in a humanoid form unless to their servants, and their forms were capable of driving those that view the Heirax insane the moment their eyes were laid on the being. Their visage has been depicted in millions of cults throughout the time they have tormented Eupherion, and their influence has put the galaxy in political danger multiple times. 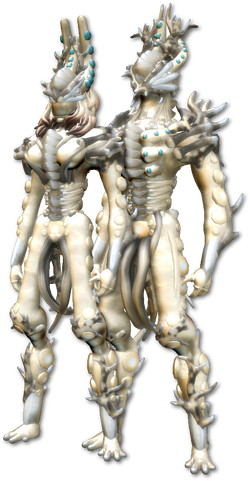 “We are the front line in the war against the wrong, the perverse, the demonic and the wicked.”

The Obvia'Atra, also known by the name Ravenrii, were a race of beings who served as the Essentials associated with Celestial Energy. Self-proclaimed defenders of the omniverse, much of their existence was based on combating the forces of the Samut'angar, believing them to be a blight on reality which could not be allowed to exist, while occasionally communing with mortals for various reasons, often to give them guidance when they most needed it.

The Obvia'Atra were utterly dedicated to the eradication of what they believed was evil or wrong, though they were not unreasonable - they chased down Essentials associated with darkness, but rarely went out of their way to attack mortalkind. In fact, those who had contact with the entities described them as honourable, knightly paragons who saw mortal life as their greatest treasure; a treasure which required their utmost attention and protection. The Obvia'Atra and all related to them were eventually exterminated by Angazhar during the Third Xhodocto War, bringing an end to their constant vigil against the darkness. 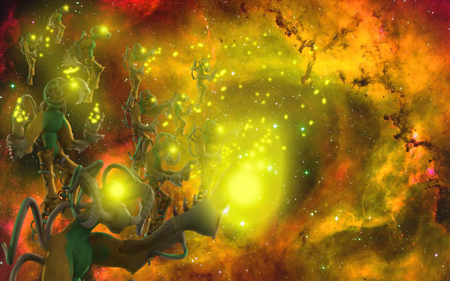 “All things are temporary. But it is because they are temporary that they must be allowed to prosper and endure.”

The Vyro'Narza, or the Taldar, are a benevolent fifth dimensional race of beings responsible for the maintenance of time. Being created by the goddess of time, Vyro'Nazdea, their souls originally came from the late Taldar Empire, who were overzealous in their use of time travel, and when they broke the spacetime continuum, were punished. The Vyro'Narza are affiliated with the Vi'Navitum, as Vyro'Nazdea is considered Vi'Naherza's sister, and the two notably fought together in the War of the Ancients, which caused the Taldar to go into hiding for millions of years.

Functioning as the controllers and maintainers of time, it is their role to ensure it flows smoothly and correctly, ironing out any potential errors and preventing or solving the infamous time anomalies. Their work is shared with that of the Vyro'Ralza, who are responsible for the destruction of perpetrators and for eliminating anomalous and useless timelines. The Vyro'Ralza, however, are servants of the Xhodocto, unlike the Taldar who oppose them. The Taldar are often noted for being the friendliest towards mortals of the godraces, and being the most sympathetic, largely an extension of Vyro'Nazdea's personality but also because they were once three dimensional mortals themselves. The Vyro'Narza are all a group mind, and operate better with multiple together. 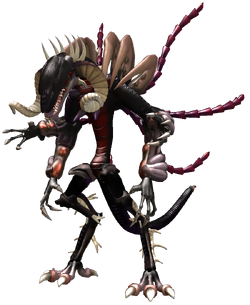 “We care not for your opinion on this matter. This rift is anomalous, and will be eliminated. Stand aside, or we will destroy you with it.”

The Vyro'Ralza, known commonly as the Traffphyds or by some (crudely) as the Dark Taldar, are a 5th dimensional race of beings associated with the Dark branch of Chronoscopic energy. Created in one timeline of the Second Borealis Galactic War, out of the souls of the Unified Nation of Ottzello by Vyro'Ralzora - or Zargoth - they are affiliated mostly with the Dominion of the Xhodocto, with a minority working for the Taldar.

Responsible for the annihilation of time anomalies, the Vyro'Ralza are the more aggressive brand of Vyro'Narza. Unlike their Narza counterparts, who are sympathetic and friendly towards mortals, the Ralza show almost complete disregard for them, and as an extension of their god's personality, are next to emotionless. Similar to the Vyro'Narza, the Vyro'Ralza are a group mind, however many other godraces have stated that they have so little individual thought that they may as well be a hive mind. 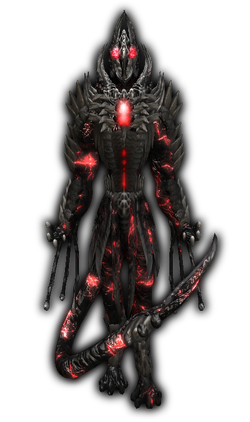 “Your sorrows are naught. Biological functions - naught. We hunger, and we are fed by your lives. And so you must die.”

The Xi'Arazulha are the mirror counterparts of the Vi'Navitum, created by Angazhar after splitting their energies in two. Their deity, Maktanshatin is the polar opposite of Vi'Naherza. For numerous years, the Xi'Arazulha have opposed the existence of the Vi'Navitum and have loosely served Angazhar, eventually resulting in numerous wars across the universe and on mortal planets. The Xi'Arazulha are a malevolent race, wishing the death of all mortal and immortal life to sustain their power. Their physical powers are based upon the cessation of life, the draining of energy and the corruption of the mind. Alongside the Vi'Navitum, the Xi'Arazulha have biological descendants that are demigods. 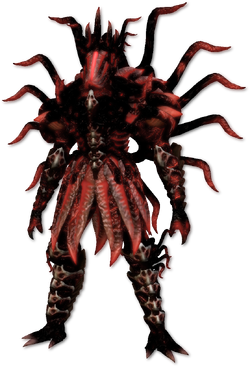 “The edifice of creation will be unmade; stars will wither and shatter in our wake.”

The Ayrai'Shikua are the dominant race of the Samut'angar and the Essentials of Demonic Energy. 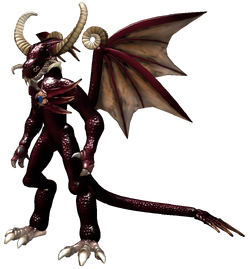 “Through our command, sin is null.”

The Aichatharna were an ancient race of Essence-borne beings who once ruled the universe of the Zazane. The servants of the powerful god known as Vaxal Myraad, the Aichatharna possessed but one goal, that being to spread their unique power across the omniverse, using the Zazane as means for extrauniversal travel for they were otherwise bound to their native universe.

The Aichatharna were the uncontested masters of their domain, seeding their universe with life for the purpose of developing and evolving the perfect means to escape their universe and propagate their essence through reality. However, before their prime species - the Zazane - reached the necessary level of technological advancement, the Aichatharna were wiped out by the actions of a group of five siblings collectively known as the Accursed Quinquennium, who in an attempt to rebel against Vaxal Myraad, devoured all other Aichatharna and absorbed their souls into their own, forever corrupting Descension Energy into a destructive, near-demonic essence.

“We are the watchers from beyond the dreams.”

The Alavahraa, most known as Thoi'olerthae are a species of Essentials native of the alternate plane known as the Realm of Dreams. The archetype race of the Essence known as Dream Energy, the Thoi'olerthae are dedicated to an eternal role of pleasuring mortalkind through pleasant dreams and sometimes physical contact, given to them by their creator deity Sonhadromerith.

The Thoi'olerthae are a benevolent race of Essence beings who are eager to aid mortals in their conflicts, especially when they involve combating other dark Essentials who may threaten reality. The feud between them and their dark counterparts, the Shu'olerthae, dates from nine billion years and counting, and thanks to them having no concept of time, their war has essentially been going for an eternity as far as they are concerned. Thoi'olerthae sightings in the Onuris Universe used to be rare, but they have become a somewhat common occurrence following the most recent demon insurrections. 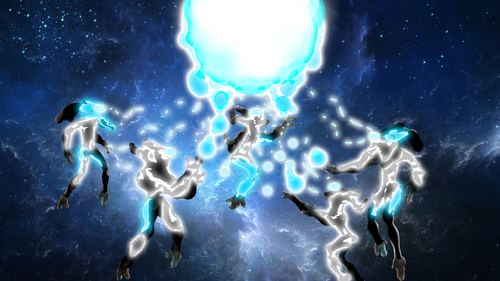 “An abundance of corruption in this reality. It is time to cleanse.”

The Vi'Navitum or Verezaph are a 9th dimensional race for the responsibility of the continuity that is the course of life itself. Being guardians of the Vi'Navitum god Vi'Naherza, their sole purpose in existence is to extinguish all corruption from mortal souls. Their existence has come close to utter annihilation on numerous occasions from the Xhodocto; in conjunction with the Vyro'Narza, the Vi'Navitum have held an extradimensional front against the Xhodocto for billions upon billions of years. The eventual defeat of the Xhodocto meant the entrapment of their race in Erratsactum, a prison and the realm of the Vi'Navitum. Upon breaking free, the Vi'Navitum came to condemn this reality.

Despite their benevolent appearance, the Vi'Navitum verge upon evil due to their extremity in the destruction of corruption. They are mostly apathetic towards this reality due to their heavy involvement with the Xhodocto, and would much rather see this universe totally cleansed by their hand rather than anything else. Alongside the Xi'Arazulha, the Vi'Navitum are the only god race to have biological demigod descendants. 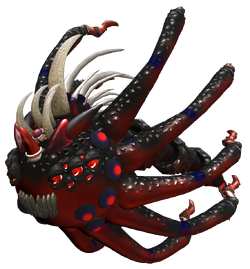 The Shu'olerthae are the most primal species of Corruptus Demon and the Essential race of Nightmare Energy. Created from splinters of Shu'rimrodir's energies which developed life of their own, they are the most numerous race of nightmare in the Corruptus and are generally considered its most important species. All attacks launched by the Corruptus are sure to involve these malevolent creatures, who will use all in their power to cause as much mayhem and destruction as they can in order to feed on the vital energies of their victims.

“We exist to preserve the Universe”

The Iluvii is a term used to generalize over the distinctive forms of essentials, each different in terms of power and function, that roam the Iluvii Realm and interact with the denizens of the universe on a common basis. The Iluvii are perhaps the most active essential species there is in the First Gigaquadrant, with the exception of lesser demonic entities and Chaos Lords. Most of them work peacefully with mortals, guiding them to be a force of good and balance, while many more stand strong against the numerous interdimensional and supernatural forces. The Iluvii are central figures within the tenets of Iluviism, regarded as guardian spirits, protectors, and guides to spiritual awakening. As such, they are assembled within the vast array of holy figures in the Iluvii Pantheon. Whether they are worshipped, admired, used as examples, or outright ignored by the denizens of the universe, the Iluvii continue their ongoing mandate to fend off the demonic influence of Chaos.

The Krassio are largely considered to be the most powerful psionic users, beyond the might of the Iluvii spirits naturally born in the psychic realm, they are a nascent new form of essential, designed to bring ultimate balance to the universe once their psionic might is fully awakened.

“Some call the Essentials gods. Some call them a race of those above mortal kind, yet not gods. They're both right. But one thing is certain, there are those whom aid mortals. And those who must be opposed for the continuation of existence as it is known.”