< Fiction:Essence
Edit
This was completely created, imagined and developed by The Valader, and it's for fictional use; don't misjudge The Valader's version with the real psychic term.

The Psionic Energy, also called Psionic Essence, along with its variant—the Pharia Essence—is the most prominent type of Essence in the Universe. Seen by most of species to be the easiest path of initiation to possess supernatural powers or mutations, to hold balance, to attain control of their full mental capabilities. Part of its popularity rests in the psionic energy's undeniable efficiency Chaos-related essences, but particularly against its polar opposite: Demonic Energy. As such, its practice and use are often considered as an anathema by the forces of Chaos in general, since psionic energies will always structure and train the erratic pathways of the mind, giving it focus and the ability to invade with its influence the physical plain, thus, it may be the greatest and most effective essence aligned with the universal concept of Order, which opposes that of Chaos. Despite this, there are concepts undeniably chaotic within the principles of the essence's existence like the parallel universe called Iluvii Realm, which is tampered greatly by the whims of gods and powerful entities, the so-called Iluvii. Nevertheless, the power psionic essence provides to the user is undeniable, and its mutations, universally called "Augments", are seen as a blessing rather than a curse.

Psionic energy refers to the mechanical and applied concepts of the metaphysical forces projected and manipulated through the mind. It is widely studied and observed throughout the universe in many ways, making it the most prominent mystical force in every galaxy, as many species inadvertently use it to manipulate other types of essences. It is also the object of religion, as psionic godforms manifest their will across the stars, some civilizations interpret it in a religious way, offering their devotion and faith towards these entities or the mystic aspects of psionic energy. Regardless of its subjective perception by users, psionic energy is recognized as an intrinsic force that constantly affects the laws of nature, bending them and recreating them in their own image. All religious doctrines ever created to worship the Essence and its gods are aligned within the parameters of what is universally called Iluviism.

It is a concept only known for civilizations who have adapted psionic energy as their preferred technological process, the theory behind Neural Physics states that psionic energy is able to replicate physical feats bound to the laws of nature in the present universe. It is a science founded with psionic essence as a principle. Psionic energy cannot be found in material properties other than the conceptual process of one's mind or in the psionic realm of Iluvii, thus it depends largely on an individual's power to breach the veil between both universes. The process is completely spiritual at first, where the user becomes a channel for psionic energies to pierce through, which requires not only a surmount capability to concentrate, but also an exact knowledge of the physical aspects they seek to apply. With this, psionic masters are able to manifest hard light constructs due to this principle, such as beam swords and weapons that can very well have a similar effect to more natural constructs of other species, even to greater extents. With this, specialist psionic users can create faster than light travel (many devices developed for this draw from the enigmatic technology of the Krassio), energy shielding for their ships, and even weapons so destructive that for more primitive societies it would look like the wrath of gods incarnate.

Iluviism is a neologism used to refer to the religious and mystical views surrounding psionic energy, beings entirely composed of them, and users who have mastered what is called the Psionic Arts. Iluviism is particularly centered, yet it's not limited to, the worship of the celestial beings that master the Iluvii realm, called the Iluvii Pantheon, where many dogmas and liturgies are created in what civilizations perceive as "pleasing their gods". On many more occasions, however, Iluviist practitioners also use it as a ground for personal improvement, and they may or may not actually worship the Pantheon, albeit they must learn to respect it.

Like all other essences in the universe, psionic energy begins to affect the user the more they use it, and if said practitioner were to tap into the ocean of the Iluvii Realm's mass mind, then that effect—also called mutation by detractors—is amplified even more. Psionic power and blessings bestowed to mortals through their devotion to the essence are transmitted too to offspring, meaning that second and third generations of a family will receive greater boons from the essence if the latter is continued to be practiced or exposition is continuous. Such is the case of the cryptic Chandras Galaxy, where psionic energy runs in the galaxy's veins and its spirits are allowed into realspace more freely than in other parts of the universe. Such is the imbuing of psionic essence into this galactic body, that its denizens of the third and fourth generations begin to show a permanent effect; energy begins to gleam in parts of their body, particularly their eyes, something Chandrans have called "The Glow".

Hereafter lies a list of powers and augmentations, divided in the concepts of those which are attained through voluntary tapping energy from psionic essence and using it, and the boons one might receive from it, either by birth or by continuous exposure. 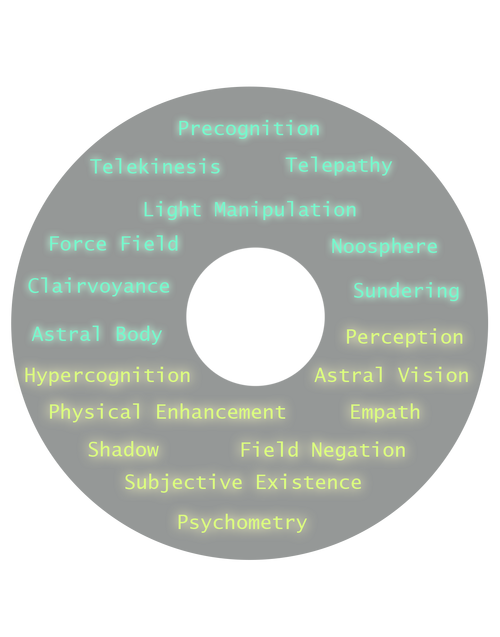 Powers are abilities obtained through the hardships of dicispline and training. Power is not for sale, nor it is come freely according to the tenets of the Book of Discipline, although power can also be given by communing with an entity with enough essence to provide it, something that is only reserved to those called gods among psionic users. These powers come in all kinds of forms, directly proportionate to the being or creature's mind and actual level of psionic essence usage.

Contrary to powers, which are granted and 'unlocked' through training and study, the augments are direct genetic mutations that change physical perceptions. Despite the mind being the sole organ to be affected by these mutations, it directly affects its perception and functionality with the rest of the body. As result, the modifications it causes are normally a hidden talent that a user can draw either voluntarily or involuntarily. People who are blessed with these innate abilities are normally those also blessed with "The Glow", a common trait in Chandras, but on the contrary, those who are blessed with "the Glow" are not always blessed with an augment. As such, augments are a rarety, but a welcome one notheless. Small communities rejoice at the coming of a migrant augment, as their gifts are often more than useful.

Beyond the bestowal of augments or the adquisition of powers through exposure to psionic energy, there is a gateway towards a myriad of possibilities and a power unfathomable by the narrow-minded found through the fruits of one's discipline and mastery of essence. This martial disicpline, from which several more pacifist venues have been developed, is known as the Kum-galam, translated roughly to Elder Discipline, Elder Starway as a conceptual variant, and coloquially as Psionic Arts across the cosmos. The Kum-galam is the drawn martial philosophy from the Book of Discipline written by the Civatron warrior called the Valader.

The entirey philosophical ideals of Psionic Essence can be divided in two. Psionic energy is, in its entirety, an Essence inherently aligned with the concept of Order, meaning that it is fundamentally opposed to the designs and nature of Chaos itself, regardless of its own chaotic tendencies when learning how to control it. However, in its search for Order, there are different venues psionic users might pursue, commonly known as Light and Dark Psionics, which are derived by either their sefless or selfish ideology.

“If psionic energy is a mind finding its equilibrium, then demonic energy is anathema to that very concept, you are never in control, an alien, vicious and destructive force invades your consciousness. It is something that we must eradicate from the face of the universe at all cost. Never hesitate, my young students, to finish the demonic presence in the spot, never—ever—hesitate, lest you will pay with your life.”


It is largely speculated, due to the nature of Chaos itself, that Demonic energy has existed since before the concept of time. It stood as a force unchallenged and unparalleled across existence, for any universe that it touched it devastated with utter cruelty and violence. The fact that Psionic Energy effectively counters demonics and viceversa is the subject of much debate among scholars, who speculate that the universe's spawning of an order-aligned essence to combat demonic energy is proof that their struggle is the manifestation of higher powers at play—a living, breathing, beating universe desperately pushing back forces that seek to effectively leave nothing but cosmic motes of dust.

As such, psionic and demonic energies have had a violent history since they both began to clash. The infamous War of Ages is depicted as a definitive class between both forces. It was thanks to this great war that the practice of psionic energy was scattered to many galactic communities across the universe, and although other essences of the order or chaos types eventually joined the battle for the soul of the universe, it remained, at a fundamental level, a battle of the psionic hosts against the demonic hordes.

Psionic Energy is open to any user to use it for their own fiction, although it is owned by The Valader, so make sure to notify him. Additionally, there are a few rules that need to be followed: