My creations deserve a better purpose.

“Devil. Madman. Lunatic. Destroyer. I can go on. But now he insists he wants to make up for it. I'll only believe it when he spends his entire life in penitence.”

Errr Krrarrr Lerciannn is a famous Ermitant scientist who notable for being the original creator of the Marinox. An extremely intelligent individual who was far ahead of his time during his early days, his power-hungry and megalomaniac attitude eventually led to him turning to the darkness as he tormented numerous worlds with his creations, which ranged from mere robots to even demons. However, as of now, he serves in the Indoctrinate Collective and hopes to redeem himself for his crimes.

The Ermitant with the most powerful mind in history, Errr's intellect cannot be ignored for his inventions were considered near miraculous by the old Ermitant Empire. While he attempted to conquer the Milky Way and once sided with demons to do so, he has since developed regret for his actions after he was defeated by the galaxy, and today he lives in penitence, hoping that one day he will be forgiven and hopefully forgotten of all the destruction he caused.

Errr was the most important scientist of the Ermitant civilization, as well as being the president's vizier back in the old Ermitant Empire over 600 years in the past. However, Errr had his own ambitions. He wanted to rule the world, and started to create biomechanical minions in secret. These minions were known as Errrbots. Errr eventually had an encounter with the Grox Meta-Empire, who wanted to use the Ermitant's vast intelligence in their own plans. The Grox improved the Errrbots' initial blueprints, and infused their DNA in Errr's body, giving him biological immortality. Soon, the Ermitant's world was raided with robots, the president was deposed, and the Mad Scientist ruled as he always wanted.

However, the military eventually organized itself, defeated the Errrbots and fought Errr by manipulating his short temper. Badly hurt, he was rescued by a Grox ship and taken to the Galactic Core of the Milky Way Galaxy to serve the Grox there.

As he recovered from his wounds, the Grox found a crashed ship containing the Marinar, and then sent orders to Err to turn them into slaves. The result was the Marinox Empire, who caused destruction and terror in the galaxy for years. One of these victims was a neutral-aligned space station which served as Herquie's home. The station's destruction caused Herquie to chase Errr down, trying to kill him several times. Errr and Herquie soon became worst enemies. During this time, Errr also created links with the Cyrannian Neraida, resulting in the creation of the Cyrannian Marinox.

Unfortunately for Errr, the Marinox's life generator was destroyed, causing his creations to die. Trying to secure the generator, he was caught in the explosion, resulting in many empires believing him to be dead. However, Errr survived the incident, having his face disfigurated by the explosion of the Generator. He hid himself in a distant, desolate planet to go on with his experiments.

Hundreds of years later, Errr would resurface after being contacted by the demon Arrtkar Crowart, who convinced the scientist to join the Corruptus and act as a host body for the demonic god Shu'rimrodir in exchange of great power after he showed him the Marinoxidiz. Errr became the apparent mastermind of the Second War of Black Fog, leading over the Marinoxidiz and controlling the actions of the Dark Five and the Loron'Kikra. His quest for conquest led to him to return to Cyrannus and take Puria over once again, though he retreated from it after Okastana was destroyed by the united Republic of Cyrannus.

Errr remained a consistent threat through the war, though the eventual downfall of the Corruptus due to the efforts of the Dracogonarious Empire and their allies made the Ermitant slowly lose his mind once again, helped by the fact he was being consumed by Shu'rimrodir's own hatred for the universe. Errr eventually lost all of his sanity once the Corruptus headquarters of Primorgius was invaded, leading to him to use his powers to temporarily eradicate the Thoi'olerthae and then personally face the Dracogonarious in combat, but in the end, he was killed by Herquie and his body burned to a crisp, becoming a portal to the Nightmare Region.

Errr's soul was sent to Inferno where he was turned into a misshapen monstrosity continuously tortured by the denizens of the realm. However, he was eventually taken away by Thea'Nhirara and reverted back to his Ermitant form, and the angel ordered him to redeem himself by now working under the Dracogonarious' guidance. As of today, Errr works at the Collective xenoscience bastion of Nova Gheralvoz, having acquired a high ranking position and serving under the immediate command of Tarygan Tersly. He has since become widely acclaimed for his great positive achievements, including being one of the head scientists behind Project Exodus.

Errr is widely noted for wearing a mask which covers the entirely of his face. When he was defeated by Captain Drakley during the Marinox War, the former slashed the Ermitant's face with his sword and left a large gaping wound, which Errr treated by hiding it under the mask. Afterwards, when he was used as Shu'rimrodir's host body, the wound reopened and grew many rows of teeth, acting as a second mouth and jaws for the demonic Ermitant. Following his resurrection by Thea'Nhirara, the wound has been permanently closed though a large scar still goes from Errr's forehead to his chin, and while he could easily remove it through surgery, he chooses to wear his mask and keep his scar as a form of atonement.

Errr has always been described as obsessed with technology since an young age, always hoping to be the greatest scientist of his people. However, he was also known for being a megalomaniac and filled with hunger for power, which ultimately led him to ensue the Robotic Uprising and later create the Marinox. Errr was not above delivering his soul to the forces of Inferno just for the opportunity of becoming more powerful and have the chance of finally destroying his foes, though this in the end proved to be his undoing as his rage made him blind to his own flaws.

Errr currently works for the Indoctrinate Collective as a way of asking for the forgiveness of the Dracogonarious people. He shows genuine, fatherly love for his creations, no matter how small they may be, and is also known for his explosive temper, which greatly damages his skill as a ruler or leader. Appearance-wise, Errr has sharp features due to having Grox genetic material in his body and he tends to keep his large ears hidden inside his hair.

“We work together to accomplish our goals.”

“I see no other option but your destruction!”

Errr's appearance during the Second War of Black Fog 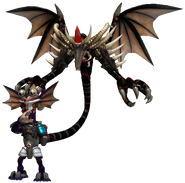 Errr with the Avatar of the Devourer 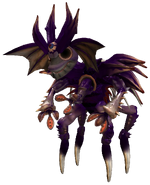 Errr as a deranged demon