The Endless Space, also known as the Void of Space, Intergalactic Rifts are the uncharted areas of space located between the galaxies of the First Gigaquadrant. Most of the space between the galaxies is a void of nothingness, though various areas are known to contain star systems and spacial clouds. T

hose areas that are known are mapped by the former Rambo Command and designated with certain Grids to identify their positions in lightyears from the Cyrandia Cluster.

The Argoroth Sector is an area of in the Endless Space, surrounded by an four-month barrier of "nothingness" that spans the north, east and southern parts. Only the south-west hold a corridor leading to the next sector, though is in sole possession of the feared and terrifying Mandabit. The barrier of nothingness forces the Argoroth Sector to be rather isolated. There are also some hidden and secret trade routes leading to other sectors, though all are located very close to the Mandabit Corridor. The sector is well known for its slavery, lawless nature and fight for survival and its Gorgorian Pleasure Houses. 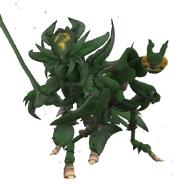 Perhaps one of the few, if not the only one, lawful sectors of the vast Endless Space, Beacon Sector is largely controlled by the Singularim Pact, hailing from the Chandras Galaxy. Although the Mandabits have raided the sector on numerous occasions, no attack has ever been powerful enough to cause any devastating damage to the Beacon Sector. It is called beacon due to its luminous nature. Since there is no gravitational pull in the Endless Cosmos, the Krauna devised, with the help of the Xol'Etra, several artifical stars that create enough gravitational pull for planets to orbit. This controlled phenomena has also attracted planetoids and space dust. Eventually, the reaction of exotic gases colliding against each other, native to the Endless Space, created the blue-ish nebula that embraces the majority of the sector.

The Civatrons are some of the most powerful beings in the whole Universe. They are not native to the Endless Space, but control a large portion of the Beacon Sector.
Add a photo to this gallery

The Finduila Sector, also known as the Provinciae Finduilica is a small sector within the void known as the Endless Space. Historically, the sector was rather isolated and thrived and was in relative peace until the arrival of the Galactic Empire of Cyrannus who conquered the native powers and began exploiting the fertile sector to provide food and water for the Imperial territories within the Cyrannus Galaxy.

The sector is home to humans, who once fled Earth but also to humanoids, non-humanoids and cyborgs species.

Void of Space between the Quadrant Galaxies

Main article: Space in Between

The Space in Between, also known as the Capacitas Inter or simply the Corridor, is a region located within the Endless Space of the Cyrandia Cluster, between the Cyrannus Galaxy and the Quadrant Galaxies. The Corridor is one of the three ways to enter the Quadrants while travelling from Cyrannus, and vice versa, harbouring one of the three wormholes linking the inhabited regions of Cyrandia.

A realm of mystery, it is often said of the Space in Between that the rules which govern Cyrannus and the Quadrants are not quite the same within the endless systems, which are often characterised by a strong connection to mysterious energies, magicks and forces unknown to those elsewhere in Cyrandia. This has attracted many scholars in the past, such as the sages of the first Aldárae Order, and the mystical elves, both of which sought to understand the mysteries of this unusual region of space.

The Carnthedain Elves are beautiful purple skinned race of humanoids, with strong connection to nature and magic. Driven from their homeworld upon its destruction by the notorious Galactic Empire of Cyrannus

The Half-Orcs were banished and exiled into unknown magical portals in ancient times, a small number found their way at Ozdudrahk and over time became a large population of hard working people within the Space in Between
Add a photo to this gallery

The Triffid Nebula (not to be confused with the region in the Milky Way Galaxy with an identical name) is a star-forming region which was once part of the Phradox Galaxy. Around 6-7 billion years ago, a smaller galaxy fell into the gravitational well of the Phradox Galaxy and was subsequently absorbed into the galaxy's larger mass. A huge quantity of debris from this collision formed the "Great Ecliptic", a ring of gas and dust that orbits the galactic center at a steep incline above the galactic plane.

The Triffid Nebula itself is one of the countless smaller dust clouds hurled away from the galaxy by the immense tidal forces of the galaxy's mass. It began forming stars around 5 billion years ago, and due to the nebula's richness in heavy elements, gave rise to numerous planetary systems. These systems are almost unreachable to the inhabitants of the rest of the Gigaquadrant, and may only be accessed by a network of wormholes that entangle the nebula with other massive bodies, such as galaxies.

The majority of the nebula is controlled by the Ecumene, a civilization native to one of the nebula's oldest stars, Arachosia. The Ecumene has half-heartedly colonized the other planetary systems in the region, but due to the abundance of traversable wormholes connecting the nebula to other regions, the comparatively expensive method of colonizing these stars has been largely left to those who are particularly wealthy, bold, and sufficiently bored.

Publicanos, home of the Triffids and capital of the Ecumene 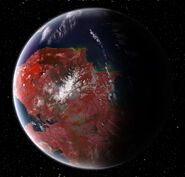 Phaethon, home of the Spartiates

Retrieved from "https://spore.fandom.com/wiki/Fiction:Endless_Space?oldid=858271"
Community content is available under CC-BY-SA unless otherwise noted.