Sector within the Endless Space

Historically, the sector is isolated and often considered the outlands where slavery is tolerated, internal strive is promoted and where all quiver in fear of the Harvesters. The sector is well known for its slavery, lawless nature and fight for survival and its Gorgorian Pleasure Houses.

The longest space faring civilization within the sector include the T'varuuh who explored most of their neighbouring nations. They discovered that the sector is surrounded by at least a four month barrier of "nothingness" that spans the north, east and southern parts. Only the south-west holds a corridor leading to the next sector, though borders the territories of the terrifying Mandabit and their Harvesters.

The Argoroth Sector was the point of relocation for the USS Elgorodaurl in 2802 (04 AQF)after being hit by an anomaly in Metruia Nebula of the Quadrants. More curious, it seems more relocations from the Cyrandia Cluster have occured in the Argoroth Sector in the past, including a fleet led by the Cogsangui Fleetlord N'thavo Xellunaion or in past times an expedition fleet of the Cargura.

The Arogorth Sector provides a diversity of planets and native inhabitants or migrated inhabitants that found themselves in the sector after relocations from the Cyrandia Cluster. Large areas are devoted of life, known to the natives as the Void of Nothingness. 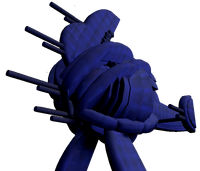 Most Png files require the Dark Injection and CamBenColor Pack

Retrieved from "https://spore.fandom.com/wiki/Fiction:Endless_Space/Argoroth_Sector?oldid=810386"
Community content is available under CC-BY-SA unless otherwise noted.