The Endless Host, in the name of the Outworld

Serenity Woods
Outbreaks all over Koldenwelt

The Endless Host, also known as the Serenity Empire or the Outworld (after their homeworld) is a kingdom of undead spirits which resides deep within the Serenity Woods. One of the most powerful dark forces on Koldenwelt, the Host once inhabited a distant, long destroyed realm of existence, one that is known as Outworld, but has been forced to abandon it, along with their bodies and mortality, in order to escape from the hellish creatures that threatened to destroy them. The sole imperative that drives these broken, heartless, bodiless creatures now is to bring their homeworld back, one way or another.

Possessing the bodies of their fallen foes, the Host's spirits' strength rises with every mortal they kill, with an every single tract of land they corrupt, with an every single soul they consume. No longer possessing such mortal emotions as mercy, fear or free will, the dreaded undead of the Outworld are silent, soulless, and indominable. Their ruler, Lich Lord Praetinnath - the very same mage that both saved and cursed his people - has but one goal: to recreate the ancient Serenity Empire atop the bones of the living.

While large portions of the Host's history are still unknown, the rotten, black scrolls and grimoires found in the Serenity Woods by those brave (or mad) enough to venture there have shed some light on it. According to what has been translated, the Endless Host's origins lie in the Serenity Empire, a magocratic realm that governed the Outworld since times immemorials. Believed to have been founded by the legendary Outworld Colossus of Order whom the Outworlders called Alar'xashan and revered as a god, the Empire was a duumvirate of some sort: while its armies were led by a hereditary monarch coming from the legendary Hadberash dynasty, the matters of politics were handled by the Council of Five Magisters. This division of power was mostly because of the Outworld's peculiar environment: being a major focus of magical energy, it allowed its sorcerers a greater deal of control of the Source (or rather, its umbral strain), but also gave birth to various chaotic creatures who threatened the people of the Outworld constantly. This balance of power, along with constant sacrifices made by the Outworlders to Alar'xashan in exchange for his divine energies, had maintained stability in the Outworld for twenty thousand years.

This stability was not destined to be eternal, however. As time passed, the chaos beasts became stronger, while the Serenity Empire's population slowly dwindled because of war, turning from a prosperous kingdom into a society of survivors, while Alar'xashan's thirst for blood grew stronger and stronger. The populace's attitude towards their god slowly turned from religious awe into disdain and hatred, especially among the higher classes: ultimately, this disdain and hatred culminated in the so-called Spring of Rejection. After a particularily harsh winter which took away a great portion of the remaining Outworlders, when the Colossus of Order appeared in the capital of the Serenity Empire to demand his due, the head of the Magister Council, Xercaanathen, rejected saying that there were no more subjects to sacrifice, and defied her god.

Alar'xashan was not amused. Unleashing his terrible wrath upon his former subjects, he wrought unspeakable destruction upon the lands of the Serenity Empire, killing thousands with his light magic and shattering the very earth. The survivors of the cataclysms gathered around one of the two remaining magisters, Praetinnath of Kali. Seeing no way to survive on the Outworld and stripped of their light magic powers, Praetinnath and other Outworld mages decided to delve into darker sorcery, and began a ritual, now known as the Great Curse, that would allow their race to freely move between the planes and find a way into another world. The ritual succeeded. No longer having any physical form of their own, the Outworld's inhabitants turned into ghosts, forever cursed to be trapped between life and death. But the Lich Lord Praetinnath, the ruler of the Outworld, did not consider the ritual a failure, for a path into Koldenwelt was indeed open now - and the Outworlders poured in there, using the bodies of the dead as their hosts. Relentless, emotions and feelings extinguished in their hearts, they have a single goal now: to reshape the new, strange land they found in the image of their own lost home. 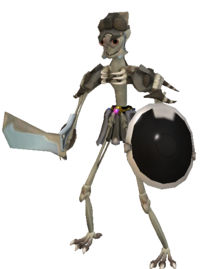 “There is no release. You shoot them, and arrows go right through their bones! You destroy one, and ten rise from the ground!”

In a place where the Outworld reigns, the dead can no longer find any salvation. Possessed by ancient, dark spirits of the Outworld, skeletons rise, and whether they create the mighty fortresses of the Serenity Empire or tear its enemies apart with their swords, they serve their master, Lich Lord Praetinnath, in all things. Knowing no fear or fatigue, the Outworld's undying soldiers represent the ultimate fate of all beings of Koldenwelt: death.

While weak alone, easily crushed by blunt weapons, magic and fire, skeleton warriors of the Outworld can never truly die, for the spirits inside them will always find new bones to possess. 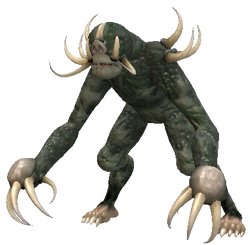 “Those who come to the woods... never come back the same.”

There is a tradition among the wild orcs of the taiga forests of the Frontier Land: some crimes are beyond all mortal punishment. Those who betray one's family, those who blaspheme, those who show cowardice in battle - all of them are called upyrs, the unforgivable. The only way their sins can be atoned is through wandering into the realm of death which lies to the east of the Frontier: the Serenity Woods. Most never return.

Those who return, however, often do so among the undead armies of the Outworld, transformed by the necrotic energies of the Woods into insane, gibbering beasts with but one emotion in their mind, all other feelings erased by shame and undeath: hatred. Not completely skeletal like the rest of its soldiers, upyrs are ravenous cannibals, seeking to enact their revenge against the living by feasting on their flesh and blood. 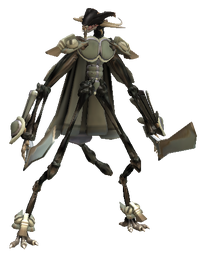 Not all of the dead who submit themselves to the Serenity Empire lose their souls and memories; among the skeletal armies of the Outworld, strange, royal figures walk sometimes, much unlike the lowly undead they command. Formerly mighty warriors, nobles and knights, those lordly figures somehow retain their memories and, to a certain point, personalities intact. But bear no false hope: whatever feelings they had towards the living are long since extinguished, replaced by unquestionable loyalty to the Serenity Empire.

Both respected and feared (if the living dead really have these feelings) by their Lich masters, these Necrolords are truly a bane of the living, ruthlessly conquering the lands they once protected. 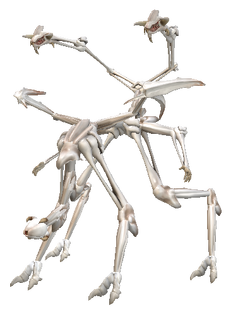 “What was it? I did not know, and neither do I know now. But when it came, it was over. All hope was lost.”

Little is known about the twisted constructs of the Outworld known as Bone Fiends. Some believe that they are the carcasses of various beasts that once roamed the Serenity Woods, while others think that they are chimeras made of those whose bones were broken beyond repair and thus insuitable for making normal skeleton warriors. One thing is certain: these towering, lumbering aberrations are one of the most powerful creatures in the undead's arsenal.

Having no sentience whatsoever and blindly following their masters, Bone Fiends are weapons of both convenient and psychological warfare, for their misshapen, abominable beasts are an affront to all things natural. To fight a Bone Fiend is to fight man's primal fears. 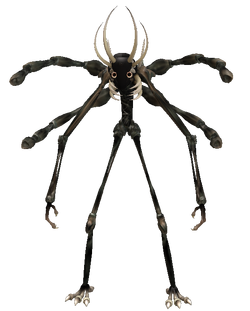 The Outworld was once ruled by the Magisters: sorcerous nobles whose power rested on their deep understanding of the Source. Some of them were wise philosopher-kings who ruled their people with respect, while others were power-mad tyrants bent on conquest and slaughter, but all of them shared one thing: they were all beings of godlike magical power. It was the Magisters' magic that ultimately both saved and cursed their race, and even now, on Koldenwelt, the Outworlders obey them, their rule stronger than ever.

Twisted by the undeath into something eldritch and insane, the Magisters, now called Liches, wield the power of necromancy against their foes, controlling the very circle of life and death the Outworlders have found themselves trapped in.

According to the information gathered from Outworld ruins fro Stripped of emotions and feelings by the Great Curse, the Serenity Empire is a twisted, hollow shell of what it once was. It has little society to speak of: the entire empire is devoted to a single purpose and can't be stopped or reasoned with. The cities in the Serenity Woods are considered to be an unsettling sight: hauntingly beautiful, nobody inhabits them, and yet the Lichs still order their slaves to create more and more of these ghost towns, for no purpose but the Lich Lords' crazed desire to bring the old times back.

The Serenity Empire is said to have a very advanced technology, roughly at the same level as the Koldenwelti Empire of Man; however, its advancement was greatly influenced by the Outworlders' knowledge of the Source, meaning that the materials the undead use are mostly magical in origin - usually, the bones of the dead are enchanted in one way or another. 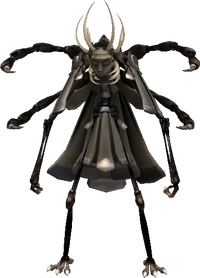 “There is purity in death.”

Praetinnath, also known as Praetanath, was once his race's greatest prodigy, perhaps the most skilled Magister in the entire Outworld, and now the Serenity Empire's enigmatic leader. Residing deep in the Serenity Woods, atop a throne of bones, Praetinnath observes Koldenwelt, plotting his next move. His goals are unknown, his purpose unclear, but it is known for sure that his sorcerous powers are a threat to the entire world. 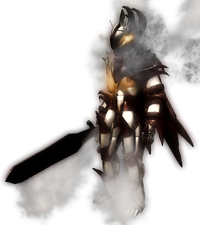 “I'm coming for your skin!”

Necrolord Kimorgos is an undead general of the Host. Once a noble dragon of unknown breed, Kimorgos was one of the very first victims of the Outworld's dark magic when it first appeared in the Serenity Woods, which transformed into a decaying corpse desiring nothing but the expansion of the Serenity Empire. Fueled by not only hellfire, but a hatred for all living, Kimorgos brings death to all, so he may add their bones to his ever-expanding collection. 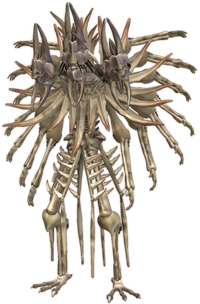 “The grave is a door / onto this new life; we / this energy / Endless Host”

Pyyls'as is the enigmatic and horrific advisor of Praetinnath and sometimes regarded as the Host's voice when the Lich Lord is not present. It is unknown whether Pyyls'as was pivotal in the transformation of the Serenity Empire, though now, it exists as a figure of unique nature within the Outworld itself. A being driven by a mad inclination for power, its position as the advisor to the Lich Lord guarantees Pyyls'as' role as a high-ranking figure in the Endless Host.

“For the glory of Man and for the entire Koldenwelt, this abomination must be destroyed.”

“Certe eveniet unam rem. (I assure you, one reality will be realised.)”

“Voit ottaa minun luut, mutta sieluni palaa Ääretön Joelle. (You can take my bones, but my soul will return to the Infinity River)”