The Syndicate
Emtor is one of the more notorious and dangerous bounty hunters within the Quadrant Galaxies, once aligned to the dangerous Quadrantia Syndicate, he was forced to work as a freelancer after Rambo Nation destroyed their headquarters and took their leader captive. Even since Emtor works from his new home at Stasje to do his criminal work.

Emtor is born in 58 BQF in the Tigris Galaxy where he learned in his youth to trade and gain profit on it. Using dirty tactics Emtor gained the attention of Levarrion, who had send scouts of the Syndicate to the Tigris Galay to gain a foothold there.

Long before the Tigris War began Emtor was already employed and executing missions within the Quadrant Galaxies at behalf of the Syndicate. During the Second Galactic War in 0 BQF Emtor was contracted by theImperial Alliance to kill an ambassador of the Hutter Kingdom. After infiltrating Ramerodaras, the Senate Building of Rambo Nation at that time he found the Hutter Ambassador and killed him in front many other delegates. He managed to evade Rambo authorities and returned to the Syndicate HQ in Quadrant 89 to receive his bounty. Later on he once again travelled to the Rambo Capital where he stole some secret and classified information from the Library of Vulmiartari. There he encountered Princess Ramtilsae whom he took hostage and after a defeat by Rambam, he fled the Capital and retreated back to the Syndicate HQ with the princess. His captive was later saved by Rambam and Emtor fell out of grace due to the simplicity of a tracking device revealed the location of the Syndicate HQ.

Years later, during the Great Cyrannus War vice-admiral Ramcard led an assault at the HQ and either captured or drove all bounty hunter away from the planet, later named Syndicatia.

Emtor fled back to Quadrant 82 where he settled himself in a house at the icy mining planet known as Stasje, a Rambo Nation colony and remained into hiding. Ever since Emtor has been noted as the most wanted criminal within the Quadrants wanted by the Rambo Goverment. During the second month of 07 AQF, Emtor was tracked down by his past employees, the dreaded and cruel Lizardian. The believed to be dead captain Lizrawn once again needed Emtor's services and would pay him well. They only needed to steal a ship. Emtor, pleased and thinking of an easy job took the bait and took a sqaud of Lizardians and Lizrawns to the Rambo Capital, where it turned out they had to steal the massive star destroyer Infernal, former flagship of Mortikran and recently sieged by a joined fleet of the Lianna Initiative. Taken a back he informed the Lizardians that they were approaching the Infernal unseen, though Emtor reminded himself that Lizardians had no sense of humor, or at least not for his kind.

They managed to steal the ship and enter the Metruia Nebula before being tracked down by the USS Excelsior. After the mission, Emtor returned to Stasje.

During the 10th month of 07 AQF, Emtor aligned himself with the re-formed Syndicate and became one of its bounty hunters. Shortly afterwards, he was send on the first Syndicate mission together with the Saurdoshan Hunter and Vezktan to infiltrate the royal palace of Rambo Nation in Tirithsilliana. The mission, a joint operation with operatives of the Cyrannian Syndicate and the Vengeful Claw was to assassinate the high profil leaders, Ramashe, Apollo and the young Maryah to disturb the diplomatic meeting and cause war. The mission failed due to various factors, when in retreat Emtor aimed and fired at Laoi though Ramanei managed to jump in front of him and took the blast in her back, almost dying Emtor watched in disbelief when Kara healed the young Rambo Serindia before fleeing.

In june 08AQF/NE, Emtor was part of a group of bounty hunters that took various New Republic senators hostage. With the arrival of Ryen, Emtor managed to escape the building before the authorities were able to apprehend him and escaped the planet during the choas of the destruction of the senate building. 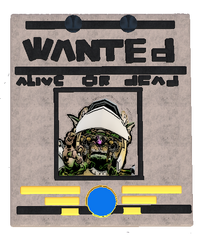 Emtor is a cruel and dangerous individual, with quite some skills and a tendency to fight dirty, he is not to be underestimated. During his time at the Syndicate, his reputation and missions gave him a position as one of the 10 prime bounty hunters for the syndicate.

Emtor is most famous, or notorious for the following crimes:

He is also known to be quite proud and arrogant! He has a ship of his own, a personal created small space craft with four wings and a flight deck, he uses this vessel for all of his travels and even has a cell onboard for his captives. Due to its special coating at the hull, the craft is difficult to monitor on radar or scanners. At maximum his craft can accommodate 4 to 5 persons.

“I guess I have to tolerate them”