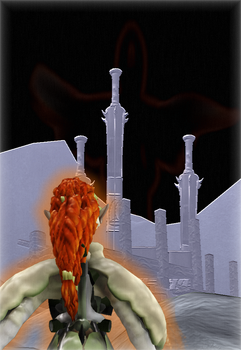 “Thus shall it come to pass; a union of virtue shall venture forth and finally reveal unto the world the shadow that looms ever watching, awaiting its moment to strike.”

There's something out there in the Northern Regions of the World, a juggernaut of evil gathering its strength to crush those who stand in the path of darkness. In the north of Koldenwelt, rumours have been circuling for years about the dark energies that emanate from the ancient fortress of Gul'Sharkû, a once beautiful bastion of light now turned a decaying ruin of darkness and death. Though many have ventured to the fortress in the hopes of putting an end to the darkness that spreads, none have returned. Troubled by this rise of sorcery, the Elven Queen Aranhilwen, Lady of the Doredhelwen sends two of her most trusted messengers to the north to investigate this growing threat. Joined by friends of old and new and faced with threats unseen since days of antediluvian, these emissaries of Aranhilwen face their greatest threat.

Part One - A Growing HorrorEdit

In the crowded and stuffy Rusty Bear Tavern in the northern town of Heriad, adventurers from across Koldenwelt responded to a call for help from a noted Elven wanderer. Her red hair gleaming in the glow of the tavern's fire, Lindariel watched as her new companions entered the tavern's doors. Stepping in from the cold, wrapped in a heavy woolen cloak of southern origin and with a bow slung over his back, a slender birdlike creature walked in, shivering from the cold. The infamous Headhunter Kanna, a Lagosi mercenary, walked through the doors and sat himself down at a nearby table, placing his legs upon it while he leaned back in his seat. He looked towards the bird creature and smirked to himself.

Stepping in appeared a Merovar in dragon-made armor. He entered with a blade in one hand and shining magic on the other.

Coming dowon the stairs, a slender and young female elf approached, she seemed an Urindaleë from the North, clad in revealing armor in red and yellow. She smilled to the others and crossed her arms behind her back.

Lindariel and her companion, Pelogias watched as their companions entered the tavern, bowing gracefully to each.

Kanna made an amused chuckle and sat himself up, placing his feet to the floor. His amused expression soon turned to stoic as he looked at the group, filing his nails with a dagger. Leth'Ran shook himself, showing off his vivid red feathers. After warming up he pulled down his hood to reveal a flat plumage that extended backwards and sat near to the fireplace.

Suddenly, the door shuddered as a huge, orcish figure appeared from the forest, clad in red armour and carrying a massive axe.

Finduliaë raised on eyebrow in surprise. The orc stared at Lindariel.

Finduliaë raised her shoulders and stuck her tongue out!

Lindariel stood up and placed her hands on her hips. She looked at the company with a small smile.

Lindariel looked at the new arrival.

A shadowed silhouette entered the room, donned in black clothing and armour, moving between the guests staring at them with a mixture of contempt and curiosity. It was a human.

Earath let out a chuckle.

Javina raised her scimitar. A bolt of magic shot from Lindariel's hand, knocking the scimitar from Javina's hand. Smiling warmly, Lindariel asked everyone to sit down.

Javina took her blade back and sat down. Leth'Ran nodded and moved to a chair by hopping onto a banister and jumping back down onto a stool where he perched.

Leth'Ran nodded and stood up fro mhis chair, pacing gracefully towards the stairs with his short cloak flowing behind him.

Part Two - On the Road Edit

Retrieved from "https://spore.fandom.com/wiki/Fiction:Eminence_of_Sorcery?oldid=764938"
Community content is available under CC-BY-SA unless otherwise noted.