Knowledge will result in unlimited power

Secondary, scientist and advisor in service of Tyrómairon

“"And we arrive at your problem, Ekrillium! When I desire you to think, I shall ask you to think!"”

The Mornûnendur known as Ekrillium is an older and ancient member of that dark order. Though by far not a warrior in nature, he is more of a scientist and an (unwanted) advisor to his master, Tyrómairon.

Though not a warrior, his power is quite immense as he managed to kill one of the Atlantica. Ever since his awakening he aids Tyrómairon in his master plan.

In ancient times Ekrillium came into excistance as a servant for Tyrómairon- becoming part of his warriors, the Mornûnendur. Upon his introduction to Tyrómairon, he already expressed his (unwanted) advise towards Tyrómairon- but managed to gain his trust anyway. Ekrillium never like the other Oikoumene- and even openly voiced his dislike of Tyrómairon and Libraé their relation. Though was severly tormented for it by doing so.

During the Apotheosis Ekrillium supported Tyrómairon in his rebellion against the Primercer, mostly providing scientific materials instead. Near the end of the Apotheosis Era, the Oikoumene suddenly vanished for reasons unknown while Tyrómairon and the Mornûnendur did not. Tyrómairon contemplated some dark master plan and sealed his warriors away at differant planets spread among the Cyrannus Galaxy. Ekrillium aided Tyrómairon in creating the hibernation means before he himself was sealed away for years.

Ekrillium remained in hibernation for thousand of years, until he suddenly was awoken by Tyrómairon somewhere during the Intergalactic War and the Great Cyrannus War with the other Mornûnendur. He soon began aiding Tyrómairon in setting his master plan in motion, but mostly studied his ancient books and scrolls for information and intelligence, as well as investigating current situations- as much had changed since his hibernation.

While the Great Cyrannus War raged on and finally came to it's conclusion, Ekrillium proudly watched as Tyrómairon became the Emperor of the newly formed Galactic Empire of Cyrannus- providing order and peace for the entire Cluster.

Afterwards Ekrillium travelled to a planet known as the Shrine of Selenyia, located within Cyrannus. This planet housed a temple dedicated to one of the Atlantica known as Selenyia. As the Clash of the Gods was still raging on, it was forbidden for an Mornûnendur to enter the holy places of the Atlantica. Together with the scion known as Ryouchiae, the Atlantica entity known as Selenyia faced Ekrillium and warned him of his tresspass. Ekrillium called Selenyia a relic of the past and long past due. While both entities charged their energies, the battle began. Ekrillium attacked first, sending dark energies towards Selenyia. The Atlantica blocked the attack and wounded Ekrillium with her elemental energy. Ekrillium responded in unleashing lightning energy, trapping Selenyia in a painful field of electric energy. He then dispathed the scion Ryouchiae with a mere movement of his hand. Yet Selenyia broke free and grabbed Ekrillum's arm, breaking it in the process. Selenyia charger he energies again to finish Ekrillium, anticipating this he grabbed her own hand and using an ancient biting technic, he backfired the Atlantica powers into her own body. Unable to withstand the attack, Selenyia's own powers began to run wild and destroying her own body. Ekrillium smiled as the Atlantica died before his eyes. Afterwards he soon left and informed his master of the event and that he gained the knowledge to open a portal into the Quadrants.

During the fourth month of the Dark Times, Ekrillium summoned Tyrómairon himself to Capricaerón as his studies informed Ekrillium of a secret backdoor into the Quadrant Galaxies. The ancient Atlantica portal located there connected Capricaerón with the Rambo Capital- wich could give the Empire the oppertunity to bring the Rambo Nation under their rule as well. Suddenly, Tyrómairon's eyes began to glow and the portal began to activate with a tremendous light. The Dark Lord unleashed Mornûnenduran energy which began channeling into the portal, making it gleam stronger than a thousand suns and opening a wormhole. Using the wormhole, the Imperial Navy invaded Rambo Nation and placed it under a "protectrate".

Afterwards he returned to his studies, disliking the fact that his master made a weapon truce with the Atlantica later on during the conclusion of the Clash. Two years later, during the third year of the Dark Times, Antedilvian informed Ekrillium that he sensed that the single greatest threat to the Plan was about to arise. Confused Ekrillium began searching for ways to counter it. During the sixth month of the third year, Ekrillium was summoned by his master for a meeting. Ekrillium entered the underground palace, where in a chasm the massive Legion was being constructed, impressed he was sure his master would become the secure ruler of the entire Cyrandia Cluster. Tyrómairon informed Ekrillium, and two other Mornûnendur: Morumadáin and Apeligateza about recent events like the Gigaquadrantic Conflicts. Ekrillium was tasked with finding Oikoumene artifact, so that the Primercer could not use them. Confused, Ekrillium began searching for ways to locate them, as he had no clue of them to find such artifacts.

Ekrillium recruited both Akagêlth and Chi Chodecra to serve as Inquisitors within the Imperial Inquisition. During the fifth month of 07 AQF, he informed his liege lord, Tyrómairon that he learned from Grand Mandator Aporyan that there were some within Rambo Nation that wanted to end the Nim-Glaré Concordat. Fearing a loss of his studies he confronted his liege lord, as he wanted to know if he was going to do something about it. Realising his mistake his lord snapped at him that he thought to much though surprised Ekrillium with the fact that he wanted to speak with Ramashe in person at the Rambo Capital. Ekrillium left rather satisfied and promised to make all the arrangements for his depature from Orbispira.

After the Emperor's return, he admitted he had not found any new Oikoumene or Atlantica artifacts, though he did find the mysterious contributor that gave senator Guolivian the information that aided in the downfall of the United Republic of Cyrannus. It turned out it was hailing from the Space in Between, at the planet Carnthedain by an individual who was known as the Sorceror of Carnthedain, the dreaded Morgandaûr.

This certain Mornûnendur is an ancient and one of the older Mornûnendur. Though not a warrior by nature, he is more of a scientist and (unwanted) advisor for Tyrómairon. Yet his cunning is unmistaken, and his cruelty well known as well as his fierce loyalty towards his master.

Sadly, Ekrillium is also considered unstable, a bit mad and unpredictable. However he remains fiercely loyal to the Dark Lord and wouldn't hesitate to sacrifice himself for his master's plan. Ekrillium is also notable for disliking the use of Acolytes and as such didn't choose one for himself nor does he want to be involved with one of them. Nor does he really sees the other Mornûnendur as allies, he only sees his master as that what is worth living for. In fact, it can be said that the concept of allies and enemies is a bit alien for Ekrillium, he either likes your, dislikes your or can tolerate you.

As an Mornûnendur, he can use all of the known Mornûnenduran powers, though seems most skilled in the use of electric based energy attacks as well as using "dirty" and ancient technics to defeat his enemies, knowledge he gained from his studies.

“My life and servittude is your!”

“The master seems to trust them.” 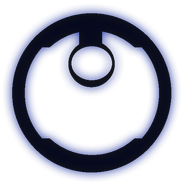 Ekrillium's Oikoumene symbol.
Add a photo to this gallery

“We Acolytes are more powerful than you deem us, strange-faced one.”

“My most trusted advisor. Serve me well, Ekrillium, as you always have.”

Retrieved from "https://spore.fandom.com/wiki/Fiction:Ekrillium?oldid=662451"
Community content is available under CC-BY-SA unless otherwise noted.