The universe is to be dissected.

60,235 years
“The Dracogonarious people has gone through many hardships. We have fought creatures in our lands, aliens from the depths of the void, and even ourselves. Yet, our people always stands and endures. Through knowledge and superior tactics, there is no problem that cannot be solved, no obstacle that cannot be overcome. This is how the Dracogonarious people are like.”

With over fifty thousand years of history, the Dracogonarious Empire was an ultimately benevolent faction who strove for peace and prosperity in their space, wishing to learn all there is to learn about the universe they lived in. However, they were far from harmless as they would fight back aggressively if provoked, and despite being men and women of science, they were not afraid to add more races to their list of extinct galactic species. The end of the war with the Corruptus led to the Empire reforming into the Indoctrinate Collective, which serves as their successor.

The Dracogonarious Empire was formed circa the Earth year 57455 BC when the Dracogonarious scientist and engineer Gareile Kronk united the species under a single rule via the creation of the first spaceships. Prior to the fully functional ships, many prototypes were stolen by the Marinar, causing a part of their species to ensue an exodus from planet Draka-2 while the rest were absorbed into the Dracogonarious' government. The Dracogonarious expanded through the space around their homeworld in a steady but increasing speed.

As their area of influence grew, they eventually came across other small empires belonging to three subspecies: the Dracogodasimar, the Dracogovaesis and the Dracogogavil. These territories would be quickly absorbed into the Dracogonarious Empire. While the origins of the three subspecies remains unknown, scientists believe that ancient, pre-spacefaring Dracogonarious were taken away from their homeworld by another alien race. In the last thousands of years, the Empire also started to develop its famous bioengineering technologies, resulting in the creation of the shipeater weapons and many alien cultures, the most notable being the Spinker.

The Dracogonarious Empire would eventually meet its match when they met the children of Errr, the Marinox, and the war between the two lasted for around 200 years, causing mass destruction for both sizes. Its climax occured in the Battle for Planet Kaizox, where the Dracogonarious joined forces with several allies to push into Marinox space and destroy the machine that powered them. In the aftermath of the war, a revolt started by Old Fang led to the creation of the Empire's dreaded antithesis, the Vengeful Claw. For the next 600 years, the Empire did the best it could to hide the Claw's existence from their allies, and from galactic affairs altogether.

The Dracogonarious Empire was one of the major fighters of the Second War of Black Fog, and a notable empire during the War of Claim. At the beginning of the war, the Empire joined forces with Spinker Empire and Bonio Republic to combat the Corruptus, being the overall leader on the war against the demons. At the same time, the Empire also fought the growing Tabescere threat. As the wars progressed, the Empire joined forces with other factions such as the Third Sovereign Domain and Kicath Empire to combat the Loron'Kikra and the Marinoxidiz. After the death of Kolossus, the Empire was also aided by the Thoi Armies of the Realm of Dreams, and despite devastating losses, they eventually won the war and defeated the Corruptus. With both wars over, the Dracogonarious, Spinker and Bonio united their governments into one with the hybrid Maryah as the leader, leading to the creation of the Indoctrinate Collective.

The leaders of the Empire are the Emperor and the Supreme Advisors, an elite council formed by numbers of high ranking individuals of each member species in the nation. This council is made entirely of females. They all remain at the Empire's capital of New Draka while each separated planet possesses a figure known as the Planet-Governor who acts as the head administrator of his colony, while individual cities possess individuals deemed Advisors, who act essentially as mayors who answer to the Planet-Governor. Above the Planet-Governor are the individuals known as Sector-Governors who, as they name imply, govern over entire sectors of space and are the ones who directly obey the orders of the Supreme Advisors. Advisors, Planet-Governors and Sector-Governors are all chosen by their skills and their contributions to the empire's well being.

Known supreme leaders of the Dracogonarious Empire include:

Princess Maryah, inheritor of the throne

The Dracogonarious Empire's society was well known for being extremely harsh and unforgiving to criminals. All citizens were allowed, and actually encouraged, to always carry a weapon of some sort. Citizens were also allowed to shoot, and kill, any criminal they may find. There was only one kind of punishment in the Dracogonarious Empire: death, and according to their laws, "incorrect" citizens did not have the right to live. While the Empire did have the concept of trials to confirm or deny if a person was innocent or not, it did not have the concept of prisons. When it came to species laws and influence, the Empire was equal among all members except for the Klamb (not spacefaring). Despite this, the Dracogonarious retained most of the influence.

The Empire was a post-scarcity society since several thousand years and therefore did not possess a currency, but it maintained a coin known as the Draka Credit for the purpose of international trading with their allies and trade routes. All citizens were expected to work and do their part to contribute to the overall efficiency of the empire, and by doing so, they received resources such as food in order to survive in good conditions. Citizens who did not work by extension did not obtain free resources and were often shunned by others as being lazy and unproductive. Due to the biotechnological-centric nature of the Empire, scientists of the biotechnology branch tended to be the most successful.

The Dracogonarious Empire was a notably advanced native empire of the Milky Way Galaxy, with their technological trees being a combination of the designs of each of their member races, altered to fulfill the needs of all of them with no exception although keeping a generally Dracogonarious-inspired form and interface. The Empire is fabled for its great advancements in the field of bioengineering and the scientists are more than able to create an entire new species from scratch, having done this in the past in order to create races such as the Gezzirack, who eventually began living as citizens of the Empire. They had also been seen reviving previously extinct species in order to populate wildlife reserves and sanctums, effectively negating their extinctions.

Dracogonarious Empire civilians had little stigma with cybernetic enhancements, and according to official records, around 73% of the entire population had at least one enhancement in their bodies. Popular pieces of technology to increase a person's life quality in the Empire were health improvers or life enhancers which may have granted the individual biological immortality. The Empire was also highly advanced in the field of nanotechnology, with their most widely known form of nanotech being the famed shipeaters, weaponized nanomachines made with the intention of consuming non-Empire-made alloys in order to destroy enemy spaceships. 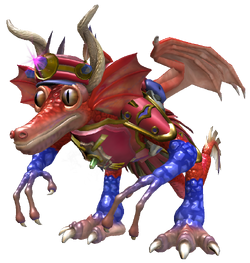 “I am willing to sacrifice myself for the good of my people.”

Commandant Jerkon is the last naval commandant of the Dracogonarious Empire. The son of Drakley and archenemy of the Old Fang, Jerkon is widely seen as one of the the greatest heroes in Dracogonarious history since his father, for his heroic acts against the Corruptus. An stoic, intelligent, celibate and serious individual, Jerkon is a no-nonsense soldier who goes great distances to prove his point. 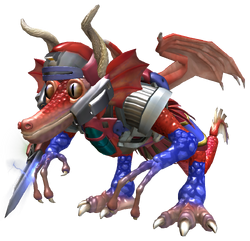 “Glory and success for the empire is all I strive for.”

Supreme Captain Drakley was the military leader of the empire at the time of the Marinox War and is seen as the greatest man in the species's military history. Famous for leading the empire's attack on Kaizox which destroyed the race, Drakley was killed in action by Errr, sacrificing himself to end the war. Widely regarded as a hero, Drakley's legacy lives on his son Jerkon. 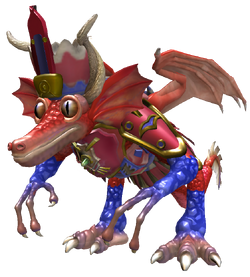 “Someone needs to step up and lead us to our destiny.”

Emperor Gareile Kronk, the Great Science Lord, was the first ruler of the Dracogonarious Empire. The man who revolutionized the Dracogonarious as a species by inventing the very first functional spaceships, Gareile was responsible for the empire's creation and is regarded as one of the most important figures in Dracogonarious history.

“You are quite welcome in our territory.”

“You are a friend of the Dracogonarious people.”

“We may be a people of science, but we are not harmless.”

“You need to be corrected.”

“Allies honoured and worth our valor, those of the Red Technocracy and we of the Third Sovereign Domain share a great many values and ideals - a coincidence I would think not, for the greatest consciences do indeed think alike.”

“It has not been emphasised enough that if the Dracogonarious and their allies had not helped us during the Plazithian Grox Wars and our patriotic revenge, the Delpha Coalition of Planets would not exist in the state it does today.”