More souls for That Which Devours!

The Devourer's Chosen was an empire-wide cult dedicated to the Corruptus initially created out of Indoctrinate Collective worlds dominated and corrupted by the demonic entity known as Emperor Marigrax. Created as a form of increasing the power of the Corruptus's demons and as a foil to the inhabitants of the Borealis Galaxy, the Chosen's ultimate goal was tear reality apart with their powers in order to throw the First Gigaquadrant into Chaos, leading to the destruction of the universe. However, their goals eventually resulted in failure after their demon masters were defeated, and the cult has since been dissolved, its remnants being absorbed into the Dominion of the Xhodocto.

Despite their relatively short existence, the Devourer's Chosen remain one of the most notable demonic empires of modernity, their actions nearly resulting in the extinction of an entire galaxy worth of sapients and the scars left by their attacks linger on to this day, with little indication that they will ever heal completely. The devoted servants of the Corruptus became legendary, especially in Borealis, where they are seen as one of the gravest threats the galaxy has ever faced since the end of the ancient war between the Kormacvar and the Grox Empire.

The Devourer's Chosen was formed when Marigrax appeared in the a colony of the Indoctrinate Collective of the Borealis Galaxy. While the Dracogonarious attempted to eliminate the invader, his vile corruption powers eventually brainwashed the inhabitants into becoming dark cultists. Marigrax moved his empty eyes to other star systems and started to corrupt more species into joining his cause, marking the birth of the Devourer's Chosen. Geltastra, one of the Vanguards of Shu'wokerama was then tasked to lead this cult, while Marigrax acted as a "corruptor" commandant. The Devourer's Chosen's first move was to aid in covering Feldosia from the Unified Nation of Ottzello during the Corrupt Occurance. It is unknown why the Chosen were involved and what was their reason in doing it, but it is speculated that they were lured into doing it by Kolossus.

The Chosen fought in the Second Borealis Galactic War. Before the war actually started, the Chosen were tasked to aid the Grand Troopers of Foreign Origins in search of a "dish". Causing further damage to UNO, the Chosen managed to recover what they were seeking. During the war itself, the Chosen were one of the responsible for bringing the Xi'Arazulha into Borealis, making them the actual ones behind their invasion. They also succeeded in causing UNOL, the leaders of the Zoles Imperium and Da Rogue Leedas in dead space with a broken Cold Relay, that could only be fixed 120 years later by a single old Caretaker. The Chosen would later corrupt Ref'kolar and his Dark Loron soldiers, adding them to their arsenal. As the Xi'Arazulha destroyed the galaxy, the Chosen did their best to stop anyone who attempted to stop them. This conflict eventually led to a massive battle between the forces of Order and Disorder against the Chosen, who would be defeated and have almost all their champions killed. While the battle was lost, the war was merely beginning.

During the Vague attack, the Chosen remained hidden, preparing themselves for the next attack. When the War Economy was introduced, the Chosen were mostly unaffected, as they did not have a concept of economy. The Chosen would also align themselves to the Vague, helping them in attacking UNO while they were in quarantine. This alliance ended when the Vague joined the forces of Order. During the Wrath of Gods, the Chosen acted once more. Sending attacks on various important planets, the Chosen revealed their master plan: merging Borealis with Chaos, and cause a new Scourge. Using the powers of the Chronoscopic shard, the Chosen desired to create a portal capable of such feats, what would surely bring an end to the universe. However, the forces of Order invaded the Chosen's homeworld itself, killed off their leaders and confronted Emperor Marigrax, defeating him and destroying his body and soul.

With their god defeated, the weakened Chosen fled Borealis to never return. The little that remained of them was eventually absorbed into the Dominion of the Xhodocto.

The Devourer's Chosen was a theocracy whose leader was the Corruptor, Emperor Marigrax, who oversaw the actions of the empire from his Corruptus Overworld. Immediate leadership over the empire was given to the Dark Apostle, Geltastra, who was responsible to tend to mortal affairs while the Corruptor focused on his plan of destroying Borealis. The Dark Apostle was helped by series of Acolytes who served as her warriors and advisors, though not much is known about this caste due to their little exposure in intergalactic affairs. Known leaders of the Devourer's Chosen included: 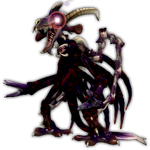 The society of the Devourer's Chosen was revolved around their religion, the worship of the Corruptus. Conflict among each other was practically non-existent thank to the brainwashed corruption of Marigrax, and all of the people's aggression was instead focused on alien empires, with an emphasis made on the Indoctrinate Collective due to being considered the worst of the heretical empires. Citizens of the Chosen would periodically pray, preach and do sacrifices in characteristic shrines built in the center of their settlements, this being considered a holy commandment which should always be followed every day unless the individual person was serving in the military.

The Chosen retained the post-scarcity traits of the Indoctrinate Collective but did no commerce with any other spacefaring nation due to their hostility. All cultists were expected to work and do their part to contribute to the overall efficiency of the empire, and by doing so, they received resources such as food in order to survive in good conditions. Citizens who did not work by extension did not obtain free resources and were often shunned by others as being undeserving of their god's mercy, often leading to executions.

In technological terms, the Devourer's Chosen was for the most part identical to the Indoctrinate Collective, making them one of the most advanced empires in Borealis's modernity with their technological trees being a combination of the designs of each of their member races, altered to fulfill the needs of all of them with no exception although keeping a generally Dracogonarious-inspired form and interface. However, unlike the Collective, the Devourer's Chosen was not known for its bioengineering prowess due to having no interest in it.

While the Chosen retained powerful technologies such as weaponry, advancements in medicine and nanotechnology, the empire as a whole remained technologically stagnant from its formation to its destruction. This is due to the extreme focus on religion leading to the eradication of all scientists, who instead preferred to become warriors or preachers rather than waste time researching new technologies. The use of mechanical enhancements on the population was also nearly completely replaced by entropic mutations which had the same purposes.

Without a doubt the most notable trait in the Devourer's Chosen was its nature as an empire of cultists who worshipped the Corruptus as gods. Shu'rimrodir was the highest deity of the cult, immediately followed by the fellow demon gods Shu'wokerama, Shu'ytrogarva and Shu'suvreca. Notably powerful demons such as Shu'rahkavarh, Arrtkar Crowart and indeed Emperor Marigrax himself were seen as direct heralds of their god sent to the mortal realm to guide the Chosen to success, and were respected as living avatars of their deities.

The Chosen also had the concept of 'Allied Gods', which served as a general name for the demons of the Samut'angar and most specifically their leaders such as the Xhodocto, Vyro'Ralzora and Maktanshatin. Other spacefaring empires who worshipped any of these Allied Gods were the only aliens the Chosen would not vehemently attack on sight, though the worship of non-Corruptus demons was extremely limited and often done as afterthoughts in their preachings. After all, while the Allied Gods were important, they were just allies, and the Nightmare Gods were much grander and much more worthy of respect.

“You accept the Devourer's word, and for that, you shall survive the great scourge to come.”

“Wrong the law of the Nightmare God and a pain unlike any other will fall upon you.”

“By war and blood, you will pay for your heresy! Kill! Maim! Burn! Destroy!”

“Only death awaits for every single one of you!”

“It was only logical that their interests were aligned with ours. Their so-called 'Allied Gods' are the arbiters of their desires and laws.”

“We are the warriors of the ultimate god the Devourer...WHO YOO BETTA JOIN OR IMMA SLAP YOO UP!!! OR WORSE SACRIFIC YA!!!!!”

“This cult seems near unstoppable and incredibly difficult to combat. When the galaxy is rid of the Chosen, it will be a better place.”

“bak in my dayz cults were jus dum peepz who went out fer booze an got pissed at parties wen worshippin Roz'Tah'Flok too long. den deyd smak eech ova an argue ova wat his facial feeturs were an how ta smak da heretics who dunt beleev him well. den dey goes all crazy cos dey been drinkin too much yanno an dey decid anyone who dunt agree wiv dem is a dum heretic an dey kill him den start a massiv riot forcin everyone ta beleev in deir religion. yanno wat i say? da chosen ent much different.”

“Insanity is the mark of the unstable. When one cannot control his or her own body they are unfit for enlightenment. This is the cult's folly and by the will of Drakon I will make them see this flaw and have them repent or redeem their souls in death.”

“A good enough reason if any to dispute why Essentials and religious maniacs should never come to command a society of any kind. ... I shall never forget what I learned fighting them. It would be hard not to.”