- Common reaction upon invasion by the Hivemind

The Desolation Hivemind are a collective-minded species created and controlled by the Rethex'Kalik as an external invasion force.

They have become active during the Second Coming as the Rethex'Kalik's main attack forces besides the Legion, where they have been seen attacking the Indoctrinate Collective. They were later seen attacking the Reflective Realm of the Atlantica, causing notable destruction before vanishing once again.

With the formation of the Dominion of the Xhodocto, the Desolation Hivemind joined it along with its Xhousthoe masters.

The Desolation Hivemind species have a large range of physiology which account for numerous types of attacking. Their hivemind nature allows them to be controlled as a full force by the Rethex'Kalik. It is unknown how the Hivemind reproduces; it is likely that more are created on the spot.

The Desolation Hivemind can survive in a vacuum and are therefore able to live in space - among numerous other environments. 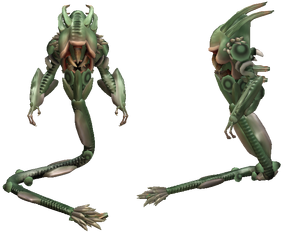 The Warriors are the most numerous force in the Hivemind. With their large numbers they can easily overrun a city in minutes - and are used mainly as a distraction for the truly dangerous forces. The use of their energy can sharpen their claws and strengthen their tails to make themselves all the more dangerous. 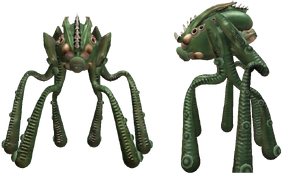 Striders are called so because of their 200ft tall height and their large legs. Able to reinforce their bodies to near-invincibility, the Striders could smash through buildings larger than themselves. They are surprisingly fast for their anatomy. 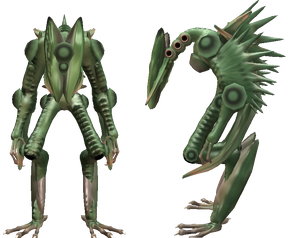 Though more feeble than the Warriors, the Unleashers are much faster and have sharper claws and use of blades. They also seem to have a lunging attack, from hundreds of feet away - and can take down the enemy in a split second. The only thing that could out maneuver an Unleasher is something faster than itself - namely a laser projectile. 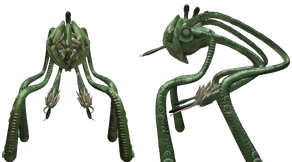 Piercers are like Striders with projectiles. Though smaller than the Strider, the Piercer uses precision to annihilate any target that allows a fast projectile through it. They can also use their energies to reinforce their own being and become stationary turret like creatures. Their weight acts like a wrecking ball when they fall to the floor. 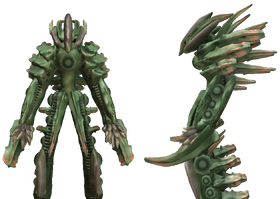 Incredibly fast and relatively stronger than any other species, the only thing able to slow down a Berserker is putting an immovable object in front of its path, and even then it will not stop. With energies able to turn themselves into an unstoppable force faster than the eye could register - and before the enemy could even reload their weapons, the Berserker is already hundreds of metres behind them. They can also release massive bursts of energy to break, disable or even possess any object that is a potential threat. It is theorized that objects travelling at Hyperluminal speeds could destroy the Berserkers. 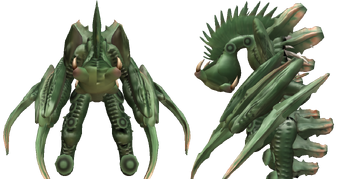 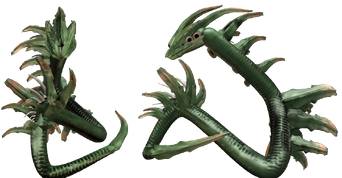 Huge, indestructible, and the epitome of fear, the Ruin Serpent destroys all in its path. It has been seen on few occasions but it is known to destroy opposing forces in mere seconds. It is not known how to destroy it but Hyperluminal missiles may be the answer. 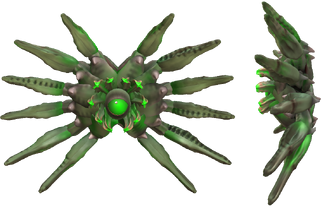 The minds - also known as Doomclaws are the intelligent end of the Hivemind. Able to possess anyone in range, the Mind's greatest power is the opponent themselves.

“Our forces are unstoppable and ever-destroying. Desolation eternal!”

Retrieved from "https://spore.fandom.com/wiki/Fiction:Desolation_Hivemind?oldid=660476"
Community content is available under CC-BY-SA unless otherwise noted.