During the early Golden Age (after defeating the Grox and reaching the Galactic Core), the Delpha Coalition of Planets began to expand into the wider galaxy and beyond, even exploring other galaxies and dimensions. This has given the DCP many benefits, such as new allies, technology, better living and a better economy, exploration and scientific understanding. But this outward expansion brought many major wars during the later Golden Age, such as the The War of Ages, the Trucinex War, the The Nanohorde plague and the DCP/Loron War (and even such inclusion in the Second Galactic War). The DCP's ultimate quest is to destroy evil and aggressive empires using force, however, it was coming clear that the DCP needed not just an Emperor and a member council...

All these wars and sectors Edit

During The Great War, Emperor Wormulus II decided to have 5 clones (he would have mind transferrals), in case he was ever killed (even though he is near-immortal). However, the clones were created to grow up very quickly. But, after the the Xhodocto truce, it was clear that the clones weren't needed. However, just before they were about to be incinerated, the Emperor had something better planned, these 5 bodies would be turned into super soldiers or Warlords (they were also genetically modified). It was clear that the Emperor could not manage the entire DCP it was too large, instead these warlords would be in charge of some of the DCP's deep space militaries. The Emperor and the DCP council will be in charge of the DCP overall, but the Warlords would manage wars and alliances in 5 different DCP sectors. The Emperor would have the Delpha Sector, while 3 other warlords would operate in the Milky Way, and two for extra-galactic affairs.

These warlords have their own personalities, but have bits of memories and knowledge from the Emperor (although not the whole thing) and other great warriors such as Admiral Kilnok. Each has there own specialties in the art of war (and have powers to a limited degree), and form some of the greatest warriors, known, even rivaling champions of the greatest empires. 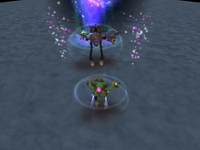 Eclipsos is the greatest of the warlords, second only only to the Emperor in his skills of fighting. Eclipsos, while like all the warlords is still second to the Emperor and the council, but is in control of military and diplomatic operations in the Expansion Wedge Sector in the Milky Way, and several other sectors. He is perhaps the most philosophical warlord, and as questioned the Emperor's policies on occasions.

Deal with the Vartekian Empire

Eclipsos struck a deal with the Vartekian Empire for their new device that increases health. Emperor Wormulus II, was dis-pleased with Eclipsos, however, Eclipsos has maintained this deal will benefit the Expansion Wedge sector.

Eclipsos has had several recent arguments with Emperor Wormulus over certain subjects and plocies. He has recently been trying to form his own economy under Wormulus's mandible (Grimbolsaurians have noses, but their mandibles detect smell). However, Wormulus discovered this, and Eclipsos was warned that he would lose his status as a Warlord. After this daring and bold action against the Emperor, Wormulus II has become increasingly wary and less trustful of Eclipsos. Eclipsos is losing his credibility - the Emperor sent a spy to watch him, and make sure he tries nothing like this again.

Eclipsos found the Jarzo spy, and killed him, his chopped up remains given to the Emperor as a present on the new year. Soon after, Eclipsos declared war, and has allied with the Vartekian Empire and the Zazane. 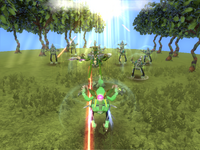 Mauloron has been charged with controling the Galactic Core sector. He has been opening treaties with the Grox (the DCP/Grox truce). But don't let this fool you, he is quite tyranical. He also has an interest in controlling nature to do his bidding. He is rather obsessed in control. Mauloron also has an interest in hunting, and wears the furs and hides of species he has hunted around the galaxy.

Fitting, that he is near the core, and harnesses the power of nature (and the Grox hate nature).

Mauloron has been strangely quite recently, and their has been little communication between his space and the Delpha Sector.

Tricarrion the giver of doom Edit 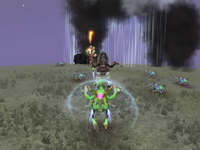 This mighty warlord's favourite interest is in death and destruction. In fact, he keeps a miniturised version of the Staff of Death. Tricarrion is also the most merciless of the warlords, and pays large expenditures for superweapons. Tricarrion keeps watch over deep space colonies, and fortunately, is the Warlord with the least power, for the moment. He also always hides his face behind a mask and a hood to strike terror into the enemy.

Tricarrion has seeked out the Xhodocto, to learn their dark teachings. Tricarrion's path into the laws of the Xhodocto can be found here.

When the Emperor discovered this, he was angry with Tricarrion, because although the DCP is at peace with the Xhodocto, the nightmarish war still brings bad memories to the citezens of DCP worlds.

Tricarrion has now completed his training, and has emerged from Xhodcto hell. He now possesses demonic powers! He a danger to all the warlords in the civil war.

Bo Ramik the fighter of the skies Edit 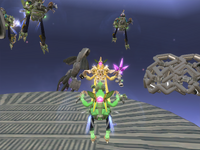 Bo Ramik, is also known as the warrior of the skies (as he fights in the air, with sky warriors)! He controls alliances and military operations in the Tigris Galaxy and Universe 66501. Bo Ramik has a great interest in technology and is the most diplomatic of the Warlords, believing war is not the only option. He is also aiding the Rambo in the Second Galactic War. The Emperor seems to like Bo Ramik the most, out of all the warlords, as he has great potential.

Bo Ramik has pledged his help to aiding the Rambo in the Second Galactic War. Bo Ramik and his legions have liberated a few annexed Rambo colonies and is rounding up a resistance movement.

The Imperial Alliance invaded the Capricorn homeworld, which was threatend by the Imperials Super Star Dreadnought. However, Bo Ramik went on a daring mission to destroy the ships particle cannon. He was literally flying trough the space battle - just in his space suit! He also brought his Legion of Sky Warriors.

Bo Ramik has remained loyal to the Emperor.

On his way to the Tigris galaxy, Bo Ramik decimated the RSA remnants, liberated 10 Rambo colonies along the Rambo and Imperial border and then even gave the Rambo some DCP ships, with some DCP weapons and technology for the Rambo to experiment with. Bo Ramik has now left the war, in order to help the Emperor.

The Fall of Bo Ramik

However, it was already too late, it was clear that Bo Ramik was losing ground. Bo Ramik ordered a full retreat from the Tigris and other galaxies to the Milky Way. On the planet Collingranar, he ordered a massive retreat back to DCP space in the Milky Way. However, halfway through, Tricarrion arrived, his fleet combined with the ships of Eclipsos (and with a few Vartekians). Tricarrion himself stormed thrugh the base his Dark Legion slaying everyone in their path. He was about to destroy the remaining retreating ships, however, Bo Ramik stepped in. Tricarrion first tried to persaude Bo Ramik to joining the rogue warlords, however, Bo Ramik declined. The two fought an epic battle, Bo Ramik even injured Tricarrion, but unfortunately he was too strong. Tricarrion killed Bo Ramik. But Bo Ramik's death was not in vain, he saved his retreating forces, who regrouped in DCP space.

But, as Tricarrion stood over Bo Ramik's corpse, Master Leezard and Lagartoss arrived. The two combined were too powerful for Tricarrion, who beamed away. However, Lagartoss used his psionic abilities to preserve Bo Ramik's mind. It is unknown how much of Bo Ramik's mind has been preserved or even if it truly did survive, but there is hope, hope that one day he will return... 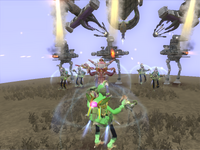 If the enemy see's this guy, it is already too late! He is a knight and carries a large energy mace. He is the strongest of the warlords, and carries huge weapons and armour. His strength matches that of a Xhodocto! Titanozor's is in control the DCP in other galaxies. In his first action, he headed to the Ottzello galaxy to fight in the DCP/Loron War. The message to all Loron was simple- watch out!!

Please view their civil war history on this page.

Bo Ramik and Tricarrion are now ascended, to see their story after the civil war visit this page.

Retrieved from "https://spore.fandom.com/wiki/Fiction:Delpha_Coalition_of_Planets/Warlords?oldid=764582"
Community content is available under CC-BY-SA unless otherwise noted.