DCP territories before and after the Annihilation[edit | edit source]

The Annihilation was the most devatating even in the DCP's history, in which it sacrificed itself after one of the Vi'Navitum Arks carrying billions was destroyed by a tendril of chaos during that fatefull, almost final hour. However, the remaining DCP was transported into a grand simulation by a future force (see Omegatropic), in which all of its territories were simulated by the AI Netspace, where it stayed for several months. Before the Annihilation, the Coalition controlled 2,624,136 inhabited systems and millions of small AI-maintained colonies stretching across the Milky Way, Tigris, Black Eye Galaxy, Cyrannus, Quadrants, Xanthra Spiral, Ottzello, Sana and Forma sisters, as well as some colonies in Universe 66501 and even hyperspace. After they returned to the real universe, the DCP would not be able to reclaim 1,119,136 colonies of those colonies, as they existed in now-doomed galaxies. Today, the DCP controlls 150,5000 inhabited systems, 5 million AI colonies and has re-habited the hyperspace colonies, although its extent is now only over the Milky Way, Tigris and Quadrant galaxies.

The DCP started to spread its influence to other galaxies during the early Golden Age, which opened up the DCP to a varierty of new and powerful factions. The Coalition has spread across the First Gigaquadrant, colonizing the Tigris, Black Eye, Cyrannus, Quadrants, Ottzello, Sister's Sana and Forma, Xanthrus Spiral and visiting yet more. Using Kerr metric wormholes, the DCP has also visted Universe 66501 and has established stations in hyperspace.

The DCP in the Cyrannus (Pinwheel galaxy). The DCP self-destructed these colonies as the GEC wanted full claim to the galaxy.

The DCP invaded Ottzello galaxy (NGC 1300) to "tame" it, and to destroy the Loron. 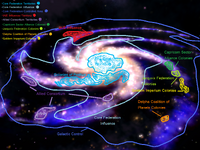 The DCP in the Xanthrus Spiral.

The DCP had a few science colonies in the Whirlpool galaxy, otherwise known as the Sisters, Forma and Sana. 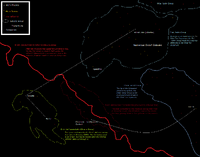 Universe 66501 is now presumed destroyed.
Add a photo to this gallery

The DCP's current position in the Tigris galaxy, perhaps the second greatest galaxy on Sporewiki. 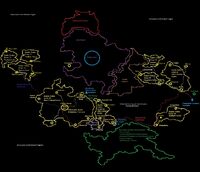 General location of the DCP in the Quadrant galaxies.
Add a photo to this gallery

There are links in the galactic map, which you can click on! 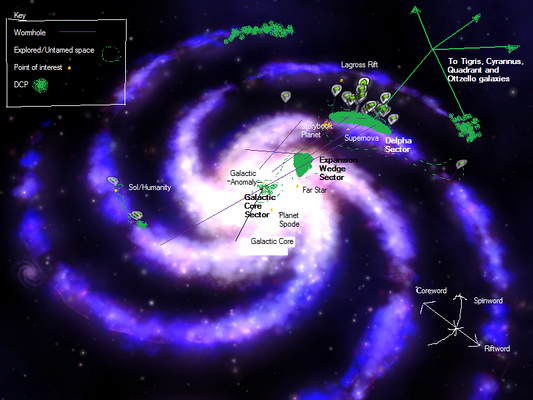 The Grimbolsaurians know the galaxy as the Plazith Rim, and most of the galaxy is still unexplored. The DCP formed in the Delpha Sector, between the Sagittarius Arm and the Scutum-Centaurus Arm, and is 1000 light years in diameter. The DCP is the dominant empire in this region, and most nearby empires consist of only a few systems due to the DCP's conquests.

The central hub of the DCP, it was one of the strongest fortress's known, only very few civilizations could sucessfully invade. It is remains mysterious and out of bounds for nearly anyone outiside it, even in the DCP itself.

Back in the Milky Way, there is a new effort of expansion - a small fleet of Galactic Star Runners, battleships and colonisation ships have travelled to a new sector, under the command of Captain Jazzaroth. It is a pretty region of space, with nebulae and open clusters of hot O-type stars, aswell as a wormhole that leads straight to DCP space. They met a small, foolish and aggressive empire, who demanded 750,000 Sporebucks, however the DCP soon enslaved them. Next they formed a trade route and established colonies, which are blooming, as many planets in this sector, have purple and pink spice, as well as rich in ores.

After several alliances and more colonised planets (rich in resources), Captain Jazzaroth finished constructing the fourth Gargantuan ship. As soon as this ship was active, the entire sector, was under the control of the DCP. The Expansion Wedge is now 90% owned by the DCP, and nothing for thousands of light years can stop the Gargantuan ship. However, although the DCP can be cruel in war, they will generaly protect the new members of this sector, so the Gargantuan is a last resort.

The Grox attacked Mylak, one of the best colonies in the sector, in retalliation, Jazzaroth sent the Gargantuan into Grox space and destroyed two planets, evaporated one colony, and bombed several others. Hundreds of Grox ships were destroyed, while the Gargantuan, was barely scratched. Recently, three empires in the sector have declared war in defiance, but they will be swept away whithin hours by the Gargantuan if they are not careful. Also one planet has been declared a cloning sanctury, where biological weapons such as epics are being created.

Visited during the Grox Resistence era, this sector is 35% dominated by the Grox (It was 90% before the DCP arrived). The DCP and the Welky Grand Council also have presence there. They formed the Grox Resistence, and many huge battles have taken place in the region. The DCP "carved" out a route for safer passage to the core through Grox space. However, this is still a very dangerous region, as the Grox still own a large region there, not to mention the reduced travel range and astronomical phenomena.

There are many others.

Frontier Sectors - Unexplored space
Even the DCP have not explored the full extent of the galaxy. You see, the galaxy is so huge, 85% is still unexplored! And the DCP tend to focus on the Delpha Sector, Galactic Core and more recently the Expansion Wedge. Exploring new space is dangerous, so only the best captains and probes are allowed too. This is due to unknown empires, dangerous astronomical phenomena and so on. This is where the real space exploration lies.

Untamed space - Explored but uncolonised, contains other non-aligned empires
Untamed space, is space that has been explored, but largely un-colonised, and contains other empires and factions (hence the name un-tamed). This includes 10% of explored space. Other empires have claimed these regions (including SSA members), but this does not mean that it will stay this way in the future... These include the Grox Empire, Welky Grand Council, Cephalodian Imperium, some Capricorn Sector Alliance colonies, Trucinex Imperium and all other explored empires (see list below).

Lagross Rift - A strange nebulous anomaly
A strange nebulous region thast is very thick and ionising. One of Admiral Kilnok's first missions was to voyage there. It takes at least 2 days at maximum speed to get there. A recent expedition has revealed that the Lagross Rift is a cloud of living space-born organisms that can collapse into stars! The stars act like breeding grounds for the organisms.

Rim Sectors - Galactic edges
The DCP is also colonising the tips of each of the Milky Way's arms. This is so the DCP can keep an eye on the whole galaxy!

Stability sphere
There is a sphere around the DCP, that is completely stable, and all truly evil, all fanatical and all hostile empires have been eliminated.

Retrieved from "https://spore.fandom.com/wiki/Fiction:Delpha_Coalition_of_Planets/Terra_astrum_(territory)?oldid=832261"
Community content is available under CC-BY-SA unless otherwise noted.