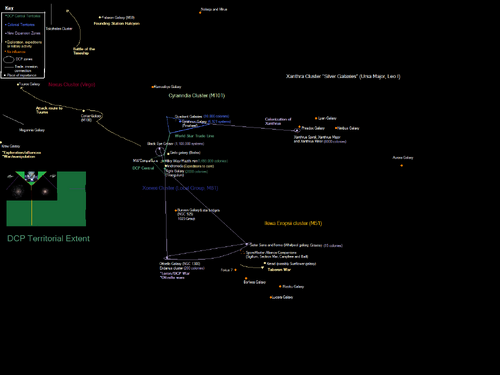 The full of extend of DCP space before the Annihilation, not counting superspatial layers and Universe 66501.
Add a photo to this gallery

The Delpha Coalition of Planets has been very influential in the history of the Civilised Universe. Centuries ago, the DCP had won a major war against the Grox Empire in the Milky Way, a feat rarely seen before the establishment of intergalactic society. After gaining much respect they expanded right through the Milky Way galaxy, using the core as a power source and thier technology expanded wildly. Along their expansion they had met new members and allies, one the Oimonsk, and together they founded the Seven Starr Alliance, a vast alliance that began to explore on an intergalactic level. Later, the DCP had yet again expanded to several galaxies, one, the Tigris galaxy, would change the history of the First Gigaquadrant, with the founding of Onuris, the modern political structure was taking shape. The DCP's technology is more advanced than many other civilizations, and they have many alliances and political ties, making them vastly influential.

The DCP is also notable in that it has rather mixed relations with various races the coalition meets. Because of their advancement, the DCP seldom contacts races below a high Tier 3 level or below Type II on the Kardashev scale, due to the simple fact that they are of low interest or importance. The DCP even more rarely shares their technology, upholding a "prime directive" code. Such civilisations have been in fact known to get "in the way" of the space they require. If the civilisation is lucky, it might be relocated or absorbed, but if they resist, they are attacked pretty quickly. Surrounding DCP territories in the Milky Way for example, there is a sterile sphere of stability where few live or cause chaos. However, the DCP's regards its true enemies with real remorse, and will enslave, extinct or punish. Committing genocide near or within DCP territory, instigating chaos near the border, rebellion, simply being very evil, aggravating the Coalition and harming allies are one of the many ways the DCP will be an enemy.

As for alliances, the DCP is never quick to ally, trust must be built between the two nations. The DCP secretly sprays nanospies that quickly spread throughout any civilization they encounter, which led to one species near destruction due to the fact they were sensitive to the nanoparticles. However, if the DCP finds a strong ally they will be committed to protect them.

As for the border territory, much of the DCP's major expansion zones and colonies have huge amounts of protection. One can expect.

The maelstrom has stopped many attackers in their tracks, it even helped preserve a lot of DCP territory when the DCP vanished during the Annihilation. It is not infallible however. It keeps out spies, pirates and lower to mid tier civilisations quite well, as well civilisations that rely entirely on warp or hyperspace. But it is breachable, especially by societies comparable or even more advanced with a great deal of hyperspatial and spacetime technology. It was breached by the Grox Meta-Empire (helped by dark precursors) during the Girdo Campaign in the Delpha Sector though with little damage, again by the Congregation of the Deathmarch over Mirenton, to the DCP's embarrassment. Most devastatingly, the Horatorio sector was invaded by the Dominatus, and the Paledon and Docron sectors invaded by the Vermulans. The DCP however demonstrated the same ferocity to defend the Horatorio sector as they would before the Maelstrom was created. The Paledon and Docron sectors were minor, but the DCP was also under attack by other forces and was distracted from defence, again however, the DCP was able to retake both sectors using the preparations for siege and the fleet response. Peladon and Docron sectors actually had their maelstrom deactivated to provide the Vermulans with a ruse. Even without a maelstrom, the DCP has shown it can defend its space.

Here is a list of the notable allies, enemies and other encountered races, including a threat assessment on some of them. Please note this is written in the DCP's point of view which doesn't necessarily reflect Wormulon's. The tiers are based on the Tier instruction manual.

Database of Xenotechnological cultures
Retrieved from "https://spore.fandom.com/wiki/Fiction:Delpha_Coalition_of_Planets/Political_relations_and_influence?oldid=685188"
Community content is available under CC-BY-SA unless otherwise noted.