Thugz Fer Dosh is a Loron SMC (subsidiary military company) in the Borealis Galaxy, subsidiary of Da Rogue Boyz and led by the Loron mercenary Gol'thabex. A mercenary group for hire, Thugz Fer Dosh will serve the highest bidder, although once they've tken a job they are often not persuaded to take another organizations' offer.

“Attenshon all da remainin Rogue Boyz peepz in Borealis. We haz jus beeten UNO an yoo betta celebrat in our victory wiv a pizza party or ma boyz gonna shank yas. Anywayz ders gonna be som changes round heer; da Rogue Boyz is nao a PMC, privat military company, of mercenaies an we iz da best mercenary groop dat all da big companies pay top dollar ta hire for dere services. Not much changin jus dat nao yoo betta lissen ta anyone wiv cash. An if yoo dunt liek it yoo can get evry chik an boy in yor gang ta form a line behind me an kiss my ass. Dat is all.”

In the Second Borealis Galactic War's second era, the Coming of the Vague, as the Borealis Consortium Network planned a new kind of business and completely revolutionised society away from the concept of governments and nations and towards a new galaxy governed by war and currency, the Rogue Boyz felt the need to reform, with their now smaller empire.

In the Borealis War's third era, Business of War, the Thugz gained notoriety, and became the top mercenary company in the Galaxy. However, at the end of the era, when the Wrath of Gods began, the Thugz became a subsidiary of the Rogue Boyz, and put under Gol'thabex' command. 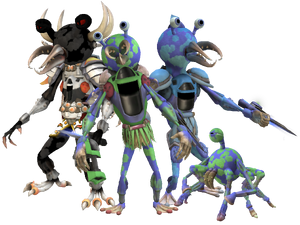 Loron - Thug Loronz are immensely strong, and are more numerous than others. Thug Loron tend to be more cocky than the others, carrying the most bling, and carry medium guns, like assault rifles.

Dark Loron - Thug Darkboyz are near identical to ordinary Loron, but aren't as cocky for being "the original species". They tend to carry the biggest and most obnoxious guns.

Cold Loron - As Thug Coldboyz have their unique ability to spit liquid hydrogen at enemies, and are immensely tough, Coldboyz tend to be the close-ranged fighters of the group, and some don't even carry guns.

Norol - The Thug Norol are all drivers of vehicles (like the Loron Smashas) or plan co-ordinators. Norol found working in kitchens are all Rogue Norol.

Like the other Loron, the rogue Loron are incredibly robust and strong. However, they do not possess The System in their bodies, causing a large disvantage against UNO's Loron. They have, however, had a very large exposure to antimatter and other chemicals, which has made them stronger, as well as immune to the side effects of exposure to them and slightly more intelligent. This arguably puts them above UNO's Loron physically, despite lack of The System.

Thugz Fer Dosh are normally focused on whatever mission they have been given. Whoever signed a contract with the Thugz will have a very loyal group of Loron willing to do anything to get the job done, with the knowledge that there'll be cash and pizza at the end. When not on contract, the Thugz may raid other corporations and warbands, and will often wage proxy wars against other PMCs.

Being regular Loron, Da Rogue Boyz have innnate mentalism powers, which will weaken enemies' adrenaline flow, nerves, and muscles. It is also used by Da Chikz to communicate with them. The Thugz are the toughest of the tough Rogue Boyz, and thus, tend to be a lot stronger in combat, with much sharper reflexes. 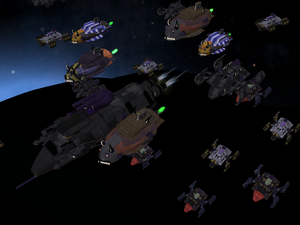 Thugz Fer Dosh technology is a mix of typical Rogue Boyz technology and technology they have bought, stolen or been provided by sponsors.

Thugz Fer Dosh use the Rogue Boyz ships in their fleet; their ships fly using Cold Relays for FTL travel, and particle drives for sublight travel. Their ships in general use zero point energy. The ships also have albative armour for defense, and various other shielding from harm.

Loron Fightaz - Small, fast and agile, fightas are equiped with turbolasers for taking out enemies, and are piloted by Loron so mad for speed they often crash into asteroids and larger ships.

Loron Bommaz - Packed with antimatter bombs and missiles, Bommas can unleash hell upon enemy settlements and larger ships, and pilots will press all the ship's buttons to see which causes the biggest explosion.

Loron Killaz - Frigate ships, the Loron Killas are the most common large ship in Rogue Boyz fleets, and use particle cannons, turbolasers and antimatter missiles to take out other frigate-sized ships; they are 90m long, so they are dwarfed by Sik Ships, but are deadly none-the-less. 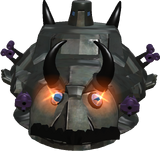 The Thugz are a freelance group, and they tend to use any ships they've either stolen, bought or been provided by sponsors. Notable ones include: 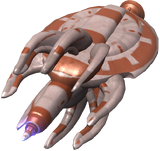 Custom Wranploer Dreadnaught
They also use many others, such as modified versions of Tokzhalan Military Industries drones, to use as starships.

Like ships, the vehicles of Thugz Fer Dosh are the same as Da Rogue Boyz' vehicles; they are incredibly advanced for Loron, and run on zero point energy, as well as having albative armour.

Loron Speedaz - Fast Loron vehicles driven by Loron addicted to speed, Speedaz are known for zooming around the battlefield with jet boosters and firing endless amounts of bullets at the enemy.

Loron Carriaz - Designed to carry around 30 Loron to battle, Carriaz are armoured trucks with few weapons, but huge amounts of impatient boyz screaming for battle inside.

Loron Tankz - Strong armoured fighting vehicles, Tankz are capable of taking on enemies both from a distance and up close, boasting huge firepower and being well armoured.

Thugz Fer Dosh only occasionally use vehicles that aren't their own, as on the War Economy scene, more vehicles tend to be unmanned. As such, there are no notable non-Rogue Boyz vehicles used by the Thugz.

Thugz Fer Dosh use Da Rogue Boyz' devices; the same equipment as the other Loron before they joined UNO, but their version is a lot more powerful. This includes Da Geekz. They also use Worka Drones, which can construct and repair their ships with nanobot builders; this technology was stolen from the Indoctrinate Collective.

While the Thugz technology tends to steer towards Rogue Boyz technology in most aspects, with weapons, it is a different story.

The Loron use the following weapons:

The Thugz tend to use modified Blastas, often more custom fitted than most Blastas. Several Thugz tend to customize their blastas with laser visions, scopes, added grenade launchers and grips, more so than ordinary boyz will. The Thugz weapon of choice is a machine coilgun, firing a speeds faster than ordinary machine guns, and firing incredibly powerful bullets that can rip through targets in seconds. Their custom bomz all tend to use plasma.

Thugz also love to use weapons stolen or bought. They notably use portable turbolaser blasters, plasma guns, as well as electrolasers, against their foes. But really, Thugz can be seen with pretty much any weapon that suits them.

Gol'thabex - An extremely feared and powerful mercenary, Gol'thabex is the current leader of Thugz Fer Dosh. He is feared across Borealis' underground, and is known for his unique fighting style which consists of throwing axes at his opponents.