Vehiclez of Da Rogue Boyz are incredibly dangerous and deadly, for both the pilot and the opponent.

The ships viewed here are the ships with default colours; the ships' owners will go out of their way to colour their ships the way they like, carve their name into it in bold lettering, and many other things to personalize their ships and stand out in the crowd.

The Loron themselves don't need vehicles often, as they are incredibly strong, large and tough themselves. However, there are several things that Loron cannot do on their own. Vehicles are required for this exact purpose.

Since they were introduced, Vehiclez have been found all throughout Da Rogue Boyz' military. They don't make up that much of the military, only about 15% of it. The vehicles often require a huge amount of devotion to drive.

Skateboards, while not a real vehicle, are used commonly in battle.

The Loron skater tradition has existed for a long time, and was originally invented so that Loron could get around towns faster. When one Loron took his skateboard to battle by accident, however, he decided to use it. He road on his skateboard to the enemy, reaching them fast but was shot dead when he got close. Other Loron on this battle thought it a good idea to bring them, and soon many Loron began to use skateboards in battle.

Loron boyz often use their own skateboards/rollar skates, as it is part of their addiction to speed. These are not really vehicles, more items. Many skateboards are outfitted with machine guns and smetimes rocketboosters, and many other modifications more often than not impractical.

Speedaz are incredibly fast Loron cars. They can outmanouvere almost any land vehicle, and fulfil Loron's addiction and need for speed.

Being developed in Da Moovment, Speedaz were developed when the United Nations of Ottzello hired them to fight the New Kralgon Empire. Speedaz became used in the Rogue Boyz military frequently ever since, and were improved by Tralkikianoe technology to give them zero point energy.

The Speedaz are incredibly fast vehicles, that are essentially cars with machine guns. They have machine guns which fire dozens of exploding bullets in almost no time, and antimatter rockets which home in on enemies and wreck havoc to anything they hit. However, many Speedaz simply run over enemies, and their speed and chaos of charging around can be chaotic to enemy forces.

When Da Chikz get too old to give birth anymore (often between 20-40 years time), they will die the next few years afterwards, not to mention become useless. As a result, they will wire themselves into this huge walker, to serve the military instead.

Loron themselves are often not fast enough to reach the enemy, or rather, don't trust themselves to charge. With Carrias, not only can they do so in style, but they have armour. 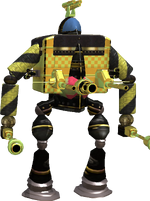 The Propa Big Rogue Tank is by far the strongest vehicle ever developed in Loron history, and is made based on scavenged technology from a powerful race known simply as "Them". It is used by Naktor'zak, who tends to go mad with running over enemies, using rocket boosters and firing simply all weapons the vehicle has.