The shipz of Da Rogue Boyz are the most powerful ships by a Loron empire in history, mostly thanks to the Tralkikianoe and Borealis Consortium Network technology in them (see the main technology page of Da Rogue Boyz). Their ships are seen as similar to sentient organisms, although not completely sentient.

The Loron ships, originally, weren't too powerful, and were mostly based on other space faring' civilizations ship, which were merely stolen. It took a long time before Loron Mekkas and Tekkas could develop starship weaponry on their own, simply by manipulating what empires they'd stolen from did to make their own weaponry. They would continue to steal from other empires, until they were satisfied with how powerful their own ships would be against others.

The Propa Big Loron Empire began to develop strong starships during the DCP/Loron War, due to the strength of the Delpha Coalition of Planets' Fleet (while weaker at the time, it was far ahead of other civilizations in the Ottzello Galaxy. Their first ship was Da Killa. The Propa Big Loron Empire's ships were based off stolen DCP technology, until it failed to work for them. Instead, the Chikz developed some weapons based on the DCP's weapons, such as antimatter.

Later, when the Second Ottzello Galactic War resulted in the Propa Big Loron Empire being enslaved by the Kralgon Invasion Force, their ships were discarded and deemed unnecessary, as the Kralgon were using more powerful ships. When the Empire joined UNO in the Unified Nation of Ottzello, they simply used UNO's fleet. However, while this had happened, the Da Rebellion had occurred...

Later, the Rogue Boyz' own iteration of the Killas was created, around the time the Loron fought Zalk'don. Shortly after, when preparing to fight the Indoctrinate Collective to reach Dark Gratz'kaoz' stronghold, they developed the Fightas and Bommas.

Zero point energy, antimatter, quantum replicators and particle cannons were among the things the Tralkikianoe brought to the Rogue Boyz' ships for improvement, at around the time of Da Rampage. Their weapons were used to make the Loron ships ultimately a lot stronger than any other Loron ships in history, and became similar power to UNO's Fleet.

Later, as part of a deal with the Borealis Consortium Network, the Borealis Consortium Network provided them with plasma cannons, and improved the inner circuitry and power distribution, as well as providing their drones and Loron builders with the abilities to make better shapes if ships' insides and outsides, as well as not only albative armour, but regenerative albative armour. Thanks the Tralkikianoe's quantum replicators, they could create any material they wanted just with another.

The ships viewed here are the ships with default colours; the ships' owners will go out of their way to colour their ships the way they like, carve their name into it in bold lettering, and many other things to personalize their ships and stand out in the crowd.

Loron fleet is only used for one main purpose: Da Massiv Crewz. They are in such large quantity (thanks to Da Worka Dronez constantly building them, and quantum replicators given to them by the Tralkikianoe), it makes up for the fact that they aren't the most powerful ships compared to other empires.

Rogue Boyz ships are often seen as similar to sentient organisms, in that they have nanobots to work like blood cells, and a Geek (AI) to work like the brain. The ship's zero point generator also serves as the ships' heart, and any other internal parts of the ship work like bodies' internal organs. Also, their ships' armour replicates in a way similar to organisms' skin repair. The ship's AI is also capable of speaking to the Loron. For this reason, some Loron tend to view their ships in a similar way they view boyz; this is often the case in Loron pilots, and sometimes old leaders who have become emotionally attached to their ships.

The fleets' composition depends on its use. If in defence, there often won't be many, as Da Rogue Boyz prefer using space stations for defence. If in offence, it is nearly always used in a Massiv Crew, and thus, the leading ship is a special ship. An example of a special ship is Da Propa Big Rogue Krooza.

The crewmen in larger ships are either passengers - boarding the ship to land at another planet and invade - or pilots. Pilots are the Loron who pilot the ships' movement, which is dictated by the warboss/Big Warboss(es) on board. There are also gunmen and engineers. Gunmen are volunteers from the passengers who commandeer the many turbolaser cannons and the larger weapons of the ship, while engineers are either Mekkas or Tekkas who, working with the ships' AI and nanobots, keep the ship in check. Both gunmen and engineers, however, are roles becoming less necessary, due to the improving AIs of the ships; engineers aren't such a common job, while many passengers still volunteer as gunmen.

Most of the shipz use particle drives for sublight travel. For faster-than-liht ravel, however, they use the same travel as required for Cold Relays. However, only medium and large ships can perform faster-than-light travel; smaller ships need to board larger ships.

The regenerative armour works when the ship's AI uses quantum replicators to automatically replace armour. The ships' nanobots will also regenerate and replicate by absorbing material weapons, rapidly change the shape of the armour to deflect most of the energy of laser and charged particle weapons and absorb the rest of it to recharge themselves, and most importantly, defend against nanobot attacks. This has been seen as similar to a sentient organisms' skin repair, and thus, is another thing that makes Loron ships comparable to sentient organisms.

The Fighta is a Loron starfighter, which is a fast and agile ship.

The Bomma is a Loron starfighter with missiles, that is designed to bomb enemy starships, as well as planets.

The Killa is a ship that is one of the Loron's oldest ships, but Da Rogue Boyz definately have the best version. Their version of the Killa is more powerful, longer, and much tougher than incarnations by older Loron empires. 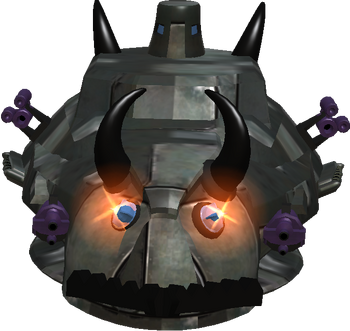 The Sik Ship is the most common form of Loron capital ship. All Loron Big Warbosses own one, merely to show off their strength compared to others. 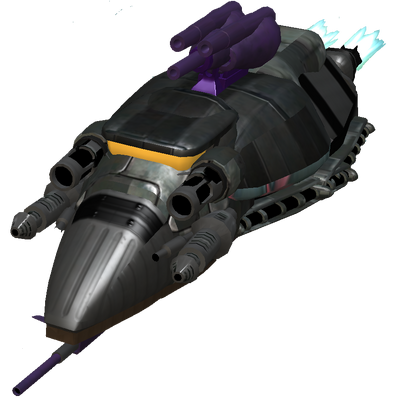 Da Propa Big Rogue Krooza is the private ship of the leaders of Da Rogue Boyz. It is the most crucial ship in Da Rogue Boyz' history. It was created during Da Rebellion, at Fre'kloar's request to have a ship more powerful than Zr'Ahgloth's. After a lot of effort, his ship was created, and was the most powerful Loron ship in history. After improvements from the Tralkikianoe later, it retained this title.