Perils of Ottzello
“WE IS DA BEST EVA. WE WAS DA FIRST LORON EMPIYA SO WE SHULD BE DA DOMINANT ONE. WE IS GONNA SMASH ALL DA LOSAS DAT OPPOSE US!!!!!!!!!”

The Propa Big Loron Empire are particularly important to the history of the Loron. Responsible for the creation of many warships, such as those now found in Da Rogue Boyz Shipz, as well as the expansion of Loron technology to a point where it could slightly match other Ottzelloan empires, the Propa Big Loron Empire cemented the Loron as a galactic, and universal, threat to stability and peace with Loron growth to the stars. Though its technological advantage over splinter Loron empires did not last long, as many of them stole and took over their technology quickly, the Propa Big Loron Empire is still notable for being the first empire to pose a major threat to the galaxy with their numbers.

The Propa Big Loron Empire existed as an idea since the rule of Flak'Toha, as the concept of uniting all the Loron on Groodrub under the same rule. Flak'Toha adopted the name once his civilisation conquered many other Loron settlements on the world. Many other Loron initially found the concept laughable, though underestimating the momentum of the empire often led to their downfall quickly. The Propa Big Loron Empire eventually conquered every corner of Groodrub.

With the help of Chikz and Geekz, the Propa Big Loron Empire was eventually able to construct spaceships which could leave the planet and settle on new worlds. Their discovery of hyperspace led to a much faster expansion around the galaxy.

The Propa Big Loron Empire sent colonists around the galaxy, although Loron often forgot to check back with the empire. This led to fragmentation when many Loron colonies were no longer associated with the Empire. In his frustration, a new boss, Krul'Takka, who was possessed by Durzhan, backstabbed Flak'Toha and took over the Empire. He initially ordered a much stricter control of its colonisation program, and far fewer Loron colonies were disassociating with the empire.

However, the situation would rapidly change during later years. The Propa Big Loron Empire's unique Loron technology and starships were being stolen and robbed by other Loron factions, meaning they soon were no longer unique to the Propa Big Empire. Furthermore, Krul'Takka was defeated in combat by a young child prodigy, Zr'Ahgloth, a former slave who went on to become a hero of the Loron people. Zr'Ahgloth's status as Propa Big Boss led to an immediate reverse of all of Krul'Takka's changes, which he felt had betrayed Loron cultural tradition, and began the first wars.

With its enormous and constantly growing size, the Propa Big Loron Empire began a war by attacking the Galot Republic unprovoked, perceiving them to be the weakest empire. This was met by a very negative galactic reaction, where the vast majority of galactic powers declared war on the Loron, beginning the First Ottzello Galactic War. Many civilisations did not respect the sheer size of the Loron Empire, and most were used to fighting off smaller Loron factions with much weaker technology. The Loron spread to become by far the most populous species in the galaxy, with control over the largest number of planets.

The First Ottzello Galactic War ended not with a treaty, or the defeat of either faction, but when the Loron encountered the Delpha Coalition of Planets. Their greatest foe so far, the Loron were drastically outmatched by the DCP's incredibly advanced superweapons, while the DCP found themselves far outnumbered. The Delphan Excavation War of Ottzello did not drastically favour either side at first, though casualties were high on both sides. Furthermore, the Loron were involved in the March of the Apocalypse in the War of Ages, against the Xhodocto, in an attempt to defend the universe. Though they made peace with many other aliens they would not ally with again, the Loron were proud of their involvement.

The Delphan Excavation War of Ottzello ended when, once again, the state of the galaxy changed, when the Kralgon Invasion Force began the Second Ottzello Galactic War. The DCP left the galaxy, feeling it was a lost cause, while the Loron focused on a new threat, the Third Sovereign Domain.

The Propa Big Loron Empire was defined by being the most expansionist empire among the Loron at the time. It was mostly concerned with expanding across the entire Ottzello Galaxy and did not have any other major goals. Though the Loron would often attempt to drive enemy species into extinction, these were more for its own goals of extending its reach around Ottzello than they were about necessarily detesting a certain species.

The Propa Big Loron Empire was openly hostile, but often without reason.

The Propa Big Loron Empire's "government" was the typical Loron "boss" hierarchy. This is a cultural Loron hierarchy in which the "boss" of a certain area, or a certain role, reigns supreme, as those under him either respect him or cannot challenge him. The "Propa Big Boss" was the supremely ranking Loron above all of these, which had an authoritarian control over the other Loron, and any boss under him would answer directly to him.

Propa Big Loron technology was, at the time, the most advanced Loron technology that existed. This was largely due to its desire to generally have better equipment than other Loron factions at all times. Loron equipment would often be looted from other alien factions, meaning that many Loron starships attached weapons which were not "standard" or mass-produced. However, this was not always the case, as there were many occasions in which Loron could understand and mass-produce weaponry under guidance of Da Geekz AIs.

Leftovers of Loron technology can be found within Rogue Boyz technology, though the Rogue Boyz have since expanded on it greatly.

The Propa Big Loron Empire's warfare was known for being the most co-ordinated of any Loron faction at the time it existed, with the exception of Loron under Gratz'kaoz. By having several bosses co-ordinate Massiv Crews, their fleets would spread around and conquer the stars. As these fleets would always answer to the higher bosses, there were no questions of loyalty.

Remnants of Propa Big Loron Empire ways of fighting can be found within Rogue Boyz troopers.

Propa Big Loron Empire society never deviated greatly from that of a typical Loron empire, other than under Krul'Takka. Under Krul'Takka, there were several Loron police forces which would enforce various rules, in an attempt to create a fairer and safer society. However, these rules were largely detested, and many police themselves did not agree with upholding the rules, making them very corrupt.

The society of the empire was straightforward, in that there were no real laws, and no regulated education, meaning that the Loron simply had to get by on their own, finding their place in society by proving their worth to a boss, or by beating up a boss and taking over. This meant that the Propa Big Loron Empire society was just as chaotic as any other Loron faction.

The Propa Big Loron Empire greatly worshipped Roz'Tah'Flok, who was believed to be the supreme ruler of the Loron godz. Their worship of Roz'Tah'Flok continued when within the Unified Nation of Ottzello. As the Propa Big Loron Empire did not have any organised religious movement, churches or religious bosses, there were no real regulations, and many Loron forgot their god names. 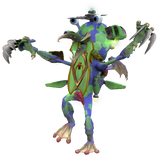 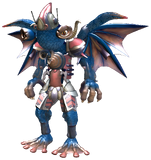 “who even is yoo”

“And these make up for a good excuse for our people's lack of interest in Ottzello. Who would want to settle in a galaxy dominated by barbarians?”

“one day... I WILL DEFEET YOO AND BECOME DA PROPA BIG ROGUE BOSS. JUS YA WAIT!!!”

“YOR NO MATCH AGENST ME. I WILL BURN YOR EMPIRE TO DA GROUND AND EET YOR BOSS LIKE DA DOG HE IS”

“How fortunate, for both us and them, that the unkempt hounds have, at last, been tamed and leashed.”

“In them, I see but a glimpse of our kind... Insight into the most foul and wretched aspects of our zeal and ire. I would deem them not warriors, for such is too undeserving a compliment, but little more than barbarians. Exceedingly potent barbarians, at that.”