New Cyrannian Republic
“From these stars, the New Republic will rise like a phoenix from the ashes!”

Coru Secundus is a galactic region of the Cyrannus Galaxy, located to the galactic east of the Core. Though the western fringes of what would become Coru Secundus were colonised in the distant past by First Republic settlers, the vast territories located beyond the galactic core were fraught with astrographical hazards, thus hampering widespread exploration. As such, Coru Secundus was lumped together with the "Unknown Regions", prior to the Great East Manifest of 03 NE, when the New Cyrannian Republic began extensive colonisation and exploration efforts in the largely unsettled territories beyond Imperial borders. Rechristened "Coru Secundus" — Second Core in old Oenòeni — the region became one of the most prosperous in Cyrannus. Though Coru Secundus is sparsely populated by native intelligent life, the Anthori Libertus of Coruanthor established a large number of colonies such as Coruaan, Thaehos and Angrenos, while other species such as the Lacertians and the Mon Nahdar also held sway over significant portions of space, before being united under the New Republic.

Though isolated from wider galactic history for millennia, Coru Secundus would face open warfare for the first time in centuries when the Neraida Gigamatrix launched a devastating invasion of Republic holdings in the region, cutting a swath through Coru Secundus which took many years to heal. Though the Neraida were ultimately defeated far from the stars of Secundus, war would once again spread to the region, when the Galactic Empire of Cyrannus and the New Republic became embroiled in the Second Great Cyrannus War. Coru Secundus was a key battlefield during the opening stages of the conflict, with Republic, Cognatus and allied forces united in opposition to an overwhelming Imperial invasion led by Admiral Tharnak Adraci.

The region was initially explored and colonised by Libertus explorers from the First Republic, ultimately leading to the establishment of colonies such as Coruanthor and Coruaan. After the fall of the Old Republic, these colonies tended to remain independent nations in their own right, only joining the wider galaxy with the creation of the Republic. The Coru Secundus region was named and mapped by Cyrannian members of the Universal Trading Union soon after the formation of the New Cyrannian Republic in 03 NE to serve as the nucleus of Republic space in the Cyrannus Galaxy. Coru Secundus made up most of the Odysseia Region, though unlike other areas of Odysseia, it is almost completely controlled by Mou'Cyran, with the edges of the region bordering the Rihanae Pact, the Icolian Assemblage and the Galactic Empire of Cyrannus. When the New Cyrandia Wars broke out, the Republic secured the borders of the region against the threat of invasion.

“A map of Republic sectors and those of nearby powers.”

Coruanthor is a city-world located within the Coru Secundus region of the Cyrannus Galaxy, along the Republica Trade Route between the New Cyrannian Republic and the Galactic Empire of Cyrannus. Though the city-world is smaller in size and scope than Orbispira, the planet is nonetheless the hub of the Coru Secundus region as well as the largest and most populous planet in the Cyrannian Republic. The planet is largely ruled by two families, the House of Capulex and the House of Maraenn, both of which lived in peace until the end of the Great Cyrannus War and the subsequent formations of both the Republic and the Empire. While the Capulex Family supported joining the Empire, the House of Maraenn supported joining the Republic, resulting in a power struggle that ultimately resulted in the ascendency of the House of Maraenn and Coruanthor joining the Republic.

Aside from the political machinations of House Maraenn and House Capulex, Coruanthor is known across the galaxy for the high-end lifestyle of most of its inhabitants, as well as being a mecca for artistic experimentation and the art-deco style of many of its most famous buildings. However, like so many cityworlds, a criminal underworld exists on Coruanthor led by Cyrannian Loron mafia groups as well as the enigmatic Cyrannian Syndicate, both of which seek to profit from the political uncertainty that the planet finds itself in. 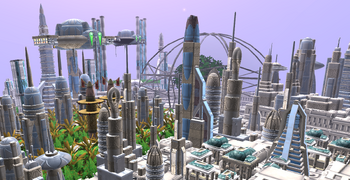 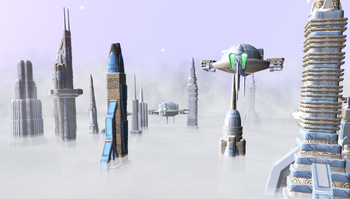 Caelis'caeri is a gas giant located in the Caelis System along the Republica Run, the primary hyperlane of the Republic's central territories. This prized location aided in the development of the planet as a wealthy world known for floating cities and mining complexes in the thin layer of habitable atmosphere surrounding the planet. Due to the planet's close proximaty to Coruanthor, it was once a member of the Coruanthoran Principality, before both states joined the New Republic as equals in 03 NE.

The capital of the planet is Caelis'orbi, a bustling floating metropolis which orbits the planet's northern pole. The city is a key military rallying point for the Republic Navy during patrols of the Republica Run, with vast fleets of Republic vessels being a common sight from the city. The planet is represented in the New Republic Senate by Senator Nexarón Valkistair, a Trucinex politician with ambitions for the Presidency of the Republic.

Coruaan is a planet located along the Republica Run trade route in the Cyrannus Galaxy known for its long history in the service of the democratic governments of the galaxy, from the Old to the New Republics. Though located outside the Cyrannian Core Worlds, Coruaan is very much a planet with strong Core-sensibilities, sharing a similar culture and opulence. A long-time competitor to Cyroenia for the title of having Cyrannus' largest shipyard, since the beginning of the Imperial Era, Cyroenia has far outstriped the capabilities of any other shipyard in the galaxy, though the people of Coruaan remain proud of their status of holding the title of the second largest in the galaxy, being responsible for the building of many ships in use by the New Cyrannian Republic. 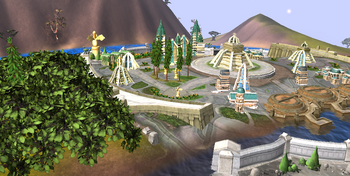 “Today, we claim this planet as our own. A refuge in the darkness of space from which we will cast off the shackles of the past and look up into the stars above confident of the new era of peace we have embarked upon. On this site, we will build a new city that will function as the nucleus of our civilisation. However, there is still much we can learn from it. Who lived here eons ago? What became of them? What new worlds and civilisations await us beyond the atmosphere? Together, I hope we can discover the answers of these questions and begin a new life.”

Mou'Cyran (Old Capricaerónn: New Cyrannus) is a temperate planet located in the Coru Secundus Region of the Cyrannus Galaxy that serves as the mysterious capital of New Cyrannian Republic. Located close to both Jenassian and Regellian space, the planet is under heavy Republic protection. However, they have failed to notice an Icolian Assemblage base underneath the planet's surface. The colony is home to many secrets that are only now coming to light.

Unlike the ecumenopolis of Orbispira, the cities of Mou'Cyran are small with much of the planet consisting of alpine mountain ranges, lush forests and gleaming seas. The planet has a distinctive violet atmosphere due to the presence of a nearby nebula, giving the planet a serene beauty. However, the planet also hides dark secrets, many of which began to come to light once the planet was colonised. 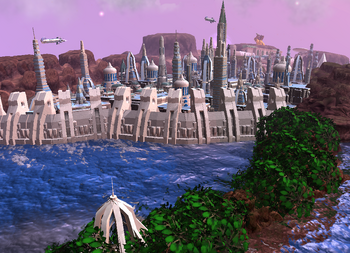 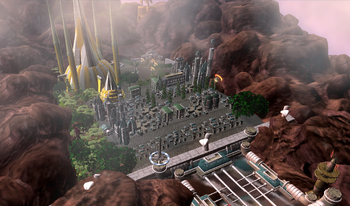 Venetia is a planet in the Coru Secundus region of the Cyrannus Galaxy and an Ermitant colony loyal to the New Cyrannian Republic. Founded in 03 NE, the Ermitant loyal to the ideals of their own fallen republic hoped to build a new life on the planet away from the nefarious forces of the Bisistar Domain. However, the Bisistar soon found the planet, sparking the Great Battle of Venetia, a cataclysmic conflict between the Bisistar and the united forces of the Pax Infinitus Armada of the Mou'Cyran Accords, the latter of which was ultimately victorious. 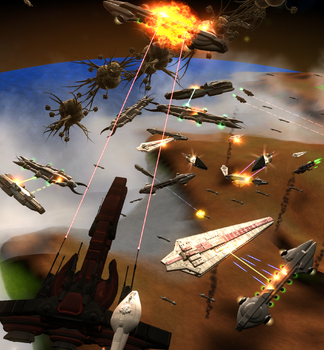 Nivenia Prime is a planet in the Coru Secundus region of the Cyrannus Galaxy and the capital of the Nivenian Empire. It is a small planet, but is completely covered by five layers of city, stacked on top of each other. The planet only does not overheat because of the huge air-conditioning and heat transfer system that pumps all of the heat to giant radiators visible from space. Nivenia Prime mainly exports law, precision machinery, and electronics, and imports food, ammonia, and raw materials.

Currently, the economy of Nivenia Prime is booming due to the recent discovery of the Nivenian Empire by the New Cyrannian Republic and JCompany and the new markets for Nivenian stuff. Interestingly, the weather on Nivenia Prime is completely determined by the Nivenian Empire Board of Weather Control, which usually tries to maximize productivity. Currently, the planetary thermostat is kept at 22.50 Celsius, but every few months some industrial accident or terrorist group ruins the atmosphere for a few days, forcing everyone to stay inside. However, everyone is used to this, and the planet has mechanisms for cleaning the atmosphere.

True to its name, Coru Secundus is similar in many respects to the Core Worlds due to the Libertus being dominant in both galactic regions. However, unlike the Core which is the heart of the Galactic Empire of Cyrannus, Coru Secundus is the heart of the New Cyrannian Republic, a fact that can be seen in the strong support for the democratic tradition amongst the inhabitants of the region. A centre of the arts, culture and technological development, the Coru Secundus is arguably the second most prosperous Cyrannian region, containing the key Republica trade route, which links the Republic to the Cyrannian Empire, Rambo Nation and the Allied Terran Republic, amongst others.

“It's a place of growth and positive change for the Cyrannus Galaxy. Still, I miss Capricaerón and the other Colonies. Sometimes I really hate that Empire...”

“Soon, there'll be a new guy in charge.”

“A hot-bed of anti-Imperial bile. Were it not for the Emperor's will, it would already be under Imperial control.”

“This is the only place we can call home, for we've been kicked out of everywhere else. We by no means treasure it any less.”

“It is an interesting area, to say the least. I would like to visit the cities, where I not 50 meters in height, and several thousand tons of armor and muscle.”

“A new beacon of hope and peace, of prosper and wisdom! Hope it will be spared the horrors of war” 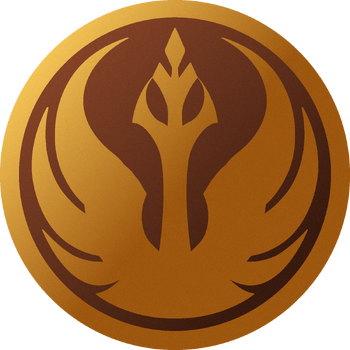 The New Cyrannian Republic: The dominant power in the region. 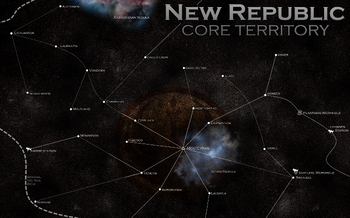 A more realistic map of the region.