“A powerful band of criminals and outlaws, whose reach stretches far beyond the Outer Rim. One of the few similarities between the Republic and the Empire is our opposition to these vagabonds.”

The Cyrannian Syndicate is an underworld criminal organisation in the Cyrannus Galaxy currently led by Aiora Xaeymea. By far the most powerful underworld consortium in the Cyrannus Galaxy, the Syndicate is well known for criminal and illegal acts against the galactic laws adhered to by both the Empire and the Republic. Formed nearly nine millennia prior to the Great Cyrannus War, the Syndicate's reach has since spread through the galaxy and into the galaxies of the Outer Gigaquadrant, making notable deals with both the Quadrantia Syndicate and Xonexi-based pirate groups.

The origins of the Syndicate stem from Orbispiran Mafias in the early days of the Federation of United Worlds. Over time, many of these crime families united into larger and more successful consortiums, most notably in 8950 BNE when the Cyrannian Syndicate was officially established. Before long, members of this pact met with partners in the Outer Rim of Cyrannus, particularly on the once opulent city world of Tar Kuuraen, whereupon the Syndicate established its official headquarters away from the prying eyes of the Federation. Over the centuries, the Syndicate would follow in the footsteps of Cyrannian civilisations in exploring the Gigaquadrant often coming into contact with fellow criminal organisations such as the Quadrantia Syndicate.

Flovos Pretio: "I expect a hefty sum in return for this geopolitical calamity I've concocted."
Tyermaillin: "And you shall receive it when I am content that they have destroyed one another to a sufficient degree."
―Pretio and Tyermaillin discuss their conspiracy during the New Cyrandia Wars

However, when the Galactic Empire of Cyrannus was formed, the Syndicate fell into a slump when it's leader, Flovos Pretio was captured. In the meantime, the devious and greedy Rivergron, a high ranking member of the Syndicate rose to the rank of Mandator in the Empire, providing him with great wealth and power, while also giving the Syndicate a great deal of insight into the inner workings of Tyrómairon's new order. However, with many Imperials beginning to grow suspicious, Rivergron decided to lay low until the time arrived when the Syndicate would rise again.

Later, in the second year of Imperial rule, Flovos Pretio managed to escape the Imperial prison ship, Constrictor, with the help of his trusted lieutenants. However, the ease of his escape haunted him, and he began to grow paranoid that the Empire sought to control him. Promising himself that he wouldn't let them, Pretio managed to meet up with Drelas and Rivergron on Lokria Resort, a space station hiding one of the Syndicate's key centres, while there the trio decided that the Syndicate needed more firepower and set about finding an experimental Imperial warship. Eventually, the Syndicate managed to gain control over three Aggressor-class Destroyers, cementing its place as the most powerful criminal force in Cyrannus, aided by their new alliance with the Panthrea Slaver Guild. During the third year of the Dark Times, the Syndicate became involved with their criminal counterparts of the Quadrant Galaxies, such as Morglûkia.

During the New Cyrandia Wars, the Syndicate began to engage in more overt actions, displaying their newfound power to the galactic civilisations of Cyrannus and the Quadrants. During once such incident, Flovos Pretio was personally hired by Adelheidis and Zare'Anne to disrupt peace negotiations between the Empire and the Confederacy of Free Planets in order to destabilise the galaxy and paint the Republic as those responsible. However, the timely intervention of the Adjunct on the Republic Dreadnought Sword of Peace successfully foiled the Syndicate's plot, though their efforts in this nefarious plan were far from complete. Later during the wars, several bounty hunters operating under the Syndicate were contacted to undergo a joint operation with the Vengeful Claw and the Syndicate of Quadrant 82 in the hopes of assassinating political leaders such as Apollo, Ramashe and Maryah. Though the bounty hunters successfully broke into the Rambo Palace, they failed to kill the leaders.

The Syndicate was later contacted by the leader of the Cyrannian Imperial State, the self-proclaimed Imperator Tyermaillin, who sought to use spark a conflict between the New Republic and the Empire to provide respite from continual Imperial strikes against space loyal to Vasuband. Both Pretio and Rivergron travelled to meet with Tyermaillin, sparking a vast conspiracy to ignite the animosity between the reigning superpowers. The plan likely would have succeeded were it not for the intervention of the ambitious Ausare crime lord Aiora Xaeymea, who revealed the conspiracy's existence to both the Imperials and the Republic. In the aftermath, Xaeymea usurped control over the Syndicate, and spent much of the next decade consolidating her power.

The troopers employed by the Syndicate are mostly demolition experts, assassins and ordinary soldiers abandoned by their respective governments. The Syndicate Troops only operates together as a unit in certain situations. Syndicate Troops forces can range from simple soldiers with heavy armour to cybernetic supersoldiers, with many soldiers being genetically engineered mutants. The Syndicate Troops are also a mercenary group, working for the highest bidder. The Troops don't go through any specific 'recruitment', besides from planets that are purely Syndicate property. Anyone who learns of the Syndicate is captured, and either forced to work for them, or killed should the individual refuse. Members are selected for their roles by the higher ups; whether Syndicate affiliated individuals will be smugglers, members of the Troops, bounty hunters or another profession is decided by the higher ranking officials.

The Cyrannian Syndicate's main 'war' force are made up of outside mercenary forces, both Cyrannian and extragalactic. The forces that the Syndicate hires will depend on how trustworthy the mercenary supplier is, the 'budget' of the operation (many higher ups in the Syndicate set budgets for certain tasks and ways to complete them), and how efficient the soldiers are at the desired job.

Syndicate starships are owned and produced either by the Syndicate themselves, or bought from another developer, or in some cases such as the Aggressor-class, stolen. They are used for 'military' purposes, for assassination, for piracy and for certain individuals' own purposes. In most cases, members of the Syndicate are responsible for their own ships. The crew members of ships are either slaves, volunteers or selected individuals.

The main world for Syndicate operations is the shady ecumenopolis of Tar Kuuraen in the Outer Rim of the Cyrannus Galaxy. However, in most populated worlds in the Outer Rim, as well as many extragalactic locations, the Syndicate has hideouts. These can be in cantinas, in what would appear as civilian houses, or as otherwise inconspicuous establishments. The hideouts are used to manage Syndicate activity on that world. Discovering the locations of these hideouts is difficult, as non-affiliates of the Syndicate are often killed.

Syndicate bases exist mostly in space stations. These space stations tend to be star resorts, with hotels, casinos, arena battles and are generally high class. However, this is a good place for the Syndicate to find new recruits; in the gamblers and the arena fighters, as well as the general travellers stopping for a rest. While the majority are space stations, many Syndicate bases exist on populated worlds mostly found in the Outer Rim. There are even known cases of bases existing in Inner Rim and Mid Rim locations. These bases are similarly resort locations, or disguised as military training bases.

Syndicate palaces exist in many worlds in the Outer Rim, which are full Syndicate territory, and are owned only by the highest ranking individuals. From here, all operations are directed in the galaxy, and guests can enjoy high class activities.

“We could do business”

“One of my goals as president was to end this little band. Clearly such a deed is harder than I thought.”

“We have connections beyond anything you may imagine. The Syndicate's eyes are everywhere, our profits forever in motion, our plans unstoppable. For mere governments to try and stop us is folly.”

“Ridiculous rabble. The only sentence for criminals in the Tyranozark Stratocracy is complete annihilation.”

“We'll see how your 'Syndicate' goes once I stomp your leader's brains out.”

“Ahh, what a nice little organazation.” 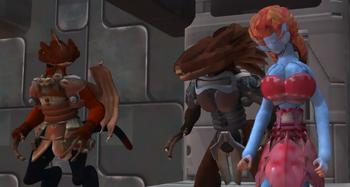 Retrieved from "https://spore.fandom.com/wiki/Fiction:Cyrannian_Syndicate?oldid=768974"
Community content is available under CC-BY-SA unless otherwise noted.