Start a Wiki
Cyrannian Cold War - To Catch a Senator 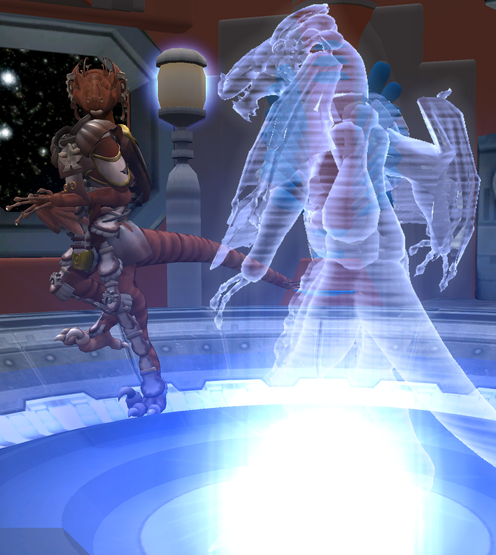 Cruising through hyperspace along the Republica Run, the starship Consular's hull, adorned in diplomatic red, shimmered against the blue void of hyperspace. Inside the vessel, Apollo sat cross-legged at his desk, looking over some paperwork in preparation for the upcoming special session of the Senate on dealing with a third wave of expansion into the Unknown Regions. Suppressing a yawn, the Senator rose from the desk and was about to activate some classical music, when suddenly, a flashing light on the desk indicated that someone was attempting to contact him. Reaching to activate the holocommunicator, Apollo straightened his creased suit and indicated for Gorf to stay as quiet as possible. In the centre of the circular holotable appeared a blue-hued image of President Nexarón Valkistair, who stood with a characteristically emotionless expression with his clawed hands clasped behind his back.

Apollo's expression betrayed his surprise. Of all the people in the Republic, he had not expected to be speaking to Nexarón Valkistair. Gorf, who paid little mind to the situation, spent his time playing with a ball of yarn by throwing it up and down.

Nexarón Valkistair looked at him for a long moment before continuing.

Apollo was about to say something, but stopped and began again.

Apollo sighed, glancing at Gorf as if he would say something helpful. The creature glanced back but replied merely with a shrug.

Apollo knew that Nexarón Valkistair would not appreciate the joke in reference to the upcoming Presidential Election, though suspected that the wily Trucinex was attempting to deflect a political crisis to one of his potential rivals. Indeed, the President merely blinked, before continuing.

Apollo ran his hands through his feathers with a loud "ugh", before turning to Gorf.

Apollo nodded emphatically as he slumped into his chair, only to be roused almost immediately by the holocommunicator once again. Once again groaning loudly, he was surprised to see that it was from a smaller ship requesting permission to dock. A hologram of Doctor Dané Elenya appeared, with the female Libertus wearing the distinctive uniform of Republic Strategic Intelligence, an organisation he knew that she had recently joined as a consultant of sorts.

With a beaming smile, he outstretched his hands, pleasantly surprised to see his friend.

Greeting both Apollo and Gorf with a hug when she entered the ship's airlock, Dané began unloading a torrent of information about her new position as an informal agent of Strategic Intelligence, balancing her career as a xenoarchaeologist and complaining about Imperial scholars who rejected her evidence that Conkobol was the birthplace of the ancient Libertus that founded the ancient First Republic. After what seemed like at least half an hour, she concluded.

Dané blinked for a minute, clearly under the impression that her presence was expected.

She looked between Gorf and Apollo and grinned broadly.

Apollo, who did not have a particularly pleasant memory of the experience, what with coming into contact with Zillum, Tyrant, Emperor Tyrómairon and the putrid saliva of a Ryderallo monster, merely gruntled in response.

She clapped her hands together excitedly.

Dané, who rushed to the cockpit in excitement about her first uncover mission, neglected to hear the comment.

Turning off the Republica Run, the Consular traveled spinward toward the Unknown Regions, on the fringes of which hung the Rihanaen homeworld of Rihanae. When the ship entered the Daeihre Sector, they suddenly detected an emergency transmission from the planet. The holographic image of a young female Cargura appeared, fear and apprehension contorting her soft features.

Apollo stood within range of the holotransceiver.

Gorf sniggered to himself, but Apollo brushed off the comment.

The hologram of the frightened young Cargura disappeared, just as the Consular transitioned into realspace in orbit over Rihanae. There, the disabled Republic corvette drifted through space, the red hull dotted with energy burns. In the cockpit, Doctor Elenya looked in surprise that there were no ships in orbit over the planet, be they civilian or military. The Consular slowed as it approached the docking hatch, with a loud thud indicating to the passengers that the two ships had successfully docked with one another. Grabbing his trusty Presidential Pistols from his years as President of the United Republic of Cyrannus, Apollo fastened them to his waist, just as the Adjunct suddenly materialised in front of him.

The ancient Oikoumene AI continued to bob up and down in the air, his sole eye darting frantically between Gorf and Apollo.

Armed with a blaster rifle, Doctor Elenya appeared from the cockpit.

Part IV: Horror on the CorvetteEdit

The hatch opened, revealing the luxurious interior to the Republic corvette, which was surprisingly empty. With the Adjunct bobbing silently behind them as they made their way through the corridors, Apollo, Dané and Gorf worked their way toward the docking bay console that Arasah-Nui mentioned in her transmission. When they arrived at the console, Doctor Elenya began interacting with the holographic display unit, attempting to find the lock to the cargo chamber. Suddenly, a female automated voice sounded.

Facing the door, Gorf inhaled for a moment before launching a gold ray of energy from his mouth at it to tear it down. In the centre of the cargo bay, Senator Tanarr-Nuin, an elderly male Cargura, was slumped on the ground, though clearly still alive. Nearby, a group of other senators, many of whom Apollo recognised as members of the Eastern Borderland Alliance were trapped behind portable energy fields. Standing with his hands folded behind his back was a crimson Basileus with a dark hood, while in front of him stood Arasah-Nui, pointing a blaster at his head.

Vandalion let out a short laugh.

He looked around the room malevolently.

In a flurry of movement, Vandalion activated his blade and darted toward Tanarr-Nuin, decapitating the old senator in a single cut of his blade. Screaming with horror, Arasah-Nui unleashed a clumsy volley toward the Inquisitor, though he was too quick, deflecting them effortlessly. Apollo and Dané also began firing their weapons, to no avail.

To their shock, with a mere movement of his hand, Vandalion knocked the weapons out of Apollo and Dané's grip. Suddenly, the Adjunct's central eye became charged with energy. A beam of brilliant light erupted from the AI toward the Inquisitor, who managed to contain some of the blast by erecting a small shield with his hands.

With her brilliant blue eyes filled with tears, Arasah left her father's body and rushed toward the imprisoned senators. Though Vandalion noticed her escaping with his captives, he was struggling to hold off the Adjunct's attack. The building energy between them began to cause the cargo bay to shake violently, before finally an explosion of energy from Vandalion tossed everyone to their feet, just as Arasah and the other Borderland senators escaped. Collapsed in a heap on the floor, Apollo cradled his head only to see Dané succumb to unconciousness, the Adjunct fall to the ground in a deactivated state and Gorf standing on his head, letting out a continuous high-pitched scream. In the distance, Vandalion appeared injured as well, giving him the chance to send an emergency transmission. Holding up his communicator, he attempted to direct a signal toward Aldár.

He slipped into unconciousness, just as Vandalion approached. The Basileus Inquisitor activated his holocommunicator and the image of a Libertus in gleaming white uniform appeared.

Two days after the events of Guardians of the New Republic

Two days after the crew of the Auethnen Raptor rescued Apollo, Dané, Gorf and the Adjunct from the clutches of the Inquisitor, Arasah-Nui sat sadly in a shuttle as it touched down on Mou'Cyran. Joining her was a cadre of Republic Senators, who had joined her father in forming the Eastern Borderland Alliance. Though the young Cargura was still filled with sadness, she found some small comfort that the actions of Senator Apollo and his companions saved both her own life, and that of her father's colleagues. When the shuttle set down at the Senatorial Spaceport, Arasah-Nui looked around at display units, reporting news from across the galaxy. One story, played by all the reputable channels, was the emergence of an order of warriors known as the Aldárae Order. It appeared that Senator Apollo had successfully negotiated with the order to serve as the protectors of the Republic against the dark threats of the universe, including the threat posed by the demonic hordes of the Corruptus.

With the Borderland Alliance now firmly aligned to the New Republic, a sense of purpose washed over Arasah-Nui as she gazed out over Republic City below. Her father may have protested putting herself in danger, though she knew that he would be proud of her if she continued his legacy in her own way. With determination in her eyes, she promised herself that she would seek out this Order of Light and help them in their quest to bring justice to the Cluster.

Retrieved from "https://spore.fandom.com/wiki/Fiction:Cyrannian_Cold_War/To_Catch_a_Senator?oldid=738679"
Community content is available under CC-BY-SA unless otherwise noted.