United Order of Tophos and its Sublime Territories

The Cyranai Galaxy is one of the many satellite galaxies of Cyrannus. It is a peculiar dwarf galaxy, 11,560 light years in diameter and it is home to over 12 million stars, many of which can support life. Of all the satellite galaxies of Cyrannus, Cyranai is the closest, and yet it has only been recently explored. It wasn't until the days of the Great Cyrannus War that civilizations from around the Cyrannia Sector began colonizing the small galaxy, though these attempts would soon face difficulty due to the fiercely xenophobic galactic superpower, the Bisistar Domain.

Though the Bisistar are the undisputed masters of Cyranai, three other possible civilisations inhabit the periphery. In the galactic north, the Neraida Gigamatrix dwells while in the south, the Cyranai Hivemind and United Order of Tophos and its Sublime Territories stand as one of the few willing to deal with extragalactic exploration and colonization.

The Cyranai Galaxy is believed to have been formed soon after his parent galaxy, the Cyrannus Galaxy, and although it shares a similar orbit to the Quadrant Galaxies, it is located much nearer to Cyrannus, and is arguably smaller. The Bisistar have long been the puppet masters of the galaxy, controlling a great deal of Cyranai space, and politically manipulated, if not outright eliminating other species.

While Cyranai can be seen from Cyrannus quite clearly, the first contact with any of its civilizations began with the First Bisistar Invasion of Cyrannus, where it nearly destroyed the Pyrínan Republic, only to be finally repealed after devastating the Pyrínan Capital of Orbispira.

However, the knowledge of this invasion eventually slipped from the minds of Cyrannians, who later came to explore Cyranai in the Voyages of the Avenger. During these voyages, the United Republic of Cyrannus came into contact with the Bisistar, who drove them back to Cyrannus, starting another invasion centred on the Cyrannian Neraida.

When the Galactic Empire of Cyrannus was formed a year later, the Bisistar and the Grox ended their war with an unofficial truce. However, only a few months later, a new faction arrived in the galaxy, the New Ermitant Republic, fleeing from the newly formed Empire. True to their culture, the Bisistar decided to manipulate this friendly new nation. In the second year of the Dark Times, the Bisistar Queen began to prepare a war against the mysterious Neraida, a conflict bound to involve the galaxy at large.

The Cyranai Galaxy has long been under the near complete control of the fiendish Bisistar, who jealously guard this mantle against all possible threats. Particularily the local Neraida factions, though also some recent expeditions into the Cyranai Galaxy from its much larger parent, the Cyrannus Galaxy. However, they aren't the only faction native to the galaxy; two more notable empires make their home here. The New Ermitant Republic is a recent addition to the galaxy, fleeing from the expanding Galactic Empire of Cyrannus at the beginning of the Dark Times. Now, they are currently settling into their new home, under the constant watch of the Bisistar.

Cyranai is a rather small galaxy, certainly in comparison to its massive neighbour, Cyrannus and as such doesn't have nearly as much space as its parent galaxy. Nevertheless, it is broken up into many factions and hundreds of species call it home, some of which are finally coming to light, for good, or evil.

Unlike Cyrannus, Cyranai doesn't have a united power that dictates the law of the land, officially anyway. Unofficially, the dreadful Bisistar have infiltrated most of the galaxy's governments placing itself on the pedestal of the galaxy's most powerful civilization. However, two other major factions also inhabit the land, both of which have resisted the Bisistaran attempts at manipulation and external control: the Cyranai Neraida, and the Greater Cyranai Hivemind. The New Ermitant Republic on the other hand, is not so lucky, being firmly in the Bisistar's cunning gaze. 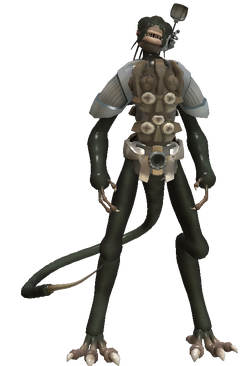 “Of course we'll help you settle in. Our only goal is peace and prosperity for all...”

The Bisistar, also known as the Twelfth Tribe are a highly advanced race of Capricyránae native to the Cyranai, a satellite of Cyrannus. They are highly intelligent, manipulative, deadly and misleading and often use this to trap and trick lesser races into following their will. It is because of this that, biologically the Bisistar are probably the most deadly Capricyránae race. Currently among the most feared factions in the galaxy, they are known for their constant struggle with the Grox. 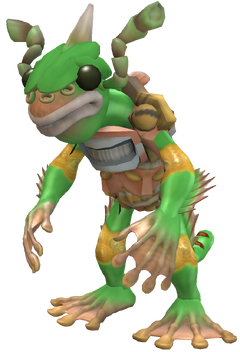 “Hello! Would you like a tour in our worlds? I'm sure you would love it!”

The Jinpolia are a friendly race which evolved next to their rivals, the Palda. The two species have been in a century-long war which was actually caused by the Bisistar. Bisistar agents and sleeper agents are currently in control of the Jinpolia's govermnent, leading them into war but never allowing them to destroy the Palda completely. It is though that the Bisistar do this out of pure sadism and amusement. 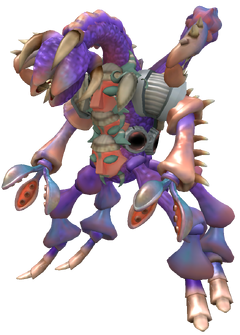 “You know nothing about us. No one does.”

The Palda are a very alien species which evolved next to their rivals, the Jinpolia. The two species have been in a century-long war which was actually caused by the Bisistar. Bisistar agents and sleeper agents are currently in control of the Palda's govermnent, leading them into war but never allowing them to destroy the Jinpolia completely. The Bisistar have a harder time in controlling the Palda due to not completely understanding their culture, but still do it to ensure their endless struggle, and the Bisistar's endless entertainment, continues. 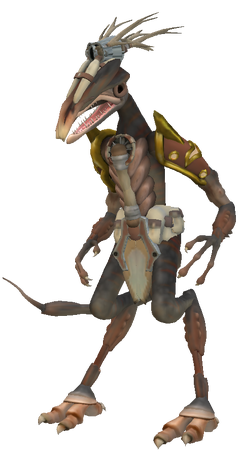 “I can't help but feel we are being watched.”

The Dogorahin are a physically strong race that had the misfortune of evolving in Bisistar space. As such, they were quickly discovered by their devious overlords, prompting having their society infiltrated by Bisistar agents and sleeper agents, disguised in synthetic Dogorahin skin. Overtime, these agents managed to infiltrate the highest reachs of the Dogorahin Government, becoming the empire's rulers. The Dogorahin were now firmly under Bisistar control, effectively making them their slaves. 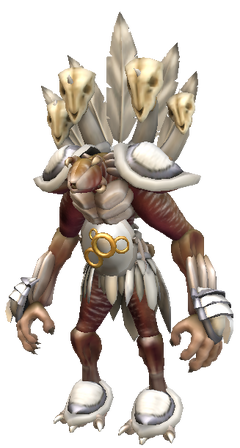 Mur Dozona are one of the physically strongest and toughest species in Cyranai, with formidable endurance and brutality; while highly aggressive, they are honest and honourable, loyal to their leaders and friends.

Mur Dozona were originally fairly primitive, with little resources on their planet to build a civilisation, as well as with limited intelligence to advance it; but when they caught the sight of the Realm of Bisistaran, the malevolent Twelfth Tribe had come to help the Mur Dozona, supplying it with technologies and metals, quickly making them an advanced space civilisation seemingly for altruistic reasons. However, at the point Mur Dozona have reached the apex of their power, Bisistar have carefully orchestrated the civil war within the Mur Dozona's civilisation which led to its collapse, splitting the once great race into numerous spacefaring tribes only possessing a glimpse of their former might, each led by their own chieftain - each a Bisistar agent in disguise.

Currently, the now-primitive Mur Dozona are used by the Realm as muscle, destroying those who cannot be manipulated for some reason or forcing them to make constructs for the Twelfth Tribe, using the species' legendary loyality. 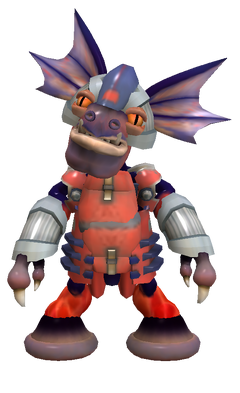 “The Republic is a beacon of hope in a sea of oppression and corruption.”

The New Ermitant Republic is a breakaway faction of Ermitant who fled the creation of the Galactic Empire of Cyrannus at the beginning of the Dark Times. Led by the peaceful and wise President Milinitt, the innocent and trade-loving Ermitant are currently being manipulated by their sinister Bisistar neighbours. 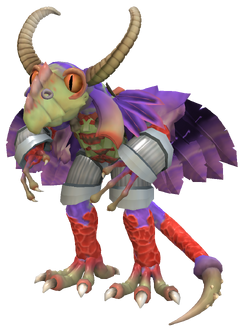 “We can trade, we can even ally, but touch our stars and you are dead.”

The Maneti are a neutral-aligned species who controls a small portion of neighbour territory of the New Ermitant Republic. While they are not aware of the Bisistar's existence, it's more than probable that they are already being targetted by sleeper agents. The Maneti are usually friendly and happily accept alliances, though they will proudly defend their territory if they come under attack. 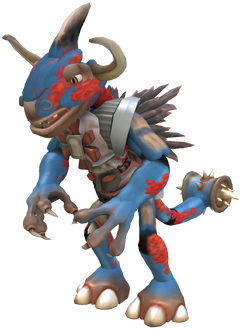 “The stars hold many secrets. We want to know as much as possible.”

The Virrecirai are a race of saurian creatures known to explore all the space around them in search of new discoveries. They are neutral and don't usually involve themselves with any other empire, unless they want to trade or learn more about them.

While this love for exploring keeps the Virrecirai people content, their expeditions are getting nearer to Bisistar space. As soon as the Realm takes notice, the Virrecirai will certainly fall for their manipulation like all the rest. 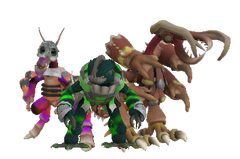 “We just want to be left alone!”

The Dhyrma Collective is a medium-sized coalition of three alike-species in the Cyranai Rim. They form a close-knit relationship with each other, and depend on each other for various needs. The Collective was ultimately destroyed and assimilated by the Neraida during the third year of the new Era, with the survivors entering a wormhole to another galaxy. 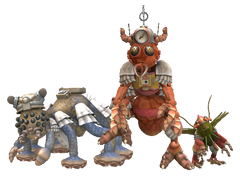 “Our enemy is strong, but united we stand a chance.”

The Cyranai Hivemind is a large, old civilization formed by the alliance between three civilizations which oppose the Bisistar. Thanks to their hive society, they are completely immune to the Bisistar's infiltration and manipulation, which allowed them to discover their enemy's true colours earlier than most. It is unknown when exactly they became spacefaring or united, but judging by their highly advanced technologies, it's possible that they have been around Cyranai for a long time. 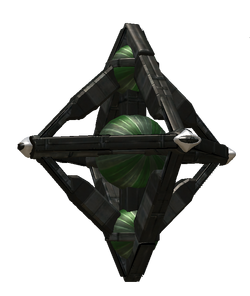 Like the Cyrannian Neraida and the Quadrantia Grox, the origins of the similar Cyranai Neraida are shrouded in mystery. Though smaller in size and less outwardly aggressive than the other two Neraida factions, they nonetheless have very advanced technology, the pinnacle of which is the Neraida Diamond, which has spelt the assimilation of countless Cyranai species. However, the Bisistar remain resistant to their technology, with the two being great rivals.

“My home galaxy. Were it not for my master's will, it would have already submitted to the will of the Empire. Soon I suspect, my wishes will be realised.”

“A frightening and unfriendly place to steer a starship...”

“Hopefully our lives will be better here...”